The Australian Grayling (Prototroctes maraena) also known as the Cucumber Fish or Cucumber Herring due to a cucumber odour when freshly caught is a small to medium sized freshwater fish only found in south-eastern Australia.

The Australian Grayling attains a maximum length of about 30cm but usually about 17-19cm. It is a soft rayed fish with the dorsal fin located behind the pelvic fin. Its coloration can be variable from dark brown to olive-green with greenish bronze sides occasionally with a steel blue sheen, silvery gill cover, silvery white to yellowish on the lower part of the head and body, fins are clear to grayish or straw coloured (Lake 1971; McDowall 1976; Cadwallader & Backhouse 1983; McDowall 1996).

The Australian Grayling is distributed amongst the coastal streams flowing east and south of the Great Dividing Range from near Sydney in New South Wales around to the Hopkins River in south-west Victoria. It is also found on Tasmania and King Island (Lake 1971; McDowall 1976). There have been isolated records extending into south-eastern South Australia in the past but it is now considered extinct in this area (Hammer 2001).

The Australian Grayling is predominately a freshwater fish but is considered diadromous because the fry have a marine phase (Crook et. al. 2006). The majority of its life however is spent in freshwater, inhabiting rivers and streams, usually in cool (5-26°C), clear waters with a gravel substrate and alternating pool and riffle zones (Bishop & Bell 1978; Berra 1982) but it has also been recorded to occur in turbid water with muddy-bottomed, heavily silted habitat as well (Jackson & Koehn 1988). Grayling can penetrate well inland, and have been reported over 100 km upstream from the sea (Jackson & Koehn 1988), provided there are no barriers to movement.

The onset of spawning conditions tends to vary between February to May depending on the river systems across its range.  Studies have found a drop in water temperature and an increase in flow are factors which trigger spawning conditions. A study at the Bunyip River in Victoria has demonstrated the existence of a downstream spawning migration and the importance of increased river flow as a migration cue for Australian Grayling (Koster et al. 2013).   Studies in the Barwon River (Hall and Harrington 1989)  recorded spawning from late May into early June  and found a drop in salinity is also a factor in spawning success as eggs are not tolerant of salinity greater than 5 ppt. 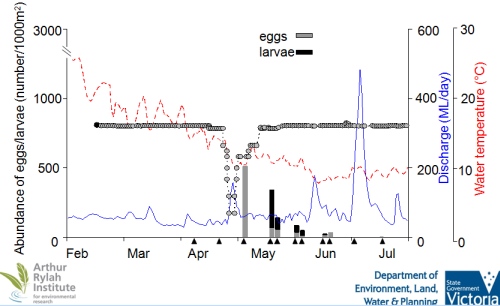 Studies into the lifecycle of the Australian Grayling, found that mature females caught from late March to early May had an average of 47,000 non-adhesive demersal eggs of 0.9 mm mean diameter (Berra 1982). Once released, the eggs settle in the crevices of the gravel bottom. The eggs hatch after 10-20 days and upon hatching the slender, buoyant larvae are about 6.5 mm long and swim actively to the water surface where they are swept downstream to brackish water in an estuary.

Larvae movement to the sea

Larvae probably move into the sea rather than remain in estuaries (Schmidt  et.al. 2010, Crook et al. 2006) where they remain for  about six months before migrating into streams. Juveniles ascend to the mid-reaches of the river where they spend the rest of their lives. (Berra 1982, Schmidt et al. 2011).

Research into the migration patterns of juvenile grayling into the freshwater environment was studied in four streams in south-east Australia across 3 years (2016–18) by (Koster et. al 2020). The studies found juvenile migration occurred from September to December, with peak abundances between late October and early November with the highest movement at intermediate flows (~100–150 ML day–1).

Life expectancy is thought to be about six years.

Australian Grayling has declined in abundance, reflecting of the poor state of its habitat which has suffered since European settlement.

The New Zealand Grayling Prototroctes oxyrhynchus is a close relative the of the Australian Grayling but now considered extinct.

Artificial barriers which restrict movement of the Australian Grayling include in-stream dams, weirs, and culverts or anything that impedes the upstream migration of juveniles or the downstream migration of fry. Failure to complete these migratory phases can cause local extinction in the section of river upstream from the barrier or impact on the overall viability of the population in a river.

Migrating juveniles congregate below barriers when their upstream passage is blocked and are much more vulnerable to predation by larger fish and birds, and capture by humans. It should be noted that there has been a considerable undertaking in recent years to minimise the impacts from artificial barriers in the south-west under the Fishways program which has reinstated fish passage to streams containing Grayling. This has been achieved via the Corangamite Catchment Management Authority.

The Australian Grayling depends on flooding events to spawn. Sites which are highly regulated and do not receive flooding flows (particularly during spring) may not provide conditions which are required to initiate spawning and the associated flows necessary to carry larvae to sea. Additionally, lack of flows through water abstraction may lead to a reduction in the period in which the rivers estuarine entrance is open to the sea. This may lead to the inability of larval grayling to access habitat necessary for their early development.

Flows in several of the priority streams (e.g. Barwon River, St George River, Barham River, Gellibrand River, Yarra River, Thomson River and Tarwin River) are subject to demands for water supply purposes which mean at times natural flows are reduced. When the seasonality and height of flooding is reduced through retention in dams, weirs and off-takes this can reduce the reproductive potential of the adults. If flooding doesn’t occur, females fail to spawn (O’Connor & Mahoney 2004). Missing a spawning season has major consequences for this species because it may spawn only once or twice in its entire life.

Drought conditions limit the high flow events required for spawning but also impact on base flows, particularly during summer when water quality can deteriorate resulting in low dissolved oxygen levels and higher than normal water temperatures. Australian Grayling require Dissolved Oxygen levels above 7 ppt and need to be able to access areas of stream with suitable levels of dissolved oxygen particularly in periods of low flows and high water temperatures.

With the onset of climate change, forecasts predicting reduced rainfall and more extreme temperatures are likely to result in a further deterioration of stream flow and in-stream conditions which places additional pressure on populations of Australian Grayling.

The condition of the catchment and activities being undertaken in the catchment has an impact on water quality. Sedimentation from erosion, washed out vehicle tracks, streamside disturbance and clearing of vegetation can increase sediment loads which smother instream substrates damaging feeding and spawning habitat. Movement of sediments from land into water is often accompanied with an increased flow of nutrients. Nutrients can also leach into waterways from agricultural run-off which causes excessive algal growth further damaging habitat

The formation of saline pools from low flows is a recognised problem in the Barwon River. Saline discharge from drainage schemes has also been recognised as an issue for Grayling in the Barwon River particularly during the spawning season, because the egg stage is sensitive to salinity above 5 ppt. Mortalities of larvae have been recorded above 10 ppt (Bacher & O’Brien).

A number of introduced fish species, occur within the distribution of Australian Grayling with Brown TroutSalmo trutta, considered to be a competitor/predator species. Brown Trout are known to prey on small grayling and are also likely to compete for habitat as grayling and trout occur in similar habitats (Jackson & Koehn 1988). Although streams containing grayling in south-west Victoria have not been stocked with Brown Trout for over 20 years self supporting populations of Brown Trout exist in most of the Otway streams. Larvae and juveniles may be highly susceptible to predation during their migration from marine waters through estuaries and then upstream to the adult habitats, where they pass through areas occupied by Brown Trout. Barriers and areas of low flow may also exacerbate susceptibility to predation.

Instream habitat provides shelter and food and is a vital part of the stream ecology. Removal of wood debris and snags has a detrimental impact on  grayling. Removal of streamside vegetation also impacts on instream ecology through reduced shelter, food and increased water temperatures and siltation.

Recreational angling is generally a low level impact but has the potential to be an issue when Australian Grayling aggregations occur below in-stream barriers and can be caught in large numbers.

At known priority sites Australian Grayling populations are monitored every three years to confirm status including (a) identification of the area and extent of populations; (b) estimates of the size and structure of populations; (c) inference or estimation of population change and (d) habitat quality. This work is carried out by CMA's in conjunction with DELWP, Arthur Rylah Institute.

Surveys in the Barwon River

The Barwon River has documented spawning for Australian grayling and is considered to support a significant population of this species. This species was recorded from the Barwon River in 1919, 1930 and 1981.  Surveys conducted since 1986 recorded numbers of grayling per survey which ranged from one to 30 individuals. Surveys conducted in 1987 recorded 4 and 17 Grayling, while in 1997, one to 14 individuals were recorded. The 1998 surveys recorded 1,1,3,4,5 and 8 individuals. Note that population abundance data for this species should be interpreted cautiously, due to inconsistencies with sampling and the patchy nature of populations. 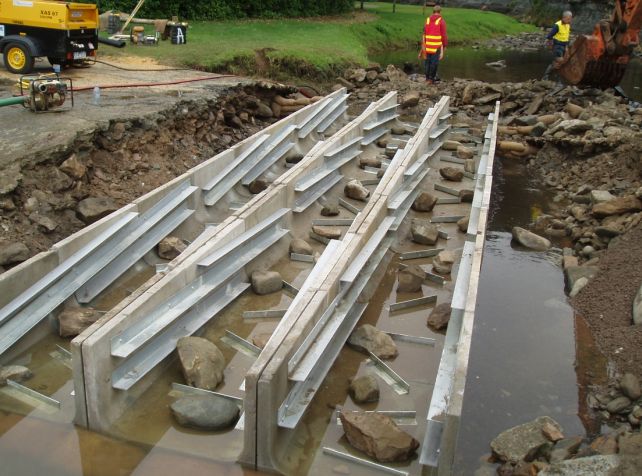 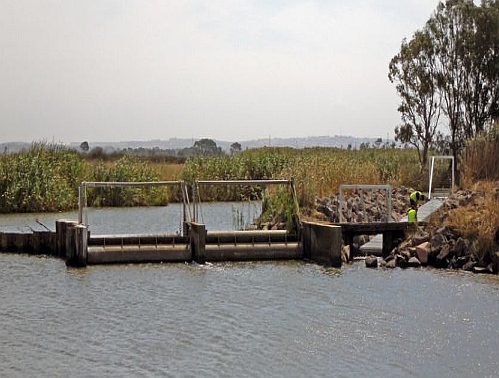 Installation of a vertical slot fishway on the Barwon River completed February 2013. Fishway entrance to the right of the main weir which separates freshwater river water from saline estuarine water.  Two days after operation thousands of fish were observed using the fishway therefore being able to complete their natural migrations within the river system. 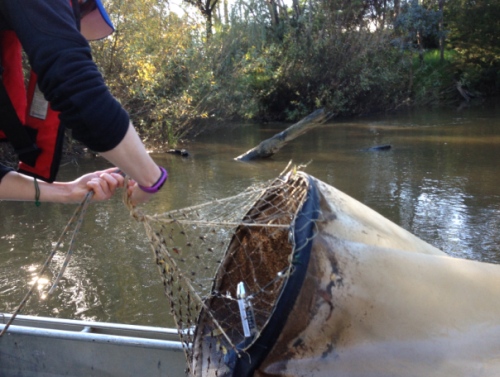 Retrieving a drift net set on the bottom of the river, used for the monitoring of grayling eggs as part of the Environmental Flows Monitoring and Assessment Program. Source:  West Gippsland CMA. Research has found spawning may be more likely in faster-flowing areas with gravel substrates and bottom set drift nets to be an effective means of collecting grayling eggs (Amtstaetter et al. 2015).

In order to assess the effects of environmental water flows on Australian Grayling movement and spawning the Arthur Rylah Institute conducted research between 2008 to 2015 in the Bunyip River, Yarra River, Thompson River and Tarwin River. Studies focused on determining flows necessary to stimulate movement and downstream spawning migrations from March to May.

Findings from the research confirmed that an increase in flow triggers downstream migration and spawning of Australian Grayling. Even modest flows of environmental water added to a low river flow for more than 5 days can result in movement and spawning.

Environmental flows in 2015/16 are attributed to the first recorded spawning of Australian Grayling in the La Trobe River which occurred in 2015.