The Barking owl (Ninox connivens) is regarded as being a moderately large owl about 40cm in length; it has bright yellow eyes and almost no facial mask, which is typical of the ‘hawk owl’ family. Viewed from the front its chest and abdomen are white with brownish-grey vertical streaks. Upper wings and back are brown-grey with white spots, flight feathers and tail are barred. 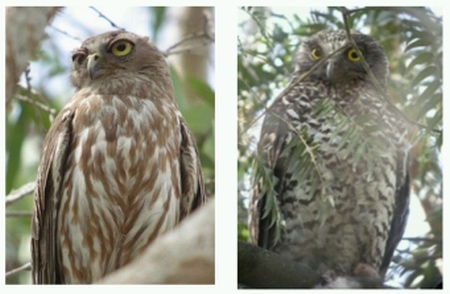 In Victoria, the Barking Owl could have an estimated population size of fewer than 50 pairs (Silveira 1997) with North East Victoria being the remaining stronghold area. Once recorded in association with forest woodland areas across much of Victoria, particularly the western part of Great Dividing Range to the Grampians, North East Victoria and the ranges to the north east of Melbourne, the Barking Owl is now considered extremely rare in many areas of Victoria.

The Barking Owl inhabits open woodland forest habitats where forests adjoin farmlands, effectively creating an open farmland-woodland mosaic. Use of forest interior habitats is less common; in particular the use of extensive areas of moist forest habitat is uncommon with drier woodlands, particularly box-ironbark woodlands being the most frequented habitat.

Surveys conducted in 1998-1999 found that hollows were two three times more prolific at sites where Barking Owls were recorded compared to no owl sites. It was also noted that Barking Owl habitat has a strong spatial association with hydrological features such as rivers and wetlands (Taylor & Kirsten 1999).

Nesting occurs from July to October, during which time the Barking Owl uses large tree hollows producing between 2-3 young.

Diet comprises small mammals (rabbit, gliders, rodents), birds, bats, and insects, however information on diet still remains limited and may include other prey. The relationship between occurrence of hollows in trees and Barking Owl habitat also applies to habitat for the production of prey species, some which are also dependent on hollow trees eg. gliders, possums, rosellas, bats etc.

Barking Owls are thought to be sedentary, probably remaining in the same territory all year around and from year to year. They have been observed to hunt reasonably close to their nest site (1-2km) but distances may alter depending on habitat quality Studies have found home ranges in semi arid areas averaging 2,000 ha (Kavanagh and Bamkin 1995).

Nocturnal studies across the western Victoria in 1998-1999 recorded Barking Owls at only 11 sites (4.3%) of 257 carefully selected sites and found only 6 sites (8%) of 75 sites where they had been reported during 1980’s and 1990’s which could indicate a continuing deterioration in the species status (Taylor & Kirsten 1999). A similar trend of decline has been recorded in New South Wales (NPWS 2003) and in areas of North East Victoria where there was a  population decline in the Chiltern - Mt Pilot National Park of 60% between 2003 to 2005 (Schedvin 2008).

Results from surveys conducted by Taylor & Kirsten (1999), highlight the need for closer examination of sites previously recorded on the Victorian Wildlife Atlas. There are many sites within the South West of Victoria for example that had previous records which were not confirmed in the 1998-1999 survey, raising the possibility that Barking Owls could have been lost from those locations (see below).

Being a top order predator the Barking owl can be impacted upon by loss of prey species caused through habitat degradation and fragmentation, logging, firewood harvesting  wildfires and excessive burning. Loss of suitable hollow bearing trees has a twofold impact on both nesting sites and habitat for prey species such as birds and small mammals. Retention of vegetation containing hollows is particularly important on the forest- private farmland ecotone.

Fox predation and competition for prey species by foxes and feral cats have been identified as threatening processes in NSW.  Feral honey bees invading hollows, secondary poisoning from pesticides and mortality from collision with barbed wire fences and wires have also been identified as potential threats (NPWS 2003)

Decline of non-native prey such as rabbits, which may have filled a prey shortage in areas suffering a reduced diversity of prey, for example sites where habitat has been degraded and native prey has been diminished.

A common theme from both research and natural resource management sectors is the need to improve understanding of this species abundance, distribution and ecological requirements.

There is a need to clarify the status of Barking Owls across Victoria.  There are a number of old records which require detailed survey to ascertain if Barking Owls are still present e.g. sites from Table1.

The greatest benefits for barking owls can be derived from habitat rehabilitation efforts if they are begun during the mopping up phase of fire suppression operations. For example, burning snags and hollow trees should in the first instance be extinguished, wherever possible, rather than felled. This will be of benefit to barking owls and many of their prey that also rely on tree hollows for shelter and breeding sites Schedvin (2008).

In 2006 a short 8 nights survey was carried out in suitable habitat along the Murray River at Walpolla Island in Victoria’s North West. The survey was focused in the vicinity of where Barking Owls had been recorded in 1995 but no Barking Owls recorded (Hurley 2006).

A long term study was undertaken in a semiarid area (620mm annual rainfall) in the Pilliga State Forest in northern NSW which found home ranges averaging 2,000 ha (Kavanagh and Bamkin 1995).

A post-fire assessment of the January 2003 wildfires in the Chiltern - Mt Pilot National Park in North East Victoria assessed impacts on barking owls identified that the population had declined by 60% to 12 breeding pairs (Schedvin 2005). In 2007, four years after this initial assessment, another assessment of the Chiltern-Mount Pilot barking owl population was undertaken. This revealed that barking owl pairs continue to be lost from the area. The population is now down to 10 active sites, of which 9 are breeding pairs. If the current trend continues Barking Owls will be completely lost from the area within the next 30 years (Schedvin 2008).

Barking Owl Carrying Capacity - in order to implement a landscape approach to barking owl conservation, it is important to be able to evaluate the barking owl carrying capacity of different environments (i.e., how many breeding barking owl pairs will an area support?

Promotion of hollows - it is more likely to be the availability of hollows for prey that is limiting Barking Owls.  There needs to be a study to investigate the efficacy of promoting hollow formation in eucalypts (perhaps through injuring trees).