The Basalt Rustyhood (also known as the Basalt Greenhood) was only described in 1993 (Jones & Clements 1993). It is regarded as being one of the most threatened orchids in Australia and is endemic to the south-west of Victoria.

Flower stem grows to 30cm tall with 3-5 closely sheathing stem leaves. It has up to fifteen flowers 1.5cm in length, which are translucent with prominent green or greenish-brown stripes. Between 8 to 15 dull green basal rosette leaves (30mm long by 10mm wide) are closely arranged at the base of the plant, they are more pronounced during the non-flowering period and usually withered by the time of flowering.

The Basalt Rustyhood is only known from two locations in close proximity to each other in the Dundonell area of the Victorian Volcanic Plains bioregion.

The Basalt Rustyhood grows in a 500-700 mm rainfall area on 'stony rises' on the western basalt plains. It is found on shallow, sometimes bare, soil surrounded by basalt rocks occurring in native grasslands containing Kangaroo Grass Themeda triandra and Common Everlasting Chrysocephalum apiculatum.  The orchid's new growth commences in late summer to early autumn and the rosette of the orchid actively grows from May to October. Flowering takes place from November to January subject to seasonal conditions. Small flies or fungus gnats carry out pollination. 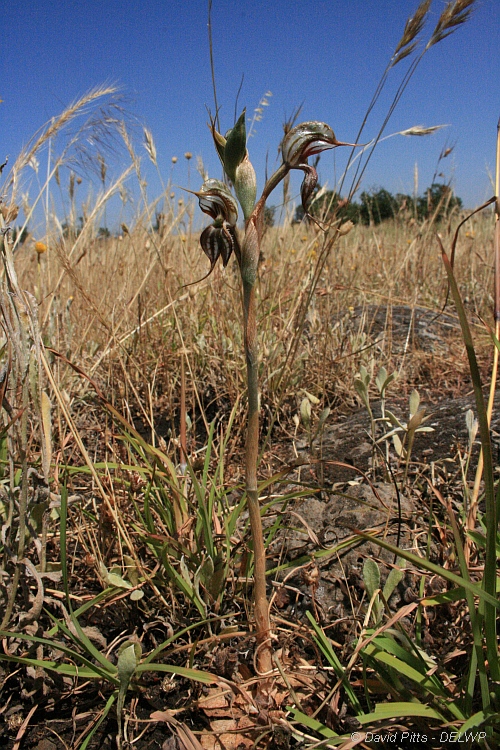 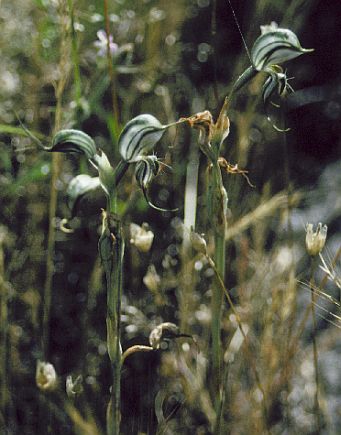 At present there are no known populations in conservation reserves which means close co-operation with private land holders and the Moyne Shire is required to ensure the long term viability of this species.

Weed invasion is considered a major threat to the Basalt Rustyhood, particularly as it grows in such a limited ecological niche, which includes sparse ground cover that can be easily occupied by weedy species. Physical disturbance to soil in and around the population has the potential to increase weed invasion.  Broad scale spraying near these populations may increase in the presence of weeds and result in loss of the population. Particular care needs to be taken with roadside works and the movement of stock in the area. Grazing by rabbits may impact on the success of flowering and development of seed. Genetic isolation and limited natural pollination may also have longer-term consequences.

Detailed population monitoring of the site has occurred since 1996 and land managers are aware of the delicate state of the population.

Hand pollination has been use to successfully produce viable seed as natural pollination rates are very low. seed has been collected and stored in the Victorian Conservation Seed Bank at the Royal Botanic Gardens. 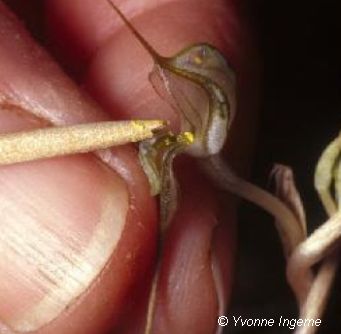 Hand pollination of Basalt Rustyhood is undertaken to increase the success of producing viable seed.

Develop and implement a weed control plan for this site. This will involve a full evaluation of the weed flora on the site as well as an evaluation of all weed management options, taking into consideration the species involved, population sizes, locations, proximity to the orchids, etc.

Establish photo points at the site to provide useful information on recruitment success and orchid development. A monitoring protocol, specifically dealing with this site, the Basalt Rustyhood and other ''Pterostylis'' populations will also be prepared to ensure protection of the populations whilst undertaking monitoring.

Updates on outcomes of seed collection and propagation.