The Black-chined Honeyeater  is a small to medium-sized, olive-backed honeyeater weighing about 20g and around 15.5 cm in length with a stocky build, short tail, and a short, robust and slightly down-curved black bill (Keast 1968; Higgins et al. 2001; Willoughby 2005; Pizzey & Knight 2012). It is distinguished from other Melithreptus honeyeaters by its black cap, black chin, white nape band extending to the eye and blue skin above the eye.

Both sexes are alike; however, juveniles are a duller version of adult birds, with a less conspicuous blue eye apteria, a brown head and an orange bill that darkens to black within their first year (Higgins et al. 2001).

The Black-chinned Honeyeater can be difficult to detect as it is a cryptic honeyeater that moves swiftly through the canopy (Lollback 2007; H.A. Ford, pers. comm. 2014). It's clear, high pitched, gurgling call is heard infrequently (Lollback 2007).

BirdLife Australia’s Atlas data suggests that M. g. gularis occupies an area of at least 5,400 km2; however, this estimate is likely to substantially understate the actual extent of occurrence which may be as high as 11,000 km2 (Garnett et al. 2010).

In Victoria, the Black-chinned Honeyeater  is mainly found on the northern slopes of the Great Dividing Range. 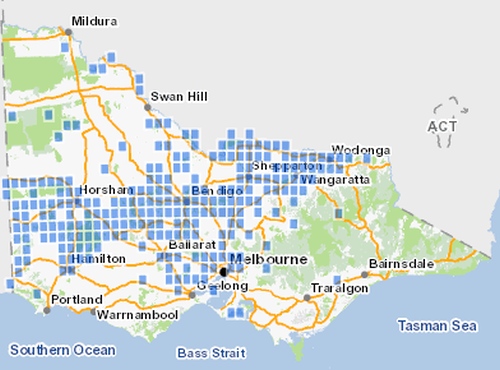 All known records of the Black-chinned Honeyeater in Victoria. Source: VBA 2016

Note: this is not a full list of LGA's where the Black-chinned Honeyeater has been recorded in Victoria but those with > 50 records.

The Black-chinned Honeyeater requires large areas of high quality vegetation (H.A. Ford, pers. comm. 2014; G.W. Lollback, pers. comm. 2014) and is thought to be a habitat specialist (Lollback 2007). It prefers dry, open temperate forests dominated by Box and Ironbark species – which are known to be an abundant source of nectar and invertebrates (Lollback 2007) – as well as River Red Gum Eucalyptus camaldulensis in areas with an annual rainfall of 400-700mm (Garnett et al. 2010; Higgins et al. 2001). Within a fragmented landscape, the species will also utilise paddock trees as a food source (Gibbons & Boak 2002).

Melithreptus honeyeaters have well-developed ectethmoid-mandibular articulation; a characteristic that enables species in the genus to move both mandibles simultaneously (Lollback 2007; Lollback et al. 2008; Willoughby 2005). This enables the Black-chinned Honeyeater to efficiently prise apart bound leaves in search of its prey, predominantly Lepidoptera larvae, a food source not readily accessible to other honeyeater genera (Lollback 2007). This high degree of specialisation suggests that the foraging niche of the Black-chinned Honeyeater is at a finer scale than that of most other honeyeater species and may explain why this species has a larger home range and travels further to forage (Willoughby 2005; Lollback 2007; H.A. Ford, pers. comm. 2014).

It may also help to explain the Black-chinned Honeyeater’s rarity, in that it feeds on a narrow range of resources that are themselves not abundant (Lollback 2007; Lollback et al. 2008). This may be a disadvantage in fragmented landscapes where resources are sparse or of inferior quality (Willoughby 2005).

The Black-chinned Honeyeater Melithreptus gularis gularis is declining across most of its range, including in Victoria (Garnett et al. 2010).

Reduced breeding success and low juvenile recruitment (Lollback 2007) due, in part, to the increased predation that occurs along woodland edges (Lollback et al. 2010), as well as stochastic events and interspecific competition from larger or aggressive honeyeater species such as the Noisy Miner (NSWSC 2016; TSSC 2013; Hastings & Beattie 2006; H.A. Ford, pers. comm. 2014).

Anthropogenic climate change - this has the potential to impact on Black-chinned Honeyeater populations whether through variations in the timing and success of breeding, changes to the subspecies’ geographic range, or through a reduction in the availability and nutritional value of food sources (Chambers et al. 2005; Olsen et al. 2007; MacNally et al. 2009; Watson 2011). However, more research is needed to investigate the potential impacts of a changing climate on the Black-chinned Honeyeater, as well as the subspecies’ potential to adapt.

In Victoria, the removal of native vegetation is regulated under the State’s Planning Scheme, and more specifically, by the Native Vegetation Permitted Clearing Regulations. These regulations require that a permit be obtained to remove, destroy or lop native vegetation and that, where a permit is granted, an offset of equivalent vegetation type, amount and attributes is required (DELWP 2016).

A range of projects and programs are undertaken on an ongoing basis throughout Victoria by conservation groups and natural resource managers including Landcare, Conservation Management Networks, NGOs e.g. Birdlife Australia and similar organisations and volunteer bodies. While not specifically targeting Black-chinned Honeyeaters, these projects and programs benefit a range of species in Victoria’s temperate eucalypt woodlands by expanding and rehabilitating habitat and restoring landscape connectivity.

Through habitat protection, restoration and expansion, stabilise populations of the Black-chinned Honeyeater in Victoria to ensure survival of the subspecies over the long term.

This page has been adapted from material provided by D. Saxon-Campbell, Federation University - Australia, who received contributions from