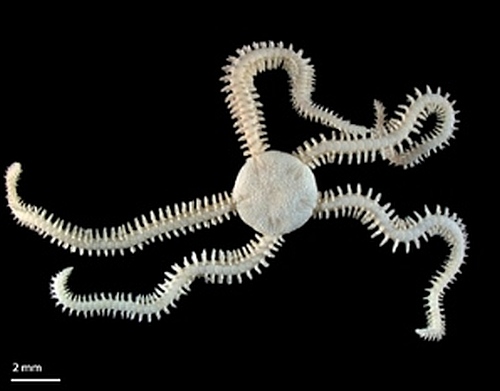 Brittle Stars are part of the benthic (bottom feeding) fauna found in the marine environment. They are broadly referred to as Echinoderms, classified in the Phylum Echinodermata which are marine animals having  radial symmetry with five parts, often with spines. They have a unique water vascular system and depending on the species have an internal or external calcite skeleton.

The Phylum Echinodermata  is divided into five classes;

The name Ophiuroidea is derived from the Greek words ophis, meaning snake, and oura, meaning tail, in reference to the often thin, snail-like winding or coiling arms of the brittle stars.

Worldwide the class Ophiuroidea are currently divided into two orders and 16 families; the largest are Amphiuridae (467 species), Ophiacanthidae (319 species) and Ophiuridae (344 species), and the majority of the species (1883) belong to the order Ophiurida (Stöhr  et al. 2012).

There are at least 40 species of brittle stars in Victorian waters. None are endemic to Victoria but two species Amphiura triscacantha and Ophiocomina australis are considered Vulnerable and Listed under the Victorian Flora and Fauna Guarantee Act 1988.  Both species have extremely limited distribution and found in association with seagrass habitat which is sensitive to environmental degradation (O’Hara & Barmby 2000)

The Brittle Stars Amphiura triscacantha and Ophiocomina australis have central disks about 1 cm in diameter. Brittle Star taxonomy is quite detailed with a number of features used to identify the various species e.g. disk and arm structure and cover, mouth and jaw structure. 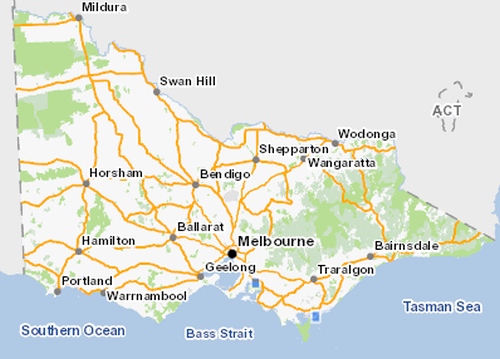 The Brittle Star Amphiura triscacantha of Brittle Star is only known from a small number of areas in southern Australian waters, Spencer and St Vincent Gulfs in South Australia and two locations in Victoria;  Nooramunga (Gippsland)  and possibly Western Port Bay (French Island Marine National Park)  although it is thought the Western Port Bay population is extinct due to decline of seagrass beds. 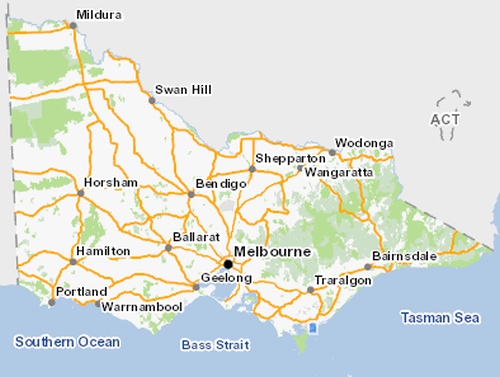 Ophiocomina australis is only known from a small number of areas in southern Australian waters, Spencer and St Vincent Gulfs in South Australia and one location in Victoria in the Nooramunga area (South Gippsland) (O’Hara & Barmby 2000) .

Brittle Stars are secretive animals which hide under rocks or in crevices, bottom substrates or conceal themselves amongst seagrass and other marine organisms.  They tend to be more active at night, possibly reducing their chances of  being eaten.

Neither species is considered inter-tidal having a depth range of 1-12 m (AFD 2017).

Brittle Stars move around by using their arms rather than movement of tube feet as in sea stars as they lack suction cups,

Brittle Stars show a broad range of feeding types, such as suspension-feeding, deposit-feeding, scavenging and predation, all designed for a more selective nutrient intake.  They have been found to ingest fine particles as well as a wide range of animal and plant fragments indicating an omnivorous habit  (Stöhr  et al. 2012)

Nutrients - nutrients increase the growth of undesirable algae which can smother seagrass beds, depriving them of light resulting in severely degraded health or total loss.

Sediment -  increased turbidity as a result of sedimentation is of particular concern in Western Port Bay (Edmunds et al. 2009). It is also thought the extensive loss of seagrass in the 1970s and 1980s is attributed increased turbidity.

Toxicants - chemical toxicants can accumulate on bottom substrates and be consumed by detritus feeders such as Brittle Stars.

Oil pollution - heavy oil sinks to the sea floor which can smother seagrass beds and micro habitats. It can also be ingested by marine organisms in minute quantities which can accumulate over time in the ecosystem.

Salinity - flood water has the capacity to alter salinity in shallow embayment's.

Acidity - Changes in water pH can occur from oxidation in acid sulfate soils This can lead to a significant decrease in pH within water runoff.

Physical disturbance - direct loss of seagrass habitat from dredging and dragging of anchors.