The name flying fox is derived from the shape of their face but they are not related to foxes in any way and are not vermin. They are a native species, listed as vulnerable, have a diet of fruits and nectar and are beneficial to the environment.

The Grey-headed Flying-fox occupies at least two permanent camps in Victoria and seasonally disperses across parts of the state forming roosting camps from which it travels to feed on a variety of fruits, nectar and pollen from plants and trees in areas of native vegetation and also cultivated vegetation in back yards and parks.

The Grey-headed Flying-fox is the largest member of its family, weighing up to 1kg (600-1000g), with a wing span up to 1metre. They have a reddish-yellow mantle that completely encircles the neck, with a grey or white-grey head, and dark brown shaggy fur which extends to the ankle (Strahan 1995).

There are at least 11 Grey-headed Flying-fox roosting areas or camps in Victoria, 8 of these being in East Gippsland which also has the largest permanent and birthing camp at Dowell Creek near Mallacoota.

Most Victorian records are concentrated between March-June but may extend from September to July (Menkhorst 1995; Van der Ree et al. 2006)

Dowell Creek - Predominantly used in late-summer to autumn, used by large numbers in some years.

Other areas of Victoria

Yarra Bend (moved from Melbourne's Royal Botanic Gardens in 2003) which had been established since 1986 is the second largest camp in Victoria> It has year round occupation and birthing.

Geelong, Eastern Park - This Flying-fox camp became established in 2003 and has year round occupation and birthing during October. It is the most southern range of a breeding population in Australia. Peak numbers at Geelong occur from January to April where a maximum of about 18,000 have been recorded but generally the summer population has been around 5,000 individuals with a reduced winter population (Braverstock pers. com.).

Bendigo, Rosalind Park - Flying-foxes present in winter months but numbers fluctuate from several thousand to the highest count 32,000 in June 2010. Reported that numbers significantly down in 2014/15.

The Grey-headed Flying-fox is typically found near a permanent water source and exist in a range of habitats, including riparian forest, mangroves, urban, or suburban areas (Nelson 1965; Lunney & Moon 1997; Hall 2002). Camps are often in gullies, near water, and in habitats with a dense tree cover and are likely to be found in parks (McDonald-Madden et al. 2005).

The Grey-headed Flying-fox is a partial migrant, using winds to facilitate long distance movements, with round trips reaching up to 2000km (Tidemann & Nelson 2004). Large scale movements across the range are driven by a lack of resources and populations will migrate with response to the flowering and fruiting of food plants (Eby 1991). Breeding studies also show movements of 250 km over 15 months, with the furthest being 978 km in 5 months (Webb & Tidemann 1996).

The Grey-headed Flying-fox is nocturnal, usually travelling 5-15 km to forage, although they are able to travel for distances up to 50km from their roost site (Tidemann & Nelson 2004; Spencer et al. 1991). They feed on nectar and pollen of native species in the families Myrtaceae and Proteaceae which are also sometimes supplemented with leaves (Parry-Jones & Augee 1991; Eby, 1991). They will also feed on fruit from introduced trees, cultivated fruit trees and fruit from native species such as the Lilly-pilly.

There is now a constant and reliable source of food for flying-foxes in Melbourne with 13 species of trees known to be in the diet of flying foxes indigenous to Melbourne, plus 87 species planted along streets and 45 species in backyards all adding to the diet availability. Flying-foxes feed on about 90% of the street tree species which are planted. There is also secure year round water from watering in parks and gardens (SWIFFT video conference Oct 2012) .

The peak mating season runs from March to April with large aggregations being formed. These aggregations comprise individuals from a number of groups which results in a high degree of gene flow between colonies, suggesting one massive interbreeding population (Eby 1991; Spencer et al. 1991; Webb & Tidemann 1996). Individuals are identified using sight and smell (Hall & Richards 2000). Vocal communication is highly sophisticated, with over 20 situation-specific calls used (Strahan 1995).

Most births occur in October; young are carried on the ventral surface of foraging mothers for 4-5 weeks after birth, and then left in the camp at night to be suckled on the mothers return (Strahan 1995).

There were a few records of the Grey-headed Flying-fox in Victoria between 1884 to 1986 but in 1986 there was a very significant increase in numbers with about 100 animals setting up camp in Melbourne which has now turned into an established year round population. The heating up of Melbourne’s environment due to more concrete and bricks may have created a heat island effect which has favoured the establishment of this sub-tropical species in Melbourne (SWIFFT video conference Oct 2012).

Declines in Grey-headed Flying-foxes have occurred since the 1920’s (Ratcliffe 1931) and are linked to clearing for agriculture (Richards & Hall 1998). There has been a reported loss of 35% in the 1992 -2002 decade (Martin & McIlwee 2002). Loss of native vegetation across its range and increased human habitation has increased pressure on this species to forage in cultivated landscapes with orchards, parks and domestic fruit trees. The clash between this species and humans is exacerbated by non-flowering of native species due to drought or loss of nectar (Richards & Hall 1998).

Outside of Victoria the culling of animals in orchards is a contributing factor to the decline of populations. At least 240,000 individuals could have been culled between Sydney and Queensland from 1986-1992 (Wahl 1994). Young will often starve under these circumstances if the mother is shot and doesn’t return to suckle the young at the roost site (Strahan 1995). In 2003-2004, the Australian Government ruled that in any of the participating states, shooting of Flying-foxes on orchards may occur, but only in accordance with the guidelines for the permits or licenses necessary (DEH 2003). This ruled that the total number killed in the 2003-2004 season would not exceed 1.5% of the lowest agreed national population estimate for the species (DEH 2003). This was deemed to be an acceptable culling level that would not jeopardize the recovery of the species. This figure undergoes review on an annual basis in order to maintain populations at a sustainable level (DEH 2003).

The Grey-headed Flying-fox is protected from culling in Victoria, although destruction permits may be issued for individual cases.

The population shift from its natural range to highly urbanized areas has often been mistaken as an expansion in population (Eby & Lunney 2002), but urban populations are subject to higher mortality through interaction with humans and human-related objects, such as power lines (Divljan et al. 2006).

Heat stress on young Flying-foxes has proven to be a threat with many hundreds of mortalities occurring in Victoria during heat wave conditions experienced during the 2008/09 summer.

Monitoring of the Melbourne Flying-fox colony occurs on a regular basis and is directed by the Australian Research Centre for Urban Ecology (ARCUE). Static counts of Flying-fox numbers at the roost site are conducted each fortnight, and flyout counts once per month (Van der Ree, pers. comm.; Davidson, pers. comm.). The number of young emerging at the roost site of the colony is counted every 10 days during the breeding season and the number of dead flying foxes occurring throughout the region are also taken sporadically over winter, and every 10-14 days during summer (Van der Ree, pers. comm.).

A standard monitoring techniques for Grey-headed Flying-fox has been developed and used by each Flying-fox camp manager.

Liaison with interstate staff undertaking the National counts is undertaken so that they can let the Victorian monitors know when Grey-headed Flying -foxes are migrating into Victoria.

The Nature Conservation Council of New South Wales has a Flying-foxes Policy to assist conservation of Flying-foxes through identification and protection of important flying-fox habitat, better public education, and implementation of management measures (NCC 2010)

The National Flying-fox monitoring viewer provides information on the location of current camps.

Most of the effort is focused on the Yarra Bend colony; 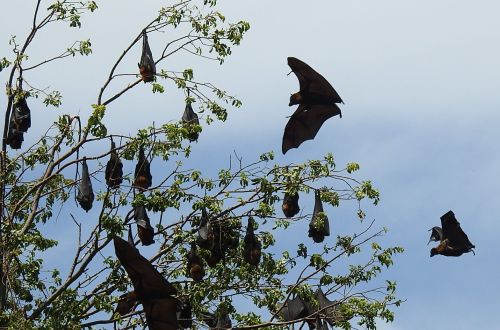