The main breeding season is July to November, usually with 2-3 broods.  Nests are made in a tree fork or crevice up to 5 metres above ground. They breed in monogamous pairs, staying together during the whole breeding season. They are often observed in small groups and pairs. 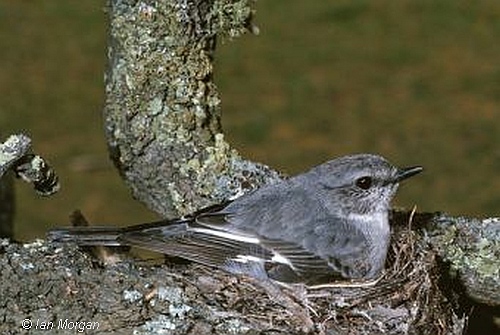 Hooded Robins were once fairly common, but populations have been reduced to about a quarter of the previous distribution.  There has been a decline in numbers since the 1980's in Victoria, with the rate being less than 7% in all years since detailed records began (DCE Victoria 2000).

The Hooded Robin is still found in the western districts of Victoria, with the most sightings being in the very North West, near Mildura.  Numbers have declined near Melbourne, North-East Victoria, West Gippsland and East Gippsland districts where they once previously occupied. Observations in the Chiltern-Mt Pilot National Park area have detected a decline in the Hooded Robin population over recent years.

It is thought tthe Hooded Robin is locally extinct on the Mornington and Bellarine Peninsulas, French Island and in West Gippsland.

Feral cats and foxes - these are considered major threats because the Hooded Robin forages at ground level, becoming easy prey. Nests are within 5 m of ground level which can be within reach of cats.

Competition - the Noisy Miner Manorina melanocephala is considered a major competitor species which can drive away Hooded Robins particularly from their preferred woodland edge habitat and woodland remnants.

Firewood collection - in certain bushland areas this is a problem due to the loss of woody debris including branches, logs and stumps which provide habitat for invertebrates and food for the Hooded Robin.

Weather - climate change has been raised as an issue which could lead to changes in vegetation, particularly invasion by a range of weeds and exotic grasses which have the potential to degrade feeding habitat.

Major initiatives are centred around protection of habitat and control of foxes and feral cats.

The care of habitat on private land is extremely important and encouraged through Landcare, Land for Wildlife, Whole farm planning, Catchment Management Authorities, Trust for Nature covenants and Birdlife Australia.

Parks Victoria manages substantial areas of reserves containing Hooded Robins. In conjunction with the Department of Environment, Land, Water & Planning (DELWP) there is an emphasis to manage areas where Hooded Robins are present through:

Important Local Government Areas for conservation of the Hooded Robin

Parks Victoria is responsible for managing reserve areas but fringing private land with remnant woodlands also plays a key role because it comprises important habitat for the Hooded Robin.

The Hooded Robin was included as part of a woodland bird banding project at Snape Reserve in the Wimmera, conducted by Jonathan Starks formerly at the Wimmera Catchment Management Authority. 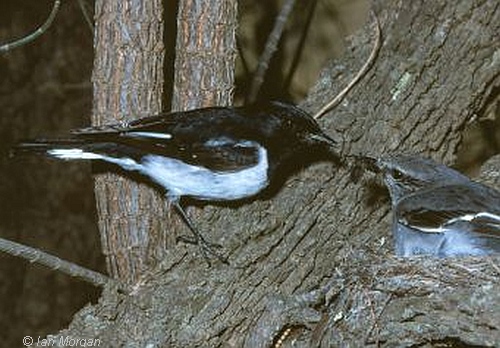