The Malleefowl Leipoa ocellata is a ground-dwelling bird about the size of a domestic chicken (to which it is distantly related). The family Megapodes are unique amongst birds in that their eggs are buried and incubated by external sources of heat such as heat from the sun, geothermal activity, or decomposing leaf litter.

The Malleefowl occupies semi-arid mallee scrub on the fringes of the relatively fertile areas of southern Australia, where it is now reduced to three separate populations, located in the Murray-Darling Basin, the area west of Spencer Gulf along the fringes of the Simpson Desert, and the semi-arid fringe of Western Australia's fertile south-west corner.

In Victoria, Malleefowl were once widespread in mallee shrublands in the north-west, in central Victoria, and as far south as the Brisbane Ranges and Melton near Melbourne (Campbell 1884, 1901; Mattingley 1908). Within the past century, the Malleefowl has undergone a marked reduction in its range.

Preferred habitat is semi-arid mallee eucalypt woodlands on sandy soils, but also occur, or once occurred, in a range of other to arid shrubland communities on (Garnett & Crowley 2000).

Malleefowl are shy, wary, solitary birds that usually fly only to escape danger or reach a tree to roost in. Although very active, they are seldom seen as they freeze if disturbed, relying on their intricately patterned plumage to render them invisible, or else fade silently and rapidly into the undergrowth (flying away only if surprised or chased).

Pairs occupy a territory but usually roost and feed apart: their social behaviour is sufficient to allow regular mating during the season and little else.

In winter, the male selects an area of ground, usually a small open space between the stunted trees of the Mallee, and scrapes a depression about three metres across and just under a metre deep in the sandy soil by raking backwards with his feet. In late winter and early spring, he begins to collect organic material to fill it with, scraping sticks, leaves and bark into wind-rows for up to 50 metres around the hole, and building it into a nest-mound, which usually rises to about 0.6m above ground level. The amount of litter in the mound varies, it may be almost entirely organic material, mostly sand, or anywhere in between.

After rain, he turns and mixes the material to encourage decay and, if conditions allow, digs an egg chamber in August. The female sometimes assists with the excavation of the egg chamber, and the timing varies with temperature and rainfall. The female usually lays between September and February, provided there has been enough rain to start organic decay of the litter. The male continues to maintain the nest-mound, gradually adding more soil to the mix as the summer approaches (presumably to regulate the temperature).

Males usually build their first mound (or take over an existing one) in their fourth year, but young males tend not to achieve as impressive a structure as older birds. Malleefowl are generally thought to mate for life, but exceptions are not unknown. Although the male stays nearby to defend the nest for nine months of the year, they can wander at other times, not always returning to the same territory afterwards.

Females lay a clutch of anywhere from two or three to over 30 large, thin-shelled eggs, mostly about 15; usually about a week apart. Each egg weighs about 10% of the female's body weight, and over a season it is common for her to lay 250% of her own weight. Clutch size varies greatly between birds and with rainfall. Incubation time depends on temperature and can be anywhere between about 50 and almost 100 days.

Hatchlings use their strong feet to break out of the egg, then lie on their backs and scratch their way to the surface, struggling hard for five or ten minutes to gain 3 to 15cm at a time, and then resting for an hour or so before starting again. Reaching the surface takes between 2 and 15 hours. Chicks pop out of the nesting material with little or no warning, eyes and beaks tightly closed, then immediately take a deep breath and open their eyes before freezing motionless for as long as 20 minutes.

The chick then quickly emerges from out of the hole and staggers or rolls to the base of the mound, disappearing into the scrub within moments. Within an hour it will be able to run reasonably well; it can flutter for a short distance and run very fast within two hours, and despite not having yet grown tail feathers, it can fly strongly within a day.

Chicks have no contact with adults or other chicks: they tend to hatch one at a time and birds of any age ignore one another except for mating or territorial disputes.

Climate change: Malleefowl are particularly vulnerable to the increasing frequency and severity of drought that has resulted from climate change. Breeding season monitoring in the 2002 drought revealed there was virtually no breeding in Victoria. Low breeding numbers were also recorded in the dry years of 2006 and 2007 (Benshemesh and  Stokie 2013).

Habitat loss: the main Malleefowl areas in Victoria are now located in areas of parks and reserves. Widespread clearing of suitable Malleefowl habitat has resulted in fragmentation of habitat making populations more susceptible to threatening processes. Reconnecting isolated areas of habitat and protecting remaining habitat are essential for the species long term survival.

Fire: wildfire fire frequency, intensity and seasonality can severly impact on Malleefowl. With many populations now surviving in isolated remnants large scale fires have the capacity to wipe out entire populations. Breeding rarely occurring in habitats that have been burnt within 15 years (Tarr 1965, Cowley et al. 1969). Breeding densities are highest in habitat which has not burnt for 40 or more years although a mosaic of long unburnt and recently burnt habitat is favourable.

Predation: the Red Fox is listed the major threat in the Victorian Flora and Fauna Guarantee Malleefowl Action Statement, Signs of fox activity are regularly recorded in field monitoring. Fox scats were collected at 517 mounds in the 2012 Malleefowl Recovery Group surveys (Benshemesh and  Stokie 2013). Feral cats are also recognised as a predator species (Benshemesh 2007).

Competition: grazing from rabbits can denude vegetation and deprive Malleefowl of food and shelter. Kangaroos can also be an issue in high populations densities.

A full account of threats is elaborated in the National Recovery Plan for Malleefowl. Department for Environment and Heritage, South Australia Benshemesh (2007).

In Victoria, 18 key parks and reserve areas have been identified as requiring some level of management which include some or all of the following key actions:

In Victoria, implementation of the above actions is undertaken by Parks Victoria, Department of Environment, Land, Water & Planning depending on land tenure and volunteer organisations such as the Malleefowl Recovery Group.

Annual monitoring of populations began in the late 1980s and over the years there has been increased government involvement and support, coupled with strong community and volunteer interest. This effort culminated in the 2008/09 season when the Victorian Malleefowl Recovery Group (VMRG) monitored 1,169 mounds at 37 sites using up-to-date data-capture methods and analyses (Benshemesh & Stokie 2009).

The Victorian Malleefowl Recovery Group is dedicated to the preservation of the Malleefowl, volunteers undergo training in bush craft, data collection techniquea and participate in collecting data from nest sites within defined grids in the Mallee area of Victoria. This group along with other groups is involved with revegetating areas adjacent to known Malleefowl habitat and connecting areas of habitat.

In 2016 the Victorian Malleefowl Recovery Group (VMRG) visited 1251 Malleefowl mounds (2016/17) breeding season. Breeding numbers were higher than the previous season but still lower on a site-by site basis than most previous years with 2012 being the most active breeding season in recent years. The increase from 2015 to 2016 may have been attributed to the slightly better than usual rainfall between May-August 2016. 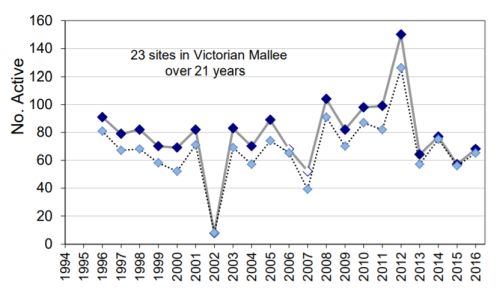 Trends in Malleefowl breeding numbers at 23 sites over the past 21 years (upper graph), and at 22 of these sites excluding v04 (lower graph). 1994, 2002, 2006 and 2007 were major drought years (white points). Data excludes mounds outside site boundaries. Source: Report to VMRG by Joe Benshemesh and Peter Stokie, March 2017 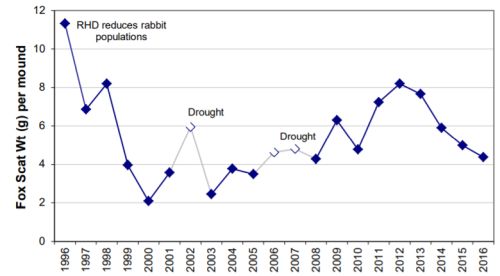 Trends in the average fox scat weight per mound at 20 sites over 21 years. No attempt has been made to control for biases due to variations in the proportion of active mounds (more likely to be marked with fox scats) or changes in the proportion of very old and inconspicuous mounds. Source: Report to VMRG by Joe Benshemesh and Peter Stokie, March 2017.

This project is being carried out by Drs Michael Bode, Cindy Hauser and Jose Lahoz‐Monfort at Melbourne University. They are developing a program that will make the best use of the ongoing flow of monitoring data to better manage Malleefowl.  The project aims to learn about the effect of predator control on Malleefowl at about 40 Adaptive Management sites across Australia. About half of these sites will be managed (treatment sites), the other half won’t (control sites).

In 2016/17 Light Detection and Ranging  (LiDAR) scan mapping was used by DELWP to identify and protect nesting mounds within the Little Desert National Park, the Nurcoung Flora Reserve and Mount Arapiles-Tooan State Park, including private land adjacent and in between these reserves and adjoining private land from prescribed burning activities by DELWP.  The project has assisted land managers to gain a better idea of the habitats inhabited by Malleefowl in this large landscape, and particularly the response of Malleefowl to different stages of habitat recovery after fire. Contact: Belinda Cant ,DELWP.

Icons of the Mallee - Parks Victoria - more about the Malleefowl, threats and ecloogy.