The adult male Regent Parrot has a general yellow appearance with the tail and outer edges of the wings being dark blue-black.  It has yellow shoulder patches and a narrow red band crosses the centre of the wings and yellow underwings.  Its back and inner wing coverts are dark olive-green. Adult females and juveniles are predominately a dull olive-green with more subdued markings than the male. 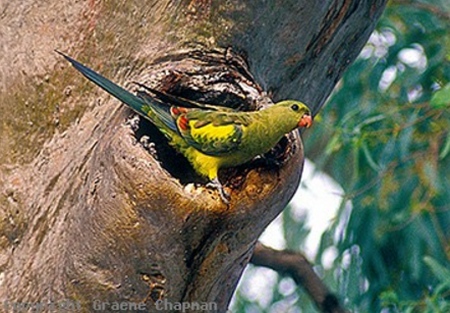 Within Victoria, the Regent Parrot is found along the Murray River and associated National Parks and conservation reserves. It is also found in the Wimmera River Drainage Basin from Lake Hindmarsh up into the Wyperfeld National Park.

The Regent Parrot (eastern subspecies)  occurs in south-eastern Australia (lower Murray-Darling basin region of SA, NSW & Vic). The population is estimated to be no more than 1,500 adult breeding pairs (Robertson & Hurley 2015, Garnett et.al. 2011). In the Wimmera River drainage basin the breeding population could be fewer than 350 breeding pairs which includes 235 nests in Wyperfield National Park (Garnett & Crowley 2000).  Numbers have declined at many locations since the 1990's (Garnett et.al. 2011).

The Regent Parrot is found in pairs or small flocks. Regent Parrots are seen in the Murray Sunset National Park at all times of the year. Non-breeding adults and immature birds rely on areas of mallee away from the Murray River floodplain throughout the year.

Eggs are laid approximately 14 days after the initial courtship display (Burbidge 1985; Webster 1991). The female incubates 3-6 eggs for a period of 21 days whilst the male feeds her in the nesting hollow by regurgitating food (Webster 1991). The young are fed by both parents or cooperatively fed by a group of adult birds (Beardsell 1985). 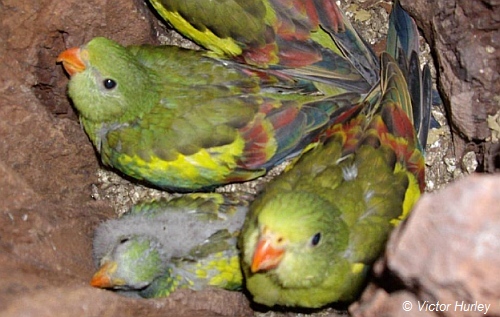 Brood of four Regent Parrots from a clutch of five eggs. (Photograph by V.G. Hurley, 2008)

When movements occur over open fallowed paddocks or cereal crops, Regent Parrots fly very low (1-2m high) and fast in a more or less direct line toward remnant vegetation. The vast majority of movements occur early in the morning with few movements occurring after 11.15 hrs (Sluiter 2007). It has also been observed that 80%  of the movement associated with nesting occurs between 7am and noon (Hurley 2009).

Studies have found Regent Parrots readily use almond groves as movement corridors. There has been a 10-fold increase in almond groves the Robinvale area between 2003 to 2013 to approx. > 20,000 ha (CSU 2013).

The Regent Parrot has been recorded eating the seeds, fruits or buds of over 40 plant species (Webster 1991). Foraging activities have predominately been observed in mallee, although food may also be obtained from vineyards, orchards, cereal crops and riparian woodlands (Burbidge 1985). They will also feed on spilt grain on roads (DEC 2005) and are known to forage in almond crops (CSU 2013), although the overall impact would be low considering the vastness of almond crops and the low numbers of Regent Parrots.

The most serious threats are;

Loss of habitat; clearing, grazing, harvesting and degradation of River Red Gum and mallee vegetation, especially within 20km of major rivers and along flight paths. Loss of habitat disrupts movement, may increase the risk of predation, limit access to suitable foraging habitat or reduce foraging efficiency to the point where nesting habitat becomes unsuitable or breeding success is affected.

Salinisation; rising groundwater impacts on the health of vegetation causing loss of breeding and foraging habitat.

Drought; lack of water flowing into Lake Albacutya is affecting the surrounding vegetation, in particular dieback in River Red gums which is an important feed and nesting tree of the parrot. In addition Regent Parrots require a permanent water supply for drinking water.

Competition for nest hollows; competition with honey bees can result in the abandonment of nest sites.

Road kill; birds may feed on spilt grain on roadsides and thus be at risk of being struck by vehicles.

Illegal bird trade, involving trapping, egg collecting and removal of chicks from nests by poachers. These activities may result in the destruction of nest hollows and can impact upon populations through the loss or death of individual birds.

Agricultural control; through shooting by orchardists or unintentional poisioning when baiting and trapping of vermin, eg. Oat baits for rabbits are not target specific and have resulted in substantial population losses.

Conservation of the Regent Parrot in Victoria

The recommended nest box plan is based on measurements taken from 35 known Regent Parrot nests in Victorian River Red Gums.  Nest boxes must be constructed from hardwood and preferably from River Red Gum logs.  The base of the nest chamber must be lined with 50 mm thick layer of activated charcoal covered with a further 50 mm thick layer of frass (termite dung and other detritus) from existing decaying River Red Gum logs on site.  The lid must be hinged to allow inspection and to be secured via a rare earth magnet and metal attachment plate.  The lid must be able to open to at least 90 degrees (Hurley 2014).

Poorly designed thin plywood nest boxes provide no thermal insulation at all and internal temperatures equal external temperatures at all times.  Parrots nesting in these boxes would need to cope with daily fluctuations in temperature of up to 25 ⁰C, whereas for those in natural cavities the maximum daily variation is 12⁰ C. This, not surprisingly, because the natural cavities are more thermally stable and likely to remain more attractive to Regent Parrots in the extremes of Victoria’s Mallee region (Robertson & Hurley 215). 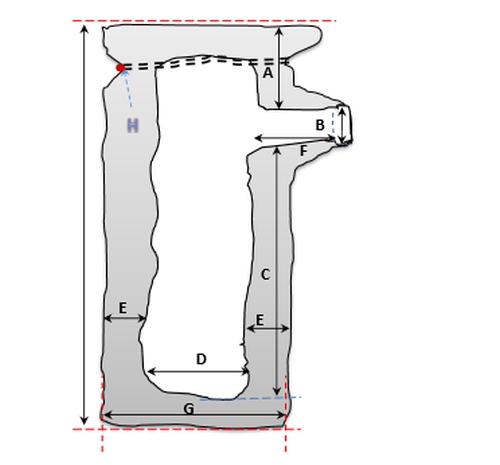 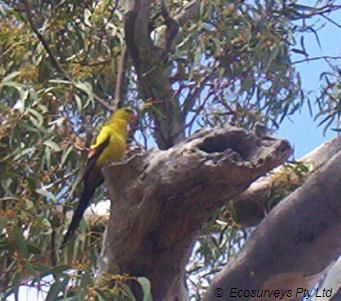 In 2009 a population monitoring protocol for monitoring breeding colonies at two locations along the Murray River was completed for the Mallee Catchment Management Authority (GHD 2009).

There have been numerous surveys conducted to measure breeding success e.g. Note these reports have not been linked here due to the sensitive nature of site locations.

Between 2009 - 2013 Charles Sturt University undertook research to (1) identify and examine the relationships between key habitat and food resources of Regent Parrots in landscapes, and (2) examine the foraging behaviour of birds in agricultural landscapes to determine the potential for species to provide ecosystem services (e.g. insectivores foraging in orchards for insect pests) or contribute to crop damage (e.g. parrots consuming fruit). Final Report pdf

Burbidge A. H. (1985) The Regent Parrot. A report on the breeding distribution and habitat requirements along the Murray River in south-eastern Australia. Australian National Parks and Wildlife Service, Report Series No. 4, Canberra, ACT.