Also known as the Tiger Quoll or Native Cat, the Spot-tailed Quoll is the largest marsupial carnivore on mainland Australia and occurs in Victoria, New South Wales, Queensland and Tasmania. Slightly larger than a domestic cat, the Spot-tailed Quoll is coloured light to dark golden brown to almost black with conspicuous white spots on its body and tail. Males are larger than females and have a head-body length between 380-760mm with a tail length of 370-555mm.

Close relatives of the Spot-tailed Quoll;

There are two recognised Subspecies of the Spot-tailed quoll;

Genetic studies have found there is little evidence that quolls from south-west Victoria are genetically distinct from quolls in eastern or central Victoria or from New South Wales populations. The results suggest that mainland populations of Dasyurus maculatus maculatus form one evolutionary significant unit and the Victorian populations form one management unit and that Quolls in North East Victoria have the highest genetic diversity (Belcher 2006). 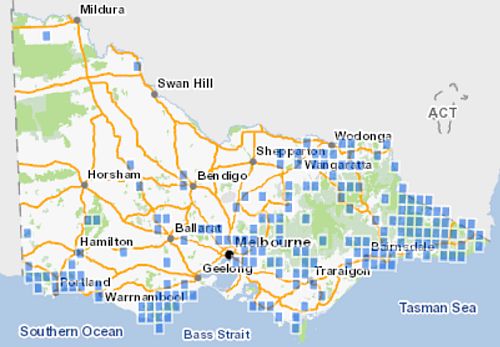 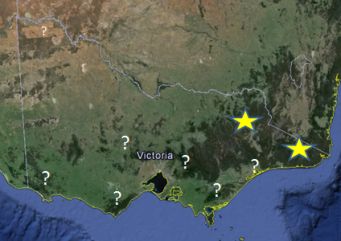 Many populations of Spot-tailed Quoll have experienced a significant decline over the past 20-30 years to the extent where there is a question over their long term viability. North East Victoria and East Gippsland are considered stronghold areas for this species.

In 1984 it was estimated that the Spot-tailed Quoll had suffered a 50% reduction in its known range since European settlement (Mansergh 1984). Since that date there has been a further decline in population and range with reduced sightings and low survey counts. The main stronghold areas for this species in Victoria are now in North East and East Gippsland.

In south-west Victoria there is grave concern for ongoing survival at Mt Eccles and the Otways. For example in 1999 there were only 3 records from 51 survey sites in the Otways (Belcher 2000). It is now considered that populations of Dasyurus maculatus in Southwest Victoria, including the Otway Ranges, Cobobbonee State Forest, Mt Eccles National Park and the Mt Eccles lava flow are critically endangered (Belcher 2006).

The Spot-tailed Quoll occupies a range of forest habitats, particularly wet eucalypt forests associated with rocky outcrops, extensive riparian vegetation and high levels of ground dwelling prey. They have a large home range in excess of 580ha but could be up to 2200 hectares, which is influenced by the quality of habitat and availability of den sites. Males can use one or more den sites, which can be made in hollow logs, hollow trees, rock crevices and caves. During a single night an individual may range over several kilometres. Movement of males is greater than females, particularly during the breeding season, which extends from April to July. Females may carry up to 6 young, which become independent after 18 weeks

Spot-tailed Quolls are mainly nocturnal feeders but have been observed in daylight hours. They are proficient climbers and opportunistic feeders, feeding on terrestrial and arboreal prey such as small mammals (eg. antechinus, bush rat), medium sized mammals (possums, gliders, and rabbits), birds and insects. Larger mammals such as wallabies have been analysed in scats indicating a scavenging and opportunistic feeding behaviour. Areas known as latrine sites serve as communal defecation sites and are often situated in exposed areas such as rock ledges. It is believed these areas may serve a role in communication of territory and possibly reproductive status (Edgar 1983, Watt 1993, Mansergh 1995, DSE 2005).

Competition; foxes and cats preying on potential quoll prey is a problem where forest habitats have extensive boundaries with rural landscapes, opening up areas of forest through construction of vehicular and foot tracks also exacerbates the problem by providing easy access to competitor species.

Illegal killing; trapping, shooting and poisoning by landowners, largely due to their predation on domestic poultry.

Too frequent burning; this can result in a loss of structurally complex habitats which are needed for foraging and denning opportunities.

Road kills; this problem is identified where busy roads pass through habitat or habitat linkages.

The issue of non-target poising

The remaining concern regards the indiscriminate use of baits in private land areas adjacent to forest habitats where local quoll population sizes are small or isolated and impacts from secondary poisoning particularly where feeding on poisoned rabbits could occur. (Belcher 1998, Belcher 2000).

The recovery of Spotted-tailed Quolls (and the eventual re-introduction of Eastern Quolls) in Victoria will require an effective landscape-scale fox control program in order to ensure success."

Fox control as conducted through programs as the Southern Ark and Glenelg Ark in Victoria is a highly targeted process that quolls will need if they are ever to recover.

Management actions for conservation of the Spot-tailed Quoll in Victoria

In 2016 the National Recovery Plan was released. This document paves the way for the formation of a National Recovery Team with scientists and land managers from New South Wales, Victoria, the ACT, Queensland and Tasmania collaborating in an effort to undertake conservation measures across this species range.

In Victoria, there have been a number of significant management actions within the last 20 years aimed at securing the viability of Spot-tailed Quoll populations. In areas where timber is harvested Forest Management Plans now have stipulated management actions specific to Spot-tailed Quoll such as creation of special protection zones (SPZ) where quolls are known to exist, in addition protection of den sites and habitat corridors are included in timber harvesting plans.

Predator control activities now take account of the need to ensure quolls are not inadvertently killed through baiting programs. The use of remote cameras has improved the efficiency of survey techniques and standards have been established for the use of this technology (DEPI 2010). Large predator programs such as Southern Ark and Glenelg Ark provide a long term effort at control predators.

In many parts of Victoria quoll habitat has been protected within new National and State parks, e.g. the Angahook – Otway Investigation (VEAC 2004) has resulted in an increase in sites where known records have been incorporated into permanent reserves in the Otways from 15% to 59% of sites now in permanent reserves. Creation of the Cobboboonee National Park in 2009 has provided long term protection of Spot-tailed Quoll habitat in this area.

Despite quoll habitat being protected in National and State Parks there is an ongoing decline in this species across much of its range in Victoria. The question is why is this happening? Are quolls adequately protected from predators and competition from the Red Fox and Feral Cats and are there enough quolls remaining in our parks and reserves to sustain a viable long term population?

It has been found that the population with the highest genetic diversity (North East Victoria) would be the most suitable source for obtaining quoll’s for translocation (Belcher 2006).

Areas in East Gippsland contain ideal quoll habitat and are regarded as a stronghold for this species in Victoria. In 2011/12 remote camera surveys were carried out across 60 sites in areas where fox control was carried out as part of the Southern Ark program.

Monitoring the abundance of Spot-tailed Quolls and predators is undertaken inside and outside predator control programs areas to determine the impacts and effectiveness of predator control efforts.

Broad-scale monitoring is carried out to determine the distribution and status of Spot-tailed Quolls in State Forest and Spot-tailed Quoll protection zones (SPZ's). Monitoring the impact of logging and efficacy of current conservation prescriptions to maintain habitat will assist in applying forest management prescriptions for habitat protection where quolls are found.

VicForests undertakes Pre-Harvest Biodiversity Surveys in all areas planned for harvest. The VicForests Pre-Harvest Surveys – Targeted Species Survey Procedure 2016 (pdf) includes information about survey methodologies to be used for target species, the minimum standards for field surveys, and requirements for recording of information and reporting of results. Specifically surveys for Spot-tailed Quoll;

DELWP is responsible for ensuring adequate training for personnel involved with wild dog and fox baiting programs to minimise the risks to Quolls.

Remote camera surveys were conducted over three years between 2010 - 2013 in areas that were planned for introduced predator control through the Gelantipy Community Baiting Program. There is on-going monitoring to assess effectiveness of predator control programs. The DELWP co-ordinates fox control as part of Southern Ark and Brush-tailed Rock-wallaby programs.

Mount Stradbroke - In 2011 trials to refine remote camera survey protocols were undertaken in the Upper Snowy River population. This project was part of research into "The Distribution and Status of the Spot-tailed Quoll in the Alpine and Snowy River National Parks. DEPI (Nelson, Belcher & Scroggie 2010).

Moondarra State Park - Parks Victoria was scheduled to conduct a survey in 2012/13 to determine the status and extent of the population. There is also recognition of the need to protect potential quoll habitat from fire management activities where possible.

Monitoring is conducted to collect data which will assist in understanding survival, reproduction and dispersal of quolls. Every three years broad-scale population monitoring is undertaken to determine population trends. Survey and monitoring protocols have been developed which allow quolls, foxes and cats to be monitored simultaneously using remote cameras.

Control of predators such as wild dogs and foxes is undertaken in this area.

Mount Lawson State Park - Parks Victoria in association with the Wooragee Landcare Group surveyed for Quolls in 2005 with no quolls found. Further surveys are required.

Strathbogie State Forest - remote cameras were used to survey 40 sq.km in 2009/10. This follows on from large scale hair tube surveys in 2005/2006 and surveys in 2006/07 which both yielded poor results. Further remote camera surveys are scheduled.

Warby Range State Park - a search for latrine sites is to be carried out but no dates set.

This project is calling on members across the community to report sightings of six key species (inc. Spot-tailed Quoll) within 2019-2020 fire-affected and neighbouring) areas. Bushfire Recovery Community Wildlife Reporting

Tiger Quolls are the largest extant marsupial predator on mainland Australia and considered to be in decline across their range. The Otways, once a stronghold for the species, was devoid of any confirmed Tiger Quoll observation for about a decade until the CEC’s Tiger Quoll Research Program unearthed two Tiger Quoll scats in 2012. Through analysis of extracted DNA, these samples were confirmed as Tiger Quoll positive. The CEC continues to pursue further evidence of the species and is concentrating its efforts on trialling novel detection techniques including the use of scat detection dogs. Once techniques prove to be reliable and effective, management decisions can be made with greater confidence and with the potential to preserve this iconic species.

The AQC has an DELWP approved 3 year project launched on June 16, 2018 in Melbourne. The project timeline has a strong possibility to extend thereafter as AQC survey aims to significantly contribute to the growing body of knowledge of wild Spotted-tailed quoll plausible populations at the Northern & Eastern Victoria Bioregions locations.

The current species confined home range along with their cryptic and nocturnal habits makes detection of quoll populations problematic, especially as the species now occur at low densities. Victorian members of the public are encouraged to report sightings directly to the Australian Quoll Conservancy.

To improve the ability of this survey, the AQC is using motion cameras with non invasive gender quoll detection methodology, these have been extremely successful in North Queensland identifying species gender as well as their current breeding status speeding up the process of determining established quoll colonies and/or roaming males in search of mates.

Other pages on the use of remote cameras