The Squirrel Glider Petaurus norfolcensis is a native marsupial gliding possum and one of four species in the Family Petauridae. It is considerably larger and less common than the well-known Sugar Glider, but very closely related. Adults are around 18 to 23 cm in length, with a slightly longer tail, and weigh between 190 and 300 grams. The fur is generally pearl grey, with black and cream patches at the base of the pink ears, and a white or light cream belly. The large, bushy tail is grey, darker near the tip.

The Squirrel Glider  is native to eastern mainland Australia where it is sparsely distributed through the dry sclerophyll forests and woodlands from the Grampians in the southwest, through the box-ironbark country of central and eastern Victoria, the inland slopes of southern New South Wales, and up the coast and hinterland as far north as Cairns and as far inland as Coonabarabran. It generally avoids closed forest and rainforest. 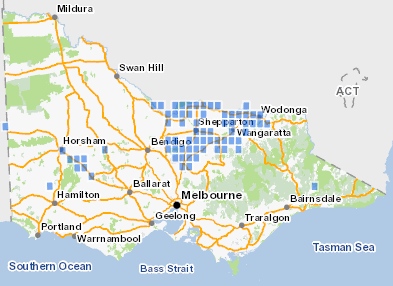 All known records of the Squirrel Glider in Victoria. Source: VBA 2016

In Victoria, the Squirrel Glider is mainly found in the Murray Valley Plains. Scattered populations are also found in western Victoria including the northern Grampians, Stawell and Deep Lead area, although the population status in these areas is unknown and requires survey, particularly in light of the prolonged drought conditions in the area.

A major break in the distribution occurs between Stawell and Colbinabbin, with only one locality record at Stuart Mill known from within this span of 185km (Menkhorst 1995).

Squirrel Gliders need a mix of eucalypts and acacias, and also favour banksias. At least one favoured tree species e.g. Yellow Gum, White Box, Long-leaved Box and Red or Mugga Ironbark must be in flower in winter and one or more of the eucalypts needs to be smooth-barked, both to provide a greater variety of insect food and because smooth-barked eucalypts tend to harbour more hollows.

Squirrel Gliders live in family groups of 2 to as many as 10 individuals, but typically comprising an adult male, one or more adult females, and their offspring of the season. Groups occupy a home range estimated at between 0.65 and 8.55ha, largely depending on habitat quality. They are nocturnal and require tree hollows to shelter in through the day, both to escape predators and to maintain body temperature during extremes of heat and cold. Like Sugar Gliders, Squirrel Gliders line hollows with eucalypt leaves, adding more leaves in colder weather, and huddle together for warmth.

The Squirrel Glider feeds on acacia and eucalypt sap, nectar, pollen, flowers, caterpillars, beetles and other insects, and the green seeds of the Golden Wattle. It forages at a variety of heights, from the crowns to shrubby understory. It is a sure-footed and agile climber with a maximum gliding distance of about 50 metres between trees.

Breeding can take place at any time of year but depends of food availability. Females can have two litters a year in good conditions, more commonly one. The young leave the nest at around 6 months but despite aggression from the dominant male may remain in the general area for about another year before finding a territory of their own. Mortality during the dispersion phase is high but once established, individuals can survive for up to six years. 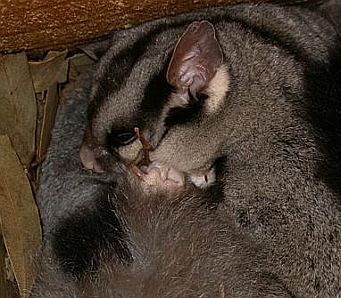 Squirrel Gliders in an artificial nest box placed as part of the Regent Honeyeater Project near Benalla, north-eastern Victoria. 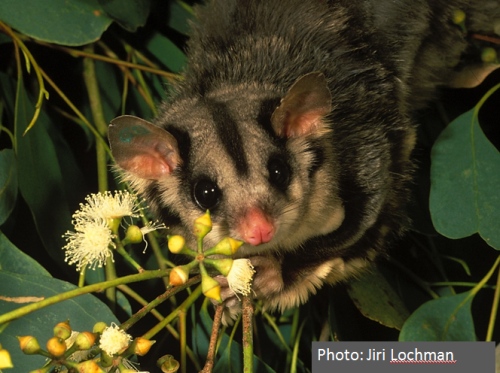 Conservation and management of Squirrel Gliders in Victoria

The North East Catchment Management Authority has undertaken the Threatened Grassy Woodlands Project in which base line data regarding Squirrel Gliders and their habitat was gathered. This project has been replaced by the Woodlands  & Wetlands project.

Arthur Rylah Institute to develop a survey technique that can be used by land managers with minimal training.

Councils to liaise with Arthur Rylah Institute and use definition of optimum habitat, or actual records, to formulate their overlays. 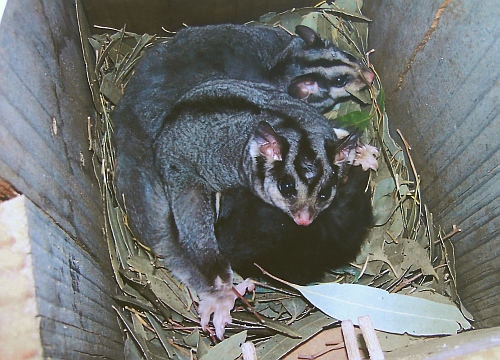 A breeding pair of squirrel gliders found in a box on a property near Echuca in 2016.

The Strathallan Family Landcare set-up the Campaspe Squirrel Gliders project in 2013. A report conducted by the Department of Sustainability and the Environment in 2009 found the presence of endangered Squirrel Gliders on a property along the Campaspe River at Strathallan. A report funded by the Shire of Campaspe in 2013 found further sightings along the river and in the grounds of the Golf Club at Rochester.

With financial assistance and support from the Shire of Campaspe, Bunnings Echuca, Rotary Club of Rochester, Mitre 10 Rochester and Echuca Painter Mark Haydon, the Landcare group began making and installing nesting boxes along the Campaspe River Reserve, from the outskirts of Echuca to Rochester. Over 100 boxes were made and installed using a GPS device to record the location of each box.

The project has moved onto a second stage with six boxes being installed on private property and along the Campaspe River Reserve at Echuca. The group has applied for funding under the Victorian Government’s Threatened Species Initiative and if successful will join with Echuca/Moama Landcare group to take the project along the river, through the town to the mouth of the Campaspe at the Murray River.

The group has also applied for funds from the Shire of Campaspe for a specially designed nest box camera which will enable the group to conduct and record annual mammal survey information of the boxes.   The long term aim is to share this information within the Victorian Biodiversity Atlas.

The Regent Honeyeater Habitat Restoration Project is a landscape scale community effort to protect and restore all significant remnants of Box/Ironbark and Box/Gum Grassy Woodland habitat in the agricultural district of the Lurg Hills, near Benalla, Victoria. This project has engaged a whole farming community in restoring remnant box-ironbark habitat for the endangered species still living in the district, and attracted ongoing support from a wide cross section of the community to help farmers with the on-ground works.

The nest box program has been in operation for nearly 20 years. There are 400 boxes already in place, with Squirrel Gliders and Sugar Gliders nesting in about two thirds of them.

Reason for the nest box project

The basic problem facing possums and gliders is an extreme shortage of natural tree hollows, because the old trees were heavily cleared decades ago, and the regrowth forests are still far too young to have any hollows.

Regular checking helps to discover the preferred habitats in different seasons, the breeding success of particular colonies, barriers to wildlife movement across the landscape, and strategic new areas to place more boxes.

The box locations are accurately mapped on 1:25,000 contour maps and are also recorded by GPS.

Monitoring helps to detect unwanted species (eg starlings, feral bees or rats) taking over our boxes, so that we can remove them at a later date.

Nest box monitoring - data from the nest boxes indicate that 70-80 % of boxes have been used by gliders at some stage, and the animals are observed in around 30% of boxes on any one spot-check.

Benefits of the project

Results from several years of monitoring have given conclusive evidence that gliders need the fertile soils along creeks to breed successfully. The project records also show that gliders move out of the dry hills down to the creeks every summer, and they absolutely need continuous corridors to do this safely.

Any major breaks in the tree cover along roadsides or creeks become serious barriers to glider populations. Isolated 'islands' of habitat have proven empty, because gliders are taken by predators and there are no possibilities for replacement! Solid information like this makes it possible to know what needs doing and also the most strategic sites to make the most difference. 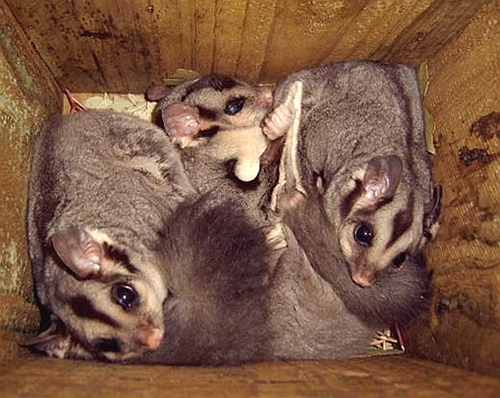 A family of Squirrel Gliders rest safely for the day in one of the nest boxes which are a virtual "motel chain" of safe havens all across the district. Image: Ray Thomas.

This project also monitors 30 extra boxes that were specifically designed for Common Ring-tail and Brush-tail Possums. These boxes are all located in heavy mistletoe infestations to re-establish populations of these hungry possums as a natural biological control for mistletoe.

Research to inform management and restoration works for squirrel gliders

In 2004/05 a group of researchers from Monash University, Melbourne University and VicRoads started to look at the impacts of the Hume Highway on Squirrel Glider connectivity and possible management measures.  Methods to assist movement across the highway included the use of canopy bridges and glider poles as well as measuring the role of vegetation in centre median strips.

A before after controlled impact experiment was carried out in 2005 to 2007 on different crossing sites as well as a control site away from the highway with a 10 m gap between either side of the road. In 2007 five crossing structures were installed along the Hume, these were monitored between 2008 to 2012. More details.