Other species of skinks that were previously in the genus Egernia and on Victoria’s threatened species list (DSE 2003).

The Swamp Skink grows to a maximum of 250mm in length, the dorsal colour varies between shades of greenish-brown, olive-brown or yellow-brown above. Many or all of the dorsal scales have a black anterior margin and some with black lateral edges which combine to form a conspicuous black stripe along each side of the back. Another black stripe is present from above the ear to the base of the tail, widening on the body to become a broad black upper lateral zone enclosing some paler scales. The head and limbs are usually flecked and streaked with blackish markings. The limbs often contain scattered pale spots, the throat and lower flanks often flushed with olive-green (Cogger 2000).

The Swamp Skink is mainly found within the southern half of Victoria with the population at the Grampians being the most northern.

To the east of Melbourne the Swamp Skink is found within the Highlands Southern Fall bioregion in the Bunyip State Park and from Mt Dandenong to Hoddles Creek and Yarra Ranges National Park. 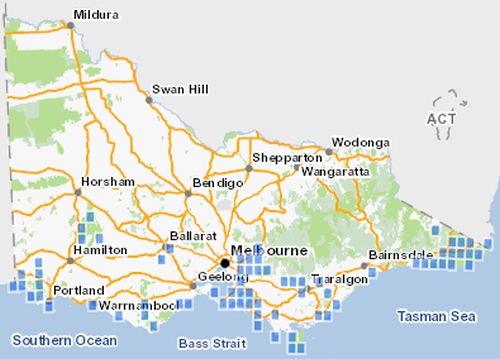 All known records of Swamp Skink in Victoria. Source: VBA 2016.

The Swamp Skink is often restricted to densely vegetated swamps and associated watercourses, and adjacent wet heaths (Melaleuca or Leptospermum thickets), sedgelands and saltmarshes (Clemann 2000, SAC 2000, Manning 2002). It can occur in association with freshwater and saltmarsh environments.

The Swamp Skink is a diurnal heliotherm that basks upon fallen timber, driftwood, sedges, and tussocks and is generally active between early-September to early-May. It is a secretive species that quickly retreats into shelter when disturbed, usually dense vegetation or burrows of its own construction, although it uses the burrows of freshwater crayfish, as well as rocks, logs, tussocks and sedges (Clemann et al 2004). The Swamp Skink is aggressively territorial and will chase other Swamp Skinks away from its territory (Clemann 2001a). It has a home range of about 10 metres from its burrow, and juveniles disperse up to 200 metres (Robertson 1980).

Mating occurs just prior to ovulation in October. Being viviparous (produces live young), the Swamp Skink normally has between one and six young (mostly three) in late January or early February (Clemann et al 2004).

In its final recommendation the Scientific Advisory Committee (SAC 2000) has determined that the Swamp Skink is:

Within Victoria, the Swamp Skink is known from only 72 sites. At five or six of these sites it is now presumed extinct; at 38 sites the area of suitable habitat is now so small that these populations are not likely to be viable in long term.; and at a further 22 sites its current status is uncertain. It is only considered secure at 12 sites and only at four sites outside East Gippsland, Discovery Bay Coastal Park being one of the secure sites in the South West (SAC 2000).

A significant threat is the lack of on-going monitoring of know populations.

The major conservation objective for Swamp Skink is to ensure that the species survives and flourishes and maintains it potential for evolutionary development in the wild. This may be achieved by;

A document which aims to provide guidelines for the protection and management of the habitat of the Swamp Skink on the Mornington Peninsula was written by Peter Robertson and Nick Clemann 2015.

Guidelines for management activities in Swamp Skink habitat on the Mornington Peninsula.pdf

Clemann N. (2001a) The Swamp Skink Egernia coventryi: A review of the biology and status,  Monitor: Journal of the Victorian Herpetological Society, 11 (1), 13-15.