The White Sunray Leucochrysum albicans subsp.albicans var. tricolor is an erect perennial plant with greyish-green, narrow linear leaves growing to about 300mm high. In spring and summer it has long-stemmed, bright yellow flowers 25 to 40mm in diameter. Depending on the severity of summer conditions the plant can dry out after flowering.

The White Sunray occurs on black volcanic soils across the Victorian Volcanic Plains bioregion. It is also known from the Midlands region of Tasmania, and in the Southern Highlands region of New South Wales and the Australian Capital Territory.

The White Sunray has suffered extensive loss due to cultivation and pasture improvement. Many populations of White Sunray are now confined to roadsides where they are found in remnant patches of native grasslands. High levels of grassy or weedy biomass is detrimental to the reproductive success of this species as it is dependent on continual exposure of bare ground for successful seed germination.

Apart from Rokewood Cemetery all larger Victorian known populations are on roadsides. Victoria has about 20 populations containing <40,000 plants in total.

In recent years some populations have suffered a significant decline, possibly attributed to high biomass which reduces the quality of habitat. For example, a key population on the Glenelg Highway near Streatham has declined over an 8 year period, it went from approximately 4780 plants in 2003 down to 560 plants in 2011.

Continued survival of this species requires careful management of road reserves where this species is known to exist. 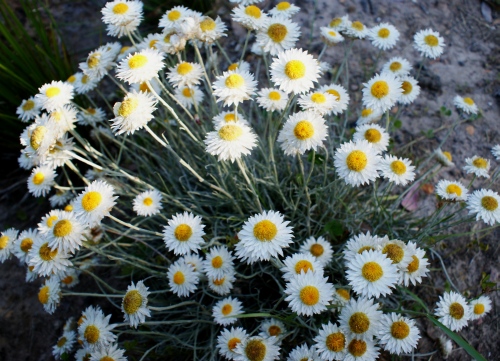 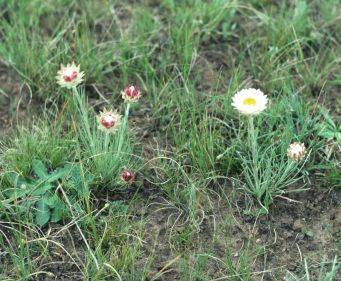 Conservation of the White Sunray in Victoria

At present 16 sites are monitored to gauge the impact of threats, determine the health of the populations and recommend management actions. Most monitoring is carried out by biodiversity officers from the Department of Environment, Land, Water and Planning, sometimes with assistance from community conservation groups.

In January 2011 a population monitoring survey of White Sunray was conducted by DELWP Biodiversity Officers at managed locations across the Glenelg Hopkins Catchment Management Authority region.

In the summer of 2011 a new population of the White Sunray was discovered along the Hamilton Highway, east of Mortlake.  Approximately 140 plants were counted. The population was mapped and VicRoads advised to ensure on-going protection of this population.

Surveys in 2012 found the incursion of highly competitive environmental weeds is posing a significant threat to the White Sunray at many sites.

In 2012 a survey of the Mortlake-Ararat Road population showed significant encroachment of woody weeds including Radiata Pine Pinus radiata. Dense infestations of pine seedlings significantly alter the structure, composition and integrity of this grassland by promoting exotic pasture grass species such as Phalaris and Fog-grass. These treatable infestations will be nominated as a priority for weed control in coming years.

Efforts to increase the number of White Sunray populations on the Volcanic Plains has been undertaken by the Trust for Nature in a two year project funded through its Land Management Innovation Fund. The Trust has been working with a number of TFN covenant landholders who have been willing to support reintroduction of White Sunray to their properties.

In 2012, 600 White Sunray plants were planted during autumn / winter across 6 grassland properties (some with multiple sites) in the VVP region of Corangamite. Almost all of these plants grew well and survived to flower and dropped seed in spring 2012. In order to increase the likelihood of establishing viable self sustaining populations another 360 plants were planted in 2013 into the areas that had grown the best. In the autumn of 2013 three new landholders with recent Trust for Nature covenants were also added to the project to increase the chances of success.

Greening Australia, through their Grassy Groundcover Restoration Project have undertaken a number of successful direct seedings using White  Sunray across the Basalt Plains with most resulting in expanding populations. 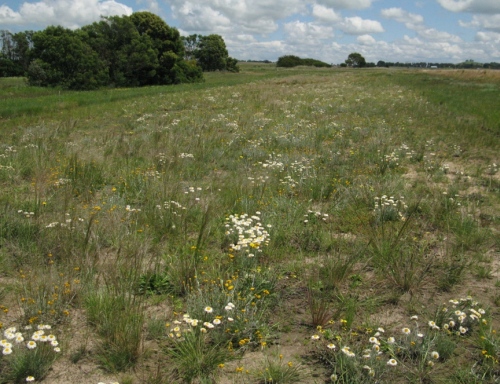 In 2013/14 Greening Australia with the support of VicRoads undertook restoration of two roadside plots on the Hamilton Highway at Duverney (about 5km west of Cressy). The project involved restoration of about 2.5 hectares of Plains Grassland with the specific aim to expand the range of the White Sunray.  Two plots were scraped to a depth of approximately 100mm and a number of non-indigenous trees were removed. The sites were reseeded with native grasses and forbs. Monitoring in November 2014 found a good diversity of native species with 11 species at one site and 15 species at the second site, in both cases exceeding that of the immediate surrounding remnant grassland vegetation.  Surveys also estimated the establishment of in excess of 1000 White Sunray pants per site (White 2014). 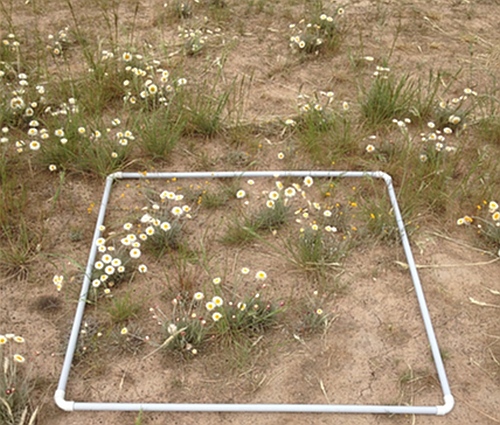 The DELWP, VicRoads and CFA Vegetation Management Officers have worked towards the implementation of fire management, maintenance of signage and other threat abatement works.

One of the largest populations of the White Sunray in the Glenelg Hopkins catchment had an environmental burn to managing grass biomass including the invasive Toowoomba Canary Grass ''Phalaris aquatica''. This population stretches along approximately 4.5km of Willaura-Wickliffe Road and contains approx. 1,500 plants (spring 2011 count).

The Willaura-Wickliffe Road grasslands were visited by a number of local land managers and stakeholders as part of a tour run by the CFA in December 2011. The tour promoted the ecological benefits of roadside burning programs. This provided the opportunity to highlight the high conservation significance of the site and discuss management issues with the CFA Vegetation Management Officers. 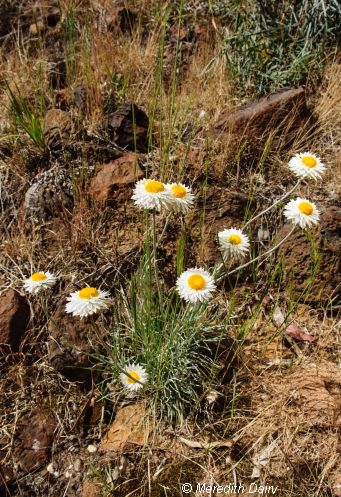