The Woodland Blind Snake (Ramphotyphlops proximus) is a predominately nocturnal, burrowing snake which spends most of its life under deep leaf litter or underground. It is one of about 30 species of blind or worm snakes found in Australia. It is non venomous, has microscopic teeth and considered harmless to humans. It is seldom observed with sightings usually being made after heavy rainfall or on warm damp nights.

The Woodland Blind Snake is found in eastern Australia and extends from northern Queensland; through the most of New South Wales into northern Victoria and eastern South Australia.

The Woodland Blind Snake has an average length of about 50 cm but can be up to 75 cm (Gow 1989). It has a dark brown, shiny appearance with no discernible head and extremely small eyes which are covered by a scale. The snout is bluntly tri-lobed from above and angular in profile, but not hooked. The nasal cleft is visible from above; extending to the first labial. There are 20 mid body scales around the body (Kinghorn 1929; Gow 1989). Wilson & Knowles (1988) states the identification of Blind Snakes is difficult in the field and microscopic examination is required. 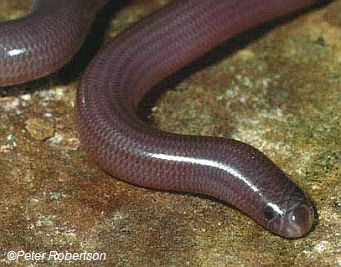 In Victoria, the Woodland Blind Snake is only found north of the Great Dividing Range with concentrations in the Goldfields and Riverina bioregions. Box – Ironbark forest areas around Dunolly, Inglewood and Bendigo are important but have unfortunately become fragmented which restricts populations to isolated areas.

Records in the Stawell and Grampians area date back to the late 1960’s early 70’s which could mean they are no longer present in this part of the state.

The Woodland Blind Snake is mainly confined to intact forested areas which have not been subject to cultivation. Typical habitat includes a good cover of leaf litter, old large trees and fallen logs. In Victoria they have been found in Black Box, Grey Box and Red Gum woodlands and also within areas of intact roadside and streamside vegetation (Driscoll 2004; Brown et al. 2008).

The Woodland Blind Snake shelters within the leaf litter, burrowing in the earth into ant and termite nest corridors and chambers, or using rocks and debris for refuge (Stothers et al. 1999). It feeds entirely on termites and the eggs, larvae and pupae of ants (Wilson & Knowles 1988) as well as small insects (Kinghorn 1929). According to (Wilson and Swan 2003) in the IUCN Red List assessment, the Woodland Blind Snake feeds solely on the eggs, larvae and pupae of Bulldog Ants, Myrmecia spp.

The Woodland Blind Snake lays a number of eggs in the soil, with reports varying from as many as 13 to 35 eggs.

Habitat loss; the Woodland Blind Snake has been subject to significant threats from habitat loss due to clearing, loss of ground layer woody debris and cultivation across its range. In Victoria. the Woodland Blind Snake population has in effect been broken up into isolated areas of remnant forest caused through land clearing. Blind Snake habitat in areas of remnant vegetation on private land may be impacted upon by grazing through creation of sparse ground cover. In the Goldfields bioregion many areas of Box-Ironbark forest have now been reserved into the Parks system but the threats associated with surviving in isolated remnants still remains.

In the Riverina bioregion intact roadside remnants have been identified as important remnant habitat for the Woodland Blind Snake because so much of the areas original native vegetation has been removed. Brown et al. (1998) suggest there has been a region-wide decline in the status of reptiles in the Victorian Riverina.

Predation; foxes and feral cats could prey on the Woodland Blind Snake when it is on or near ground level, particularly at night but the level of predation in is unknown.

Lack of knowledge; there is a limited understanding of this species population status and ecology. The Victorian Biodiversity Atlas (VBA 2016) records a total of 144 sightings to May 2016 but between April 2005 and May 2016 only 5 new records. This low number of records for Victoria could be attributed to the cryptic nature of the Woodland Blind Snake or a low and declining population, The IUCN assessment recommends further research to ensure that this species does not trigger a higher threat category (Maryan 2009).  “Regrettably the Woodland Blind Snake has not been the focus of much, if any, dedicated research” (Brown per’s comm. 2008). Significantly more in depth research is essential to establish and document a habitat inventory and related management processes.

Conservation of the Woodland Blind Snake in Victoria

Community awareness; raise the profile of this species and support for conservation of the Woodland Blind Snake on both private and public land. (Land for Wildlife, conservation covenants, field naturalists groups and community friends groups).