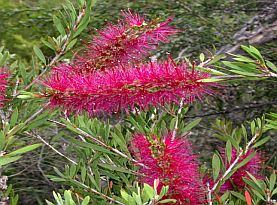 This SWIFFT seminar was conducted online with 146 participants via Microsoft Teams and streamed live via YouTube.  SWIFFT wishes to acknowledge support from the Department of Environment, Land, Water and Planning, Victoria in organising the seminar and thank speakers from the Royal Botanic Gardens Victoria for their time and delivery of presentations. Also, thanks to Michelle Butler who chaired the session from Ballarat and acknowledged Traditional owners, Elder’s past and present on the lands covered by the meeting. 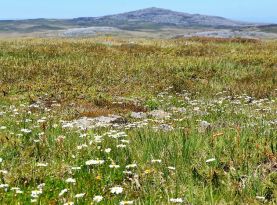 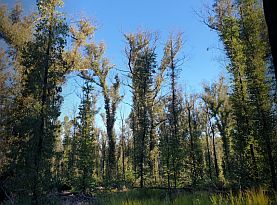 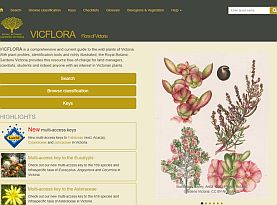 VicFlora: gateway to the State’s flora 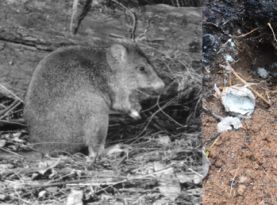 Speaker summaries are adapted from presentations and are not intended to be a definitive record of presentations made and issues discussed.

The Victorian Conservation Seedbank has played a significant role in conserving high priority threatened flora of Victoria impacted by the 2019/20 bushfires.

The Victorian Conservation Seedbank was established in 2005 and is managed through the Royal Botanic Gardens (RBG). The main activities involve assessing, collecting and banking seed from Victorian flora for long term storage.

The seed bank currently contains about 50% of Victoria’s rare and threatened flora. Material in the Seedbank is used to generate knowledge about plant requirements and as a source material for reintroduction programs for threatened plant species, and a safeguard for species at risk. The target species are rare, threatened or vulnerable species endemic to Victoria.

Meg spoke about the seed collection process which is carried out under established guidelines, including permits to ensure the highest standards of seeds are collected. Meg pointed out that field collections of seeds aim to maximise the genetic sampling of target populations to capture the genetic diversity.

On-site inspections are carried out to define the target location (including GPS), habitat, associated species, abundance and ecology. For bushfire affected areas, species threatened status and the percentage of habitat burned is assessed and mapped to determine if a species occurs outside of the fire scar, or if their only known locality has been burnt.

Meg emphasised that timing is critical to successful seed collection, particularly as there can be significant variations in the availability of high-quality seed. Where possible, vegetative material like cuttings are collected, either instead of or along with seed to allow for onward propagation.

As an example of the difficulties which can be encountered Meg spoke about the Snowy River Westringia Westringia cremnophila, an endangered species which had only about 60 individuals (or 12%) of the population of 500 plants remaining after the 2019/20 bushfires. This species is not adapted to fire and could easily face total extinction from bushfire. The collection was undertaken in incredibly steep gorge country and material from only 5 plants could be reached. The RBG Cranbourne nursery have since been able to successfully produced tube stock from the field collection.

Meg explained the process of assessing and preparing the collected seed for storage.

The aim is to prepare 4000 seeds per species, with 2000 retained at the seedbank, and 2000 sent to the Millennium Seedbank under the care of the Royal Botanic Gardens Kew, in the UK but this is not always possible due to some of the plant populations being very small.

A germination test of cleaned seed is conducted under controlled conditions using a standard protocol.

Seedlings for research and conservation

Meg spoke about additional work that flows on from the seed collections, this includes the germination of seeds for taking images and pressings which are used by Flora of Victoria online and in Herbarium collections to help with species identification.

Seedlings of rare species from germination tests are also grown on for inclusion in ex situ living collections at Melbourne or Cranbourne Gardens, for further future seed collection from cultivated plants, for research and for community engagement.

Use of new technologies in seed curation

X-raying seed is now a standard part of seed curation. It is a non-destructive method of assessing seed quality and avoids wasting seed which previously had to be cut to determine seed viability.

A Scanning Electron Microscope (SEM) is used as an analytical tool for taxonomic studies, and research. The high magnification SEM images of seeds are being uploaded and will be available as part of the Flora of Victoria online.

Meg spoke about a number of examples of how the seedbank has been used, to produce seedlings for on-ground conservation recovery projects and to return species back into the environment e.g.

The Victorian Conservation Seedbank supports salvage and recovery, with an emphasis on critical target species due to events such as the 2019 -20 south eastern bushfires. There are partnerships with practitioners on the ground to assess in situ populations, engage with community groups, work with RBGV colleagues on projects such as Raising Rarity and Care for the Rare, and continue to curate and bank threatened Victorian species as well as to better characterise the germination requirements of recalcitrant and difficult to germinate species, ultimately allowing for more effective germination and propagation of the banked taxa.

Meg thanked the team at the Victorian Conservation Seedbank and Community Groups and who have been involved in the conservation of threatened flora.

Tara provided an introduction to Conservation Genetics which has been recognised in many conservation Acts and Strategies, for example:

After the major 2019/20 bushfires in eastern Victoria there has been a particular emphasis on genetic risk to species.

Conservation genetics encompasses the use of genetic theory and techniques to reduce the risk of extinction in threatened species. Its longer-term goal is to preserve species as dynamic entities capable of coping with environmental change.

View the animation from Tara’s presentation.

Environmental impacts from fire and insects kill of the more susceptible genotypes (blue) as they are not adapted to these threats. Previously collected seeds can be used to restore the genetic diversity back to the sites where they were lost, provided all the genotypes were collected.

For species which are rare, the genetic diversity may low and not evenly spread across the landscape. There may be a common genotype in populations which are well connected but isolated populations may have limited genotypes present. This means there is reduced capacity to restore the population to its former diversity, exposing the population to a high level of decline or loss.

Laura spoke about applying Conservation Genetics to flora impacted by the 2019/20 bushfires in eastern Victoria. The project commenced in 2021 and is being funded through the Bushfire Biodiversity Response and Recovery Program (BBRR).

Investigate population genetic diversity of rare or threatened species in Victoria affected by recent bushfires or are at risk by bushfire:

The project commenced with a shortlist of 38 target species for conservation genetic studies based on their status under the FFG Act 1988, EPBC Act 1999 and whether the species is listed as a priority for action post fire and the percentage of habitat burnt. In real terms the project aims to deliver outputs for 20-25 of the target species with 2 species per genus.

Laura spoke about some of the target species which includes 5 Acacia species.

Laura explained the processes involved in the project which includes identifying sampling sites, field collections taking leaf samples and recording sampling data with the precise location for each sample taken.

Laura pointed out that samples are collected across a large area, in often difficult terrain. Some of the collections must be made from seedlings which can be difficult to locate. For many herbaceous species the field work must be timed to coincide with the flowering season to help find and accurately identify the plants.

Laura spoke about one of the recent achievements being the collection of 50 samples of Eucalyptus mackintii, despite species identification challenges between different juvenile and adult leaf forms at different locations. Also, there were difficulties finding fruit and identifying bark in burnt locations.

Laura asked that anyone with local knowledge regarding species on the target list which are recovering from fire to contact her.

VicFlora: gateway to the State’s flora

Vicflora is a free online Flora resource covering all native and naturalised vascular plants in Victoria. The site contains over 4,400 species. It supersedes the printed volumes of ‘A Census of the Vascular Plants of Victoria’ and ‘Flora of Victoria’.

Features of the Vicflora site

Andre spoke about a number of new features that will be included to upgrade species pages and the inclusion of more images. Maps will be upgraded to be fully interactive.

A major new addition will be Mosses of Victoria which will have similar features to the vascular plants in VicFlora.

Naveed introduced his presentation by talking about his previous research in Mycology in northern America, particularly his PhD on the ectomycorrhizal mushrooms Genus Gyroporus. In Australia, Naveed has undertaken post-doctoral work on truffle like fungi (not the true truffles, Ascomycetes which are eaten by humans) but Basidiomycetes (false truffles, which are underground spore sacks) many of them can be aromatic to attract mammals to disperse the spores. Basidiomycetes occur worldwide but are especially diverse and abundant in Australia.

Naveed focused on one Order of truffles, Hysterangiales, which are ecologically important in Australia, they are found throughout different times of the year and are eaten by wildlife.

Ecologically, Hysterangiales is a very important Order in Australia. Many of the genera in this order are prolific post fire fruiters and support a number of native mammals as well as being mycorrhizal symbionts in eucalypt forests post fire.

Naveed spent a considerable amount of time in selecting study sites in East Gippsland which focused on the Lowland Forest type vegetation.

Naveed referred to previous long-term monitoring of the Long-footed Potoroo in and around the study area. He also referred to major studies by Andrew Claridge in the 1990’s to early 2000’s which looked at truffle like fungi at a landscape scale. Some of the sites were included in the recent study. Naveed thanked Dr Claridge for his support.

Two categories of burn were used based on the DELWP bushfire severity classifications (High burn – more than 80% of canopy scorches and Low burn – less than 20% canopy scorch). Naveed noted that the combined impacts from prescribed burns, logging and bushfires have created an extensive, complicated patchwork of disturbance across East Gippsland. Study sites were focused on the least disturbed areas.

Field collections also include fruiting epigeous (above the soil surface) mushrooms and underground truffle like fungi. Naveed noted that to-date he has observed higher fungal species diversity at the low scorch sites compared with the high scorch sites one year after the fires.

The Long-footed Potoroo is a Mycophagous mammal, its diet being over 90% fungi, almost all of which are truffles and at certain times of the year up to 40% of its diet consist of Mesophellia.

Naveed acknowledged the DELWP staff who have helped out in the study, in particular Willow Bourke, Tony Mitchell and Mark Perry. Also, Dr Andrew Claridge,  Royal Botanic Gardens Victoria, volunteers from the University of Melbourne and other organisations involved.

More about fungi:  Talk by Alison Pouliot - Fun times with the Fungi Expert Recording of the 4th Wimmera Biodiversity Seminar on Thursday  24 September 2020