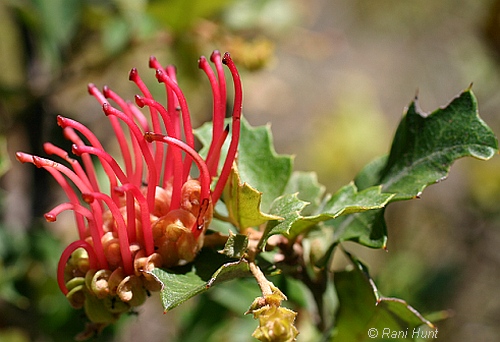 The high number of threatened grevillea species is a reflection of changes which have occurred across the Victorian landscape. Many of the threatened grevilleas are confined to very site specific and isolated patches of remnant suitable habitat which is often reflected in their common name. Threatened grevilleas need close monitoring to ensure they are not put at further risk from soil disturbance, weed invasion, excessive burning and general habitat decline.

This project is part of the Grampians Bushfire Management Strategy 2020.

One of the long-term objectives: Persistence of rare, threatened and endemic species.

1. Assess the floral characters, floral visitors and the impact that vertebrate and invertebrate visitors had on seed production in the species.

2. Use controlled pollination approaches to document the potential and realised breeding system, as well as undertaking an analysis of genetic diversity and structure among selected populations.

The Enfield Grevillea was visited by birds, mammals and numerous insects but their contributions were not equal. The species was shown to be preferentially outcrossing and there was no evidence of pollination limitation. Populations of the species were genetically diverse and differentiation among some but not all populations was found.

The research was conducted primarily by two honours students (Mr A. Aristidou and Mr S. Wawrzyczek) with some additional sampling and analysis post-honours under the supervision of Dr Susan Hoebee, La Trobe University.

Anglesea Grevillea occurs in open areas of dry sclerophyll forest or woodland with sandy or gravelly soils in the hilly country around Anglesea and Airey’s Inlet. Flowering occurs from October to December.

Current management actions for Anglesea Grevillea are co-ordinated through the Department of Environment, Land, Water & Planning (DELWP) Victoria in conjunction with Parks Victoria and local conservation groups such as Friends of Eastern Otways and ANGAIR.