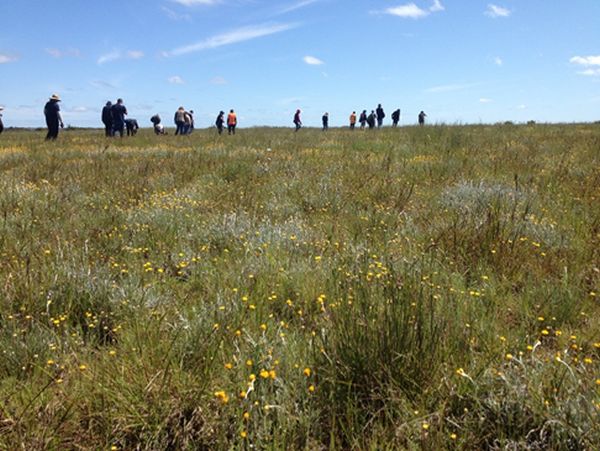 The Natural Temperate Grasslands of the Victorian Volcanic Plain (VVP) are listed as Critically Endangered under the Environment Protection and Biodiversity Conservation Act 1999 (EPBC Act). The VVP is one of only 15 Biodiversity Hotspots in Australia, and the only one in Victoria, it supports more than 25 nationally threatened flora and fauna species. The VVP also occurs in one of the most intensively cleared agricultural regions of Australia.

Today less than 1% of the previous extant of grasslands remain on the VVP, with crown land sites largely limited to small, isolated pockets on roadsides and rail reserves. The linear formation of these reserves makes them more susceptible to threats of weed invasion and creates challenges for management. Weeds directly and severely impact on native grasslands by competing for resources and pollinators.  Other threats include on-going vegetation clearing, agricultural intensification, habitat fragmentation, inappropriate fire regimes, impacts from rabbits, and inappropriate grazing regimes.

The Linear Reserves Project, lead by the Department of Environment, Land, Water and Planning (DELWP)  in partnership with the Glenelg Hopkins and Corangamite CMAs, commenced in 2014 as part of the Commonwealth Government’s National Landcare Program. This partnership with the Commonwealth Government will continue with the National Landcare Program #2 (2018-2023).  Further funding has also been secured through State Government’s Biodiversity Response Plan (BRP) and Biodiversity On-Ground Action (BOGA) grants, which are aimed at helping achieve some of the key goals in Biodiversity2037.

The project aims to reduce critical threats to, and enhance the condition, connectivity, and resilience of, native grasslands and associated species on linear reserves (i.e. roadside and rail reserves) and grasslands reserves through the implementation of strategic threat reduction activities.

Weed control is carried out by experienced spraying contractors on high conservation value roadsides and reserves. Weed species which threaten the functioning of the grassland vegetation community are targeted, these include pasture grasses and significant invasive species such as Serrated Tussock, Chilean Needle Grass and South African Weed Orchid.

Reduction of biomass through ecological burning is another method of management, and can contribute higher biodiversity outcomes compared to selective herbicide spraying. This project uses the two methods in conjunction to effectively control biomass and increase condition and diversity of grasslands. Where possible weed spraying activities are coordinated to occur on recently burnt sites.

The project is a partnership between DELWP, the Glenelg Hopkins CMA and Corangamite CMA. A wide range of land managers and stakeholders have been involved such as - CFA, Local Government, VicRoads, Rail Authorities (VicTrack, ARTC), Parks Victoria, Traditional Owners, Contractors, Federation University and the Arthur Rylah Institute.

This forum focuses on the importance of planned roadside burning for community safety and native grasslands.