This video conference was supported through resources and technology provided by the Department of Environment, Land, Water and Planning, Victoria. SWIFFT wishes to thank speakers for their time and delivery of presentations. Thanks to Michelle Butler who chaired the session from Ballarat.

The second video conference for 2018 had a theme: Bird conservation.

Hannah spoke about the need to quantify the status of woodland birds across Australia and address concerns about the general decline of woodland birds through nomination and Listing of Woodland Birds under the Environment Protection and Biodiversity Conservation Act 1999 (EPBC Act).

How do we protect woodland birds?

National protection level is important because some species migrate across large areas and use habitat in a variety of States. It also helps to provide a consistent approach to those species defined as Woodland Birds and afford the same protection measures across Australia. 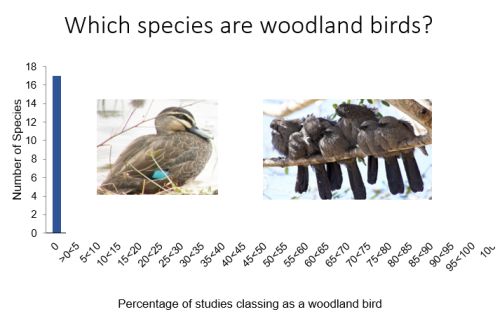 Hanna spoke about the process of determining the Woodland Bird Community through collaboration with leading bird ecologists, including workshops and surveys to refine lists of woodland birds and come up with an agreed consensus of what species would be included, the condition of the woodland bird community and threat levels. 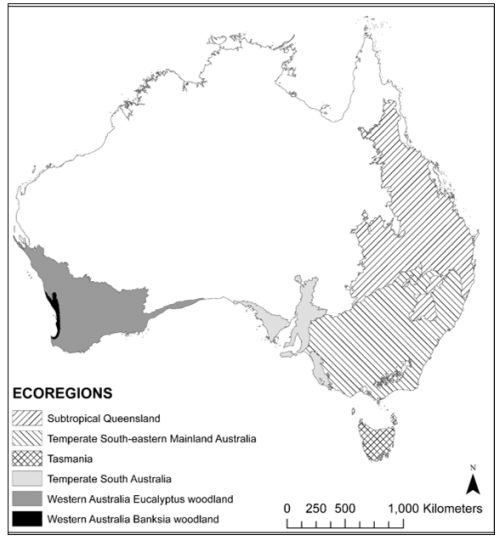 Six sub-divisions of the Woodland Bird Community were identified across Australia.

For this presentation Hanna focused on points 1. Decline in geographic distribution and 4. Reduction in community integrity.

Hanna spoke about the change to tree cover across Australia since 1750. This was used as a conservative estimate to where the maximum cover of woodland birds would have been. Based on the EPBC Criteria of 50% decline or more in geographic extent since 1750 the whole woodland bird community across Australia does not qualify as threatened. (There must be 50% decline or more to qualify as vulnerable, 70% or more – endangered, 90% or more – critically endangered).

Hanna pointed out that some of the sub-regions did not meet the criteria whilst others did. But taken as a whole the decline in geographic decline does not qualify.

Hanna discussed changes to woodland bird habitat which include weed invasion, on-going grazing of habitat and Noisy Minor invasion. A group of experts undertook a process of rating woodlands based on species lists from current and historical survey data (species richness, proportion of species < 50 grams which are Noisy Minor vulnerable species, species more common in intact woodlands, species more common in degraded woodlands). From this work a formula was derived which could be applied to a 2-hectare 20 min. bird survey used to rate the condition of a woodland bird community from 0% to 100% (Low condition 0-25%, Moderate 25-60%, High 50-75% and Pristine 75-100%).

Calculations were undertaken to determine the condition of the woodland bird community over different time periods to ascertain the change in condition over time. This work was repeated for each of the 6 ecoregions. Two examples are shown below. 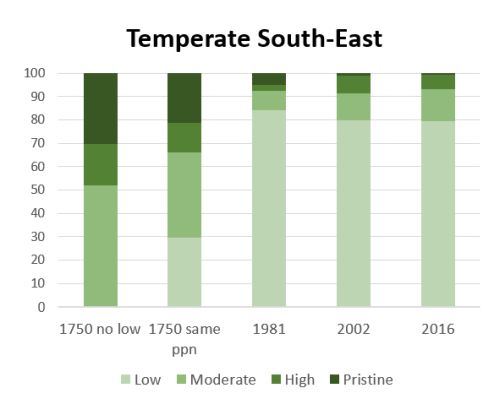 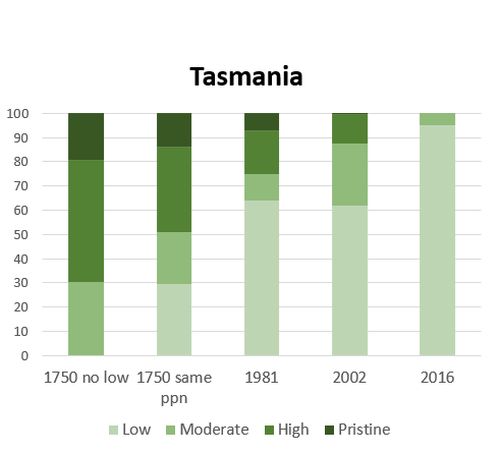 Is the woodland bird community threatened based on decline in community integrity? (Between 1750 and 2016) – yes

Hannah explained that to apply the EPBC Act Criteria based on decline in community integrity there must have been a decline of 50% which can’t be recoverable in the near or medium future.

All communities have experienced at least a severe (50% decline): Endangered

Based on the changes in community integrity the woodland bird community is threatened and a Nomination to the EPBC Act was submitted in 2017.

Hannah thanked the team members who have worked on this project. 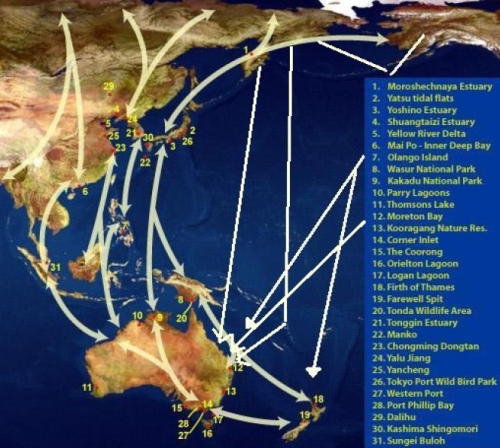 The need for population estimates

The project was carried out for the Department of Environment & Energy in 2016 to revise the population estimates for the 37 migratory species currently Listed under the Environment Protection Biodiversity Conservation Act 1999 (EPBC Act).  Migratory species are included under matters of National Environmental Significance under the EPBC Act, there are also several species Listed as Vulnerable, Endangered and Critically Endangered.

In order to assess the level of impact from a proposed action it is necessary to understand what proportion of the population is supported at any particular site and the global population. Population estimates are critically important to underpin the thresholds for the Act. For example, for migratory shorebirds the EPBC Act is triggered if the site supports 0.1% of a Nationally important site or 1% of an Internationally important site.

Birgita spoke about the rapid and significant declines across a whole range of shorebird species in recent years. These declines are recorded despite there being more data available from increased shorebird monitoring.

Birgita discussed the data used in the project which included summaries from existing count data (Australia and overseas) and estimated extent of unsurveyed coastal shorebird habitat. Modelling of Australian inland population and analysis of population size using breeding distributions and densities. Information from breeding grounds was also used. An expert review process was used throughout the entire process. 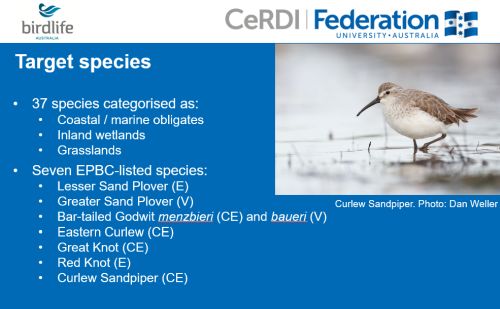 Birgita pointed out that most the data have been collected by volunteers over the years which represents a massive volunteer effort and one of the longest running citizen science programs in Australia.

Birgita discussed the analytical process in some detail (only brief summary here).

Modelling count data – used the most recent data, focus between November to March when populations are at terminus sites and most stable.

Breeding distribution & density – use of Birdlife International mapping of breeding range to work out relationship between population size estimate, breeding range and density within the flyway. Estimated flyway populations for 19 species. 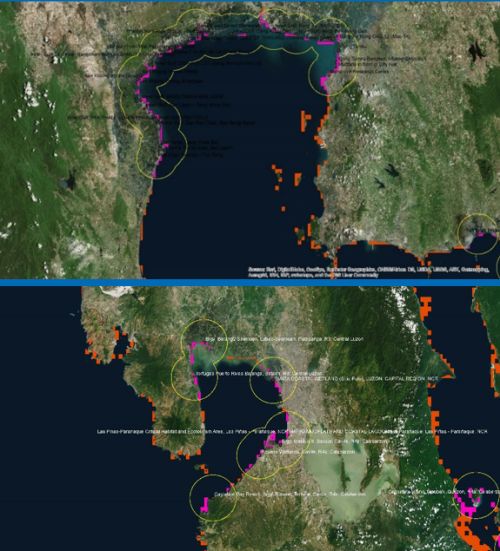 The count coverage was extremely variable despite there being a lot more data over many more sites. The Northern Territory still remains an area where there are large data gaps. Overseas there are many areas across Asia which are poorly covered by counts e.g. only 4% coverage in Indonesia. The team undertook substantial adjustments to state-based estimates and extrapolation figures which were very conservative.

Birgita spoke about the fact that some of the flyway totals from count data were so low that breeding population counts were used in the population estimates. 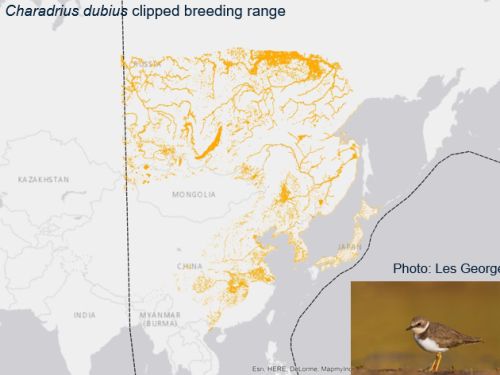 The combined knowledge of the team and expert reviewers was used to determine the best estimate for each of the 37 species using information from modelling, counts and breeding grounds.

Birgita emphasised the new population estimates have been derived from completely different methods and data. They should not be used to compare against old estimates to infer trends.

Birgita acknowledged the people involved in the project, from the counters and coordinators that make the shorebird surveys happen to those involved in workshops, modelling and reviewing the work. She also thanked supporters of the project.

Katherine focused on the Murray-Darling Basin and spoke about the massive reductions in water flow which are now only about one third of what they once were. With added impacts from climate change the incidence of higher temperatures, less winter rainfall, more time in drought and more frequent droughts in the area the system is going to suffer even less water with a possible further 11% reduction by 2030.

Katherine spoke about the longest and most sever drought on record (1997- 2010) which resulted in flows in the Murray River being 50% lower than the long-term average. The drought was broken in 2010 with higher than average rainfall. 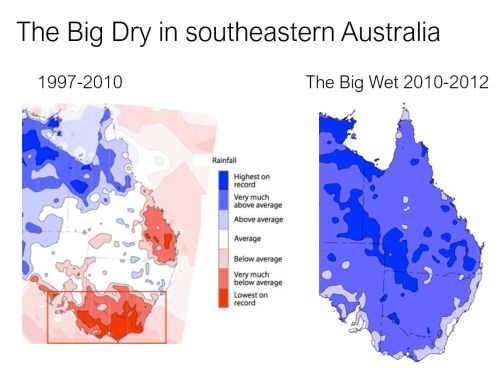 Work led by Shaun Cunningham (published S. C. Cunningham et al. (2018) Land degradation and development) studied the condition of floodplain forest stands at a number of sites throughout the drought. Studies found that since 1990 there has been a steady decline of forest stands in good condition on the Murray River with more pronounced declines since the big dry. 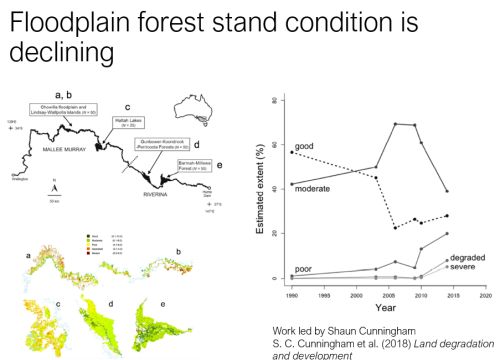 Forest stand condition monitoring sites. Chart demonstrating a rise in the extent of degraded sites and decline in moderate and good sites.

Katherine’s work studied bird data at Gunbower Island and how birds responded to the drought between 1998 to 2009 and again after the big wet post 2013. The aim was to measure how birds responded to the drought and measure resistance (degree of decline) during and after the drought. During the Big Dry 22 of 31 spp. (71%) declined. After the Big Wet 2 of 22 spp. recovered completely; 3 had incomplete recoveries, 17 spp. (77%) did not recover. Also, studies found there was no increase in breeding activity after the big wet.

A large proportion of floodplain birds declined during the Big Dry and largely failed to recover.

Further studies were carried out in 2017 to see if there is any change in recovery but results have not been analysed yet.

Katherine discussed the need to compare how declines of bird species at the study sites compare to forests in the wider region at the time of the big dry. Bird Atlas data was used to analyse trends for 144 terrestrial bird species between 1998 -2013 for the entire Murray-Darling Basin. The study looked at species present in both zones, floodplain vs. non-floodplain. 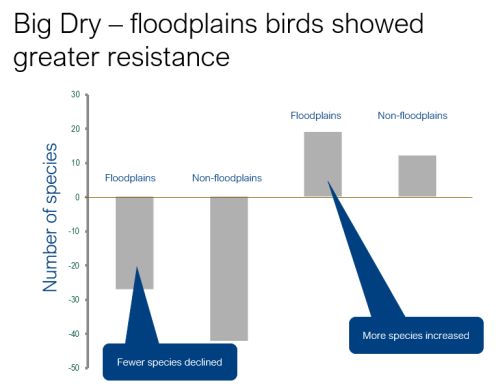 Katherine discussed the movement of 3 species (White-naped Honeyeater, Grey Currawong, Golden Whistler) onto the floodplain during the big dry and off the floodplain after the wet.

Green tongues into the arid zone

Katherine spoke about where bird species occur throughout the Murray-Darling Basin. Using Birdlife data, she was able to determine that floodplain areas have the capacity to carry some species into dry areas further than they would otherwise occur. 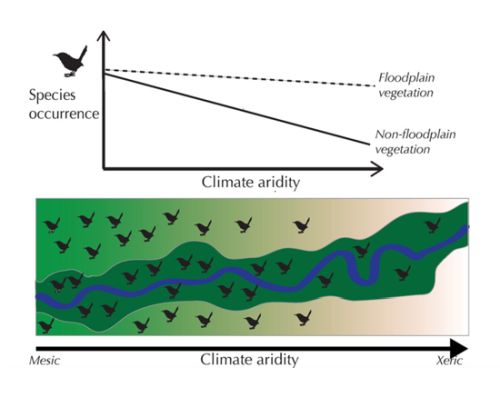 Using Bird Atlas data from the Murray Darling Basin for 1998-2013: Murray and Darling River corridors Katherine found aridity had a negative effect on the occurrence of 58 species (45%) of overall species. 22 species (38%) had the effects of aridity moderated in floodplains. 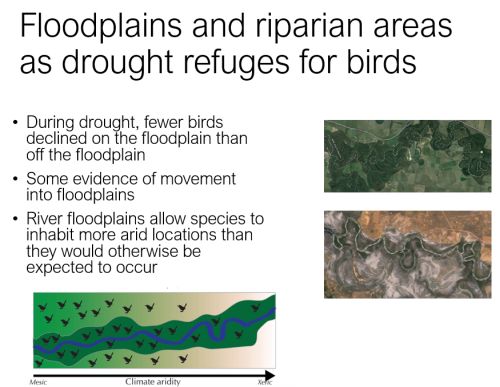 Katherine spoke about some work she did with Parks Victoria to look at forest condition modelling based on Shaun Cunningham’s work between 2003 to 2012 to identify areas of importance on the floodplain which serve as havens during droughts.  This type of work is important as provides land managers with information they need, particularly in drought conditions.

Returning water to the environment 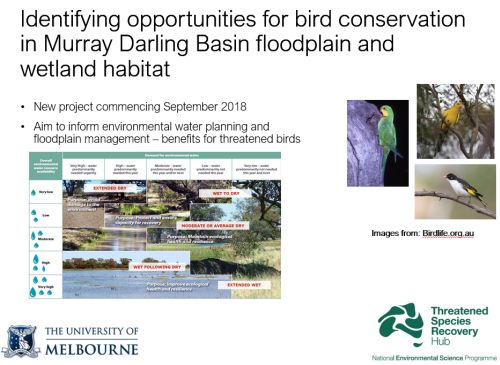 Fern provided some updates on Citizen Science activities being undertaken at ARI.

Scoping paper developed for people in DELWP, there is also a brochure for external use ‘Citizen Science: You and nature’ which outlines the benefits of citizen science projects (to both participants and scientists), how an effective citizen science programs can be created.

ARI has a Monash University student looking at behavioural change and how it relates to Citizen Science.

Day 1 – invited participants will be looking at knowledge gaps and priorities relating to Victoria’s biodiversity strategy and identifying knowledge gaps that could be filled with citizen science.

For more information regarding the workshop e-mail Fern Hames