This video conference was supported through resources and technology provided by the Department of Environment and Primary Industries, Victoria. SWIFFT wishes to thank speakers for their time and delivery of such excellent presentations.

The third video conference for 2014 had a theme on Wildlife on Farms.

Sally and Peter spoke about their 34 hectare property near Maldon in Central Victoria which they have had since 2001. The land was formerly used for sheep grazing and was devastated by wildfire in the 1980's. It was almost completely barren when they embarked on revegetating the property to encourage birds. Revegetation comprised destocking and planting about one third of the area focusing on controlling gully erosion with the remaining area  being left to undergo natural regeneration. Rabbit control was also an important part of the revegetation project.

Sally spoke about the difficulties of meeting targets set in Enviro grants and the difficulties of having to undertake plantings within prescribes time frames which meant trying to plant in drought years, resulting in loss of about 60% of their plantings. Since then Sally and Peter undertake revegetation at their own pace within their own resources and have carefully planted and tended to about 4,000 plants all with local providence to the area.

Sally and Peter have tried to restore the property to what it may have looked like in the past. This meant a combination of upper story, mid story and ground species. There has also been a significant level of natural seeding about 40 metres in from the adjoining forest with grey box and ground species such as orchids, lilies, rice-flower etc.

As the revegetation has proceeded there are more signs of biodiversity with mosses, fungi, ants, echidna, quail, sand goanna and nesting eastern rosellas on the property.

There is still a level of on-going weed maintenance and possible control of some patches of golden wattles which might smother out other species of flora.

Many threatened species are highly reliant on private land where patches of   remnant vegetation exist. These patches can contain valuable feeding and/or breeding resources for woodland birds with some species  undertaking specific migrations to these areas e.g. when there are seasonal flowering events. About 65% of all Regent Honeyeater records in the past decade come from private land. He also mentioned the Grey-crowned Babbler,  where about 70% of all records in south-east Australia come from private land.

This project was undertaken by Birds Australia (now BirdLife Australia) and was designed to assess the effectiveness of environmental works in relation to bird populations in the rural landscape. It also provided an opportunity to answer some common questions that farmers had about how to increase the bird diversity on their farms.

The project had 330 farms participating from Queensland, New South Wales, Victoria, South Australia and Western Australia. Farms had an average size of 608 hectares and were beef, sheep or wheat-sheep properties. Around 500 volunteers were involved in the work, and these were mostly farmers or people working with farmers. During in the project 430 species of birds were recorded.

Sustainability in modern agriculture means ensuring that biodiversity is maintained and enhanced, and that ecological processes continue. The Birds on Farms survey led to the development of 10 simple guidelines for attracting birds back to farms, and so improving the natural resource base on which agriculture depends.

This  was a Caring for our Country project which had a multi species recovery approach. The project involved BirdLife Australia and three project partners – Trust for Nature (Vic), Nature Conservation Trust of NSW, and Tasmanian Land Conservancy.

The main targets for this project were:

Dean went into some detail about the process used to determine high priority areas for investment which would yield the greatest results for species conservation.

Because the interpretation of vegetation classifications varies between states the project used Interim Biogeographic Regionalisation for Australia IBRA Regions and sub-regions. The level of threat for each bird species within the project area  was determined by analysing all available data and assigning a threat value level.

Records from various databases were analysed with about 150,000 records being identified across the study area. The  study area was divided up into 5 km x 5 km grids and a process of ranking each cells value for woodland birds was undertaken  using species records for each cell and the species ranking. In all the study area ranked about 20 million hectares of woodland bird habitat.

Dean spoke about some examples of covenanted properties, one being at Quorrobolong in the Hunter Valley, NSW. A 47 Ha property covenanted in 2011. In 2013, 50 Regent Honeyeaters were observed on the property which is significant considering the entire population of Regent Honeyeaters could be as low as 400 individuals.

Outcomes from the project

Dean spoke about re-invigorating both previous projects which would involve re-visiting properties from the original study, re-doing the analysis and prioritisation process with new data sets and see what has changed.  He felt the project could look at natural regeneration vs. planting vs. direct seeding for woodland birds.

Dean said there is also a need to highlight the good news stories from previous work so that people can see some of tangible results from conservation efforts such as  doubling of the Grey-crowned Babbler population at one of the sites since 2001.

Birds on Farms Mk II could also examine the role of connectivity in the landscape in enhancing biodiversity benefits of habitat protection. Dean felt it is also important to encourage landscape scale approaches to conserving and enhancing habitats on farms, using birds as indicators.

Dean said funding this type of project now requires a different approach.  A Birds on Farms project advisory group could potentially be established with key stakeholders such as Landcare, CMA/NRM/LLS, DEPI (Vic), OEH (NSW). It is extremely important to identify potential funding streams and options to build on the good work of recent projects.

Gib explained how the Ballarat Regional Treegrowers (a local branch of Australian Forest Growers) have strived to develop a farm forestry program of integrating conservation with tree production.

Through working in with Landcare nurseryman and ecologist Stephen Murphy who developed Revegetation design principles for restoring habitat for native flora and fauna across bare farmland, the group has been able to incorporate production with biodiversity, resulting in a collaborative publication titled 'Recreating the Country - a blueprint for the design of sustainable landscapes'. This publication introduces the concept of a biorich plantation - a model of a plantation which acts as a bridge between pure environmental habitat planting and farm forestry.

A biorich plantation aims to deliver high quality biodiverse habitat combined with forestry trees from which future income can be derived from timber produce and seed resources.

Gib spoke about a 15 ha biorich plantation demonstration site at ImLal near Ballarat which comprised degraded farmland that had been used as a buffer zone to a quarry site.

After completing a revegetation plan which included direct plantings, direct seeding and natural regeneration, works commenced in 2010. The site would eventually comprise about 80% biodiverse revegetation and 20% forestry. In order to replicate the original natural forest in the biodiverse core a survey of Ecological Vegetation Classes (EVC's) in 12 woodland and forest reserves in central Victoria was undertaken. These surveys were used to formulate four key principles observed from nature to maximise biodiversity and achieve productivity on a sustainable basis.

Gib said the abovementioned principles have been used at the ImLal biorich plantation site with very encouraging results so far. A bi-monthly bird survey to measure species richness and abundance has also been built into the project.

Tanya spoke about the bird surveys carried out at the ImLal biorich plantation site. The surveys are designed to measure any  overall increase in bird diversity and numbers over time as the plantations establish.

Tanya used the BirdLife Australia fixed rout method, this incorporates using the same route at roughly same time and effort. She stressed this type of survey provides information over time and is not comparing habitats or places. Surveys are conducted every three months for a decade or more.

The survey rout includes a mix of open-country, forest species and waterfowl. Since 2010, 19 surveys have been conducted with 77 species recorded (74 native species, 3 introduced species).

Tanya said the most common species recorded were Crimson Rosella (recorded all 19 surveys), Superb Fairy-wren and Noisy Miner. Other common species included; Welcome Swallow, Eastern Rosella in the open country and Grey Shrike-thrush and Yellow-faced Honeyeater in remnant Swamp Gums along with Australian Magpie. Spotted Pardalote were only recorded on 4 surveys, Striated Pardalote 9 surveys and White-eared Honeyeater on 15 surveys.

Tanya said they had not yet recorded Brown Treecreeper or Varied Sitella which are usually seen in intact forest. Robins and Whistlers and the White-fronted Chat were also in low numbers.

The bird surveys included areas of paddock replanting even through the regrowth was limited but after 4 years of plantation establishment there was a sudden increase in species with Brown Thornbill, Grey Shrike-thrush, Yellow-faced Honeyeater  and Superb Fairy-wren. Tanya referred to a paper which summarized the increase in woodland bird diversity in relation to shrub layer. (Smallbone, Matthews, Lunt 2014). 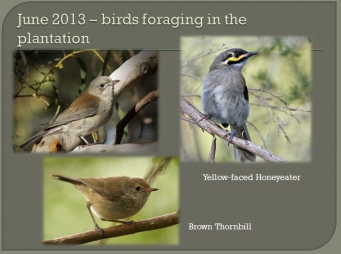 Tanya spoke about the potential issue of Noisy Miner colonization impacting on other woodland bird species but observations to-date have not detected any problems at this site.

Tanya thanked all the people involved. The study will continue with Grant Palmer at Federation University now taking a lead role.