This video conference was supported through resources and technology provided by the Department of Environment and Primary Industries, Victoria. SWIFFT wishes to thank speakers for their time and delivery of such excellent presentations. 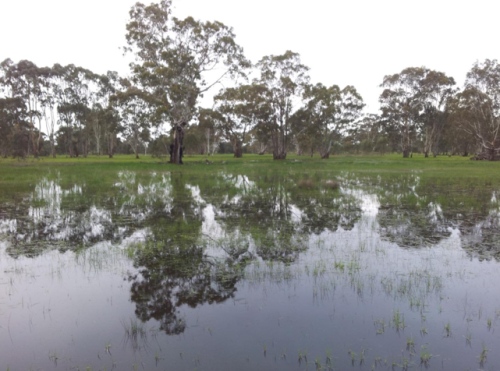 About the Nature Glenelg Trust

Mark said the Nature Glenelg Trust  (NGT) is a not-for profit organisation which undertakes grant funded biodiversity project delivery and professional consulting on projects related to habitat protection and restoration, with an emphasis on wetlands. The NGT focal region extends  between Melbourne and Adelaide.

The NGT incorporates the use of sound science and conservation based research to enhance management outcomes. The NGT also seeks to involve the community in projects.

Why focus on wetlands?

Mark said wetlands are ecologically significant and also support a diversity of threatened species. Wetlands are important in terms of providing environmental services, for example, clean water, flood buffering and aquifer recharge. Wetlands provide beauty and athletic values to landscapes as well as recreational opportunities. Wetlands also have many times the carbon storage potential per unit area when compared to terrestrial soils.

Wetlands were once a  highly prominent feature of the landscape but the loss of wetlands has been dramatic with 90 -95% drained in the south-east of South Australia and over 60% drained in the Glenelg Hopkins region of Victoria.

In terms of restoration, wetlands are highly adaptive ecosystems which depending on the circumstances can have a capacity for rapid restoration and recovery potential. 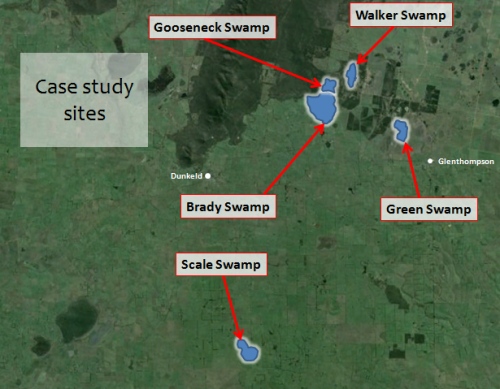 At each site there was landholder support for restoration works.  GNT worked closely with landholders and the community to develop sustainable wetland restoration outcomes.

Mark explained that GNT thoroughly researches historical information and past references to gain an understanding of what a particular  wetland would have looked like and what drainage/diversion works were carried out in the past. This is important background work before developing restoration plans. 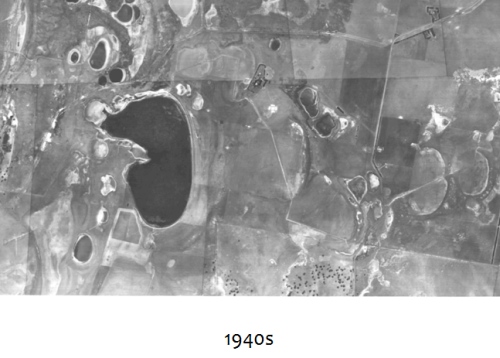 The use of LiDAR technology to build a digital elevation model is very useful in displaying where water would go at different elevations. This is important in determining the expected inundation zone and works needed to restrict outflows and setting spill levels. 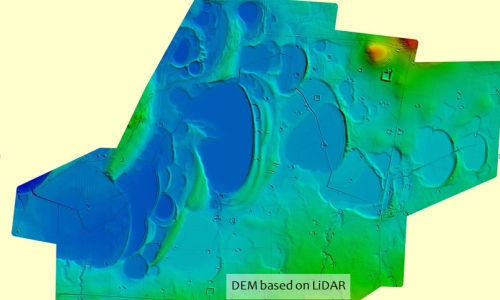 The NGT is able to work across state borders and different land tenures which means they can adapt and apply knowledge gained from previous projects.

Mark said allocating time to gather history and data about the wetland and applying new mapping technologies is an essential part in wetland restoration planning. Building lasting relationships with landholders and the community is very important, in terms of planning, works and on-going monitoring.

Some of the restoration works are as simple as blocking drains.  At other sites levee structures with spillways were built to manage water levels. At the Brady, Gooseneck and Walker Swamps a trial wetland restoration approach was taken which incorporated semi-permanent and easily adaptable geo-fabric sandbag structures which can be adjusted. If trials prove successful more permanent measures can be taken, which is the case for Brady and Gooseneck Swamps in 2015. 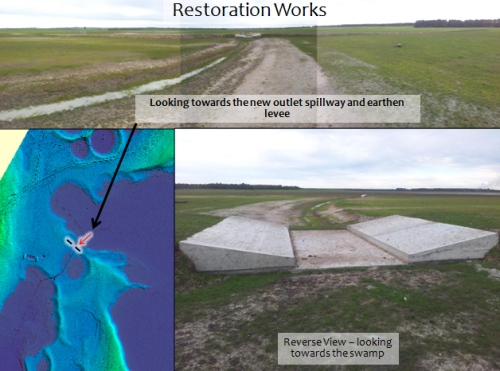 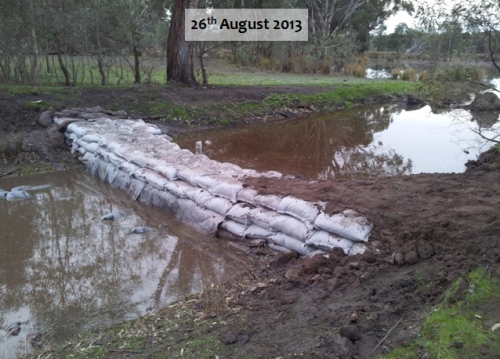 Mark spoke about the fact that on many flat wetlands even small changes to the structure height can make a significant difference to the area of wetland retained and extending the time of inundation thereby having a significant impact on increasing biodiversity values.

A key feature of the wetland restoration process is to involve the community and have a shared interest in the projects.

At some wetland restoration sites data loggers are used to track water flow and elevation.

Depending upon the site, ecological monitoring is carried out to various levels. Monthly bird monitoring counts are undertaken at the trial sites by the Hamilton Field Naturalists Club. Fish surveys and the use of frog recorders are also used along with vegetation monitoring to measure floristic change.

Mark gave a special thanks to the private landholders of the Case Study sites presented along with Hamilton Field Naturalists Club, Parks Victoria, Department of Environment and Primary Industries,  Australian Government and the Glenelg Hopkins CMA.

A public open day to demonstrate wetland restoration will be organised for Gooseneck Swamp on 23 November 2014.

Cath's work was undertaken as a contract for Natural Resources – South East (Department of Environment, Water & Natural Resources). The project had a State-wide Technical Reference Workshop. Its aim was to plan and undertake surveys of Seasonal Herbaceous Wetlands (SHW) in South Australia and provide advice on their  condition, current and future management.

A new state-wide layer of was produced along with descriptions of what characterises this type of wetland in South Australia.

The validation of wetlands found the area of occupancy of the intact wetlands was only 563.12 ha from the predicted 7,296ha total in the listing. This means the situation is much worse than originally estimated. It was also found that over 70% of SHW are less than 5 ha.

Cath spoke about describing different types of Seasonal Herbaceous Wetlands and grouped them into six main types which are summarised below and described in the final report. Full descriptions, Dickson et al. 2014.

Of the 77 wetlands identified as meeting the listing criteria 59 had degraded buffers with grazing and pugging causing damage. Weed control was identified as the major action for most sites followed by altered stocking regimes. Managers need to be aware  of the difference on wetland ecology between grazing cattle compared with sheep and the different times of grazing. There are examples where more true to form herbaceous vegetation exists on sheep grazing sites compared with cattle grazing.

Seasonal Herbaceous Wetlands  are very dynamic with and are highly influenced by management and therefore require periodic reassessment. Even in cases where passive management  is applied changes to plant community structure can occur.  Changes to groundwater and surface water movement can also have a dramatic impacts on these types of wetlands and their classification.

There is a need to review the EPBC listing definitions of Seasonal Herbaceous Wetlands  because the systems are so dynamic in their response to climatic conditions.

Matt explained the Corner Inlet Connections is a partnership project co-ordinated by the West Gippsland Catchment Management Authority to protect the Corner Inlet Ramsar Wetland and the Nooramunga Marine Park.

The project covers the catchment and all the waterways that flow into Corner Inlet and Nooramunga. The catchment contains  highly productive plantation forest, dairy and grazing enterprises which ultimately influence the health of the marine ecosystem, particularly the sea grasses. 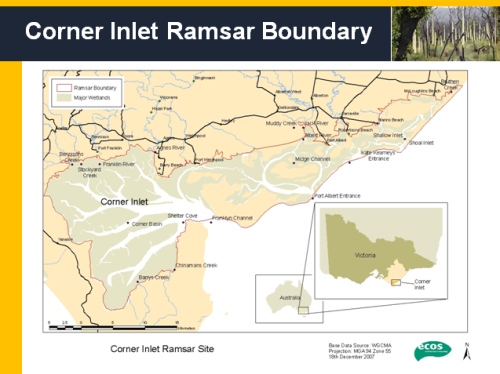 Matt spoke about the values of the inlet which contains a diverse range of habitats  including fringing salt marshes, mud flats, deep channels, shallow seagrass beds, and barrier islands. These habitats support a diverse number of flora, fauna and fishes. The area is a Wetland of International Importance under the Ramsar convention, it is also a East Asian-Australasian Shorebird Network Site. The area contains the most southern occurrence of White Mangroves in Australia and contains a variety of seagrass communities including zostera, pyura and posidonia.  The marine habitats support the third largest commercial bay and inlet fishery in Victoria. 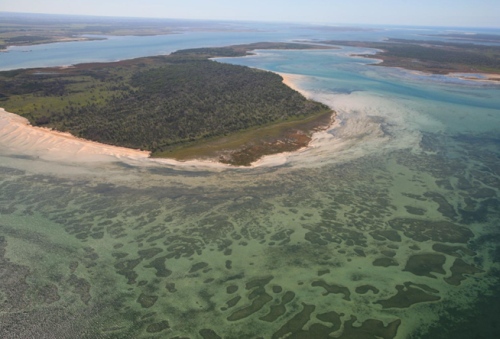 Seagrass beds are a major feature of the marine environment 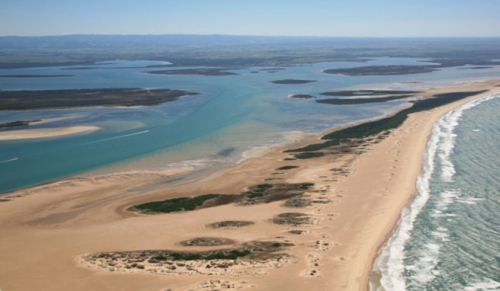 Barrier Islands protect the inlet from Bass Strait, these islands support a diverse range of flora and fauna.

The inlet's proximity and dependence on a healthy catchment requires support from all people in the catchment to reduce nutrient inflow into the system.

The WGCMA has identified thirteen river catchments which have been broken down into 67 sub-catchments. Erosion and inflow of nutrients are a major focus of catchment management. The introduced Spartina is a major threat to mud flats and requires on-going control. Fencing to protect over 700ha of saltmarsh habitat has been achieved over the last 4 years. A major achievement has been the fencing and revegetation of the bottom 15 km of the Franklin River. 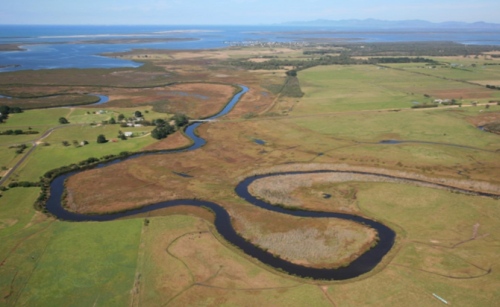 The health of the marine environment is directly influenced by catchment management. 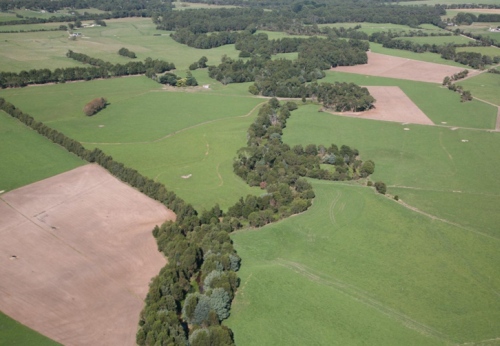 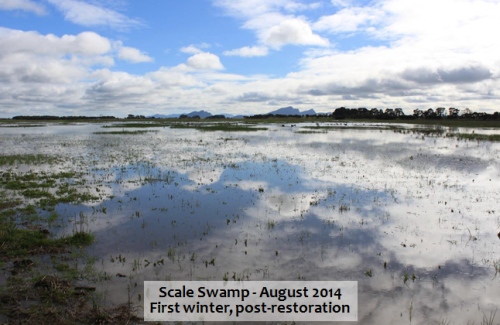 In terms of restoration, wetlands are highly adaptive ecosystems which depending on the circumstances can have a capacity for rapid restoration and recovery potential.