The Turquoise Parrot Neophema pulchella is a beautifully coloured small sized parrot endemic to eastern Australia.  It is a popular species with aviculturists but subject to strict licensing requirements and is fully protected in the wild.

The Turquoise Parrot is about 200-220mm long with a 320 mm wingspan. The male Turquoise Parrot is the most brightly coloured with highly distinctive plumage, bright green posterior and a turquoise-blue crown face. It has a chestnut-red patch on the upper-wing, with turquoise-blue shoulders, grading to deep at the flight-feathers. The upper margins of the breast have an orange tint, whilst generally a yellow abdomen is complemented by an orange centre. The female Turquoise Parrot and immature adults are somewhat duller in colour, have whitish lores, a green throat and breast and no chestnut-red on the shoulder or the upper-wing area (description from Higgins 1999; Pizzey and Knight 1997).

The Turquoise Parrot range extends from east Gippsland in Victoria to New South Wales and into south-east Queensland. Its distribution is considered patchy and primarily determined by areas of suitable habitat.

In Victoria, the Turquoise Parrot is mainly found in North East Victoria and east Gippsland. In east Gippsland it predominantly occurs around Mallacoota, but also north along Wingan River to Wangarabell, and near Bairnsdale and Bruthen; sometimes farther north along Snowy River, near Suggan Buggan. This species has also been recorded in north-east districts, between Echuca and Wodonga, and south to near Swanpool, south of Benalla (Traill 1988). Recent records from the Central District, in Glenburn and Yellingbo suggests several fragmented populations that may be re-established or drought-related within former range (Quin and Reid 1996).

The Turquoise Parrot is considered a local icon of the Glenrowan district which forms an important population across its range.

Individuals also inhabit savanna woodland and riparian woodlands and forests, including those on alluvial flats, such as stands of River Red Gums, Eucalyptus camaldulensis or Eucalyptus camphora (Frith 1952; Jarman 1973; Morris 1980; Campbell 1915; Quin and Reid 1996). The Turquoise Parrot may also occur in farmland, predominantly pasture, with remnant trees, living or dead, or tree stumps (Quin and Baker-Gabb 1993). It is seldom seen along roadsides and in orchards (Pizzey & Knight 1997).

Dead trees comprise an important part of habitat and are preferred for look out posts and nesting.

This species rarely forms large flocks and a commonly observed in pairs or small parties of 6-8 individuals (Higgins 1999). Larger flocks of 20-30 birds may occur from autumn and through winter after the breeding season.

In the Warby Ranges-Chesney Hills district low groundcover plants such as Common Raspwort, Black-anther Flax-lily and Native Geranium. Fruits from small shrubs such as Bush-peas, Guinea-flower, Daphne Heath and Fringe-myrtle are also consumed. Some weeds such a Capeweed and Blue Heliotrope are important food plants seasonally.

The Turquoise Parrot main breeding season is from August to January (August to November in North-east Victoria).  Turquoise Parrots nest in hollow-bearing trees, either dead or alive also, in hollows in tree-stumps (dead, ringbarked, burnt or coppicing), fallen logs and fence posts (Chaffer and Miller 1946; Barker 1953; Jarman 1973; Quin 1990). Preferred breeding habitat is an ecotone between farmland and forests. Open grassy forests and woodlands; in gullies and on low slopes of foothills that are moist and seasonally waterlogged are used; occasionally they breed on ridges (Quin 1990; Quin and Baker-Gabb 1993).

Hollows tend to be small diameter but deep and located 1.5-3 m above ground.  The use of artificial and natural nest boxes has been successful when positioned in the right place.

A standard clutch usually consists of 2-5 eggs, although up to 6 eggs has been recorded. Some breeding pairs may also raise a second brood during summer months (Higgins 1999). Both parents feed the young which remain in the hollow for about 4 weeks after the 18 day incubation period. The female only leaves during incubation of the clutch to drink, during which time the male accompanies her (Higgins 1999; Quin 1990).

In the early part of the century the Turquoise Parrot suffered a severe decline in numbers, with certain observers even regarding it as extinct (Campbell 1915). Populations recovered somewhat from the 1930s onward (Chaffer and Miller 1946; Frith 1952; Forshaw 1981; Blakers et al. 1984) and in Victoria populations in the north-east of the state are still increasing in distribution and numbers (Quin 1990). However, the Turquoise Parrot is still considered as restricted and rare in Victoria (Forshaw 1981; Anon. 1987).

The Turquoise Parrot is threatened by:

Long term conservation efforts are aimed at establishing a healthy, self-sustaining wild population requiring no input of captive-bred stock or other management effort. 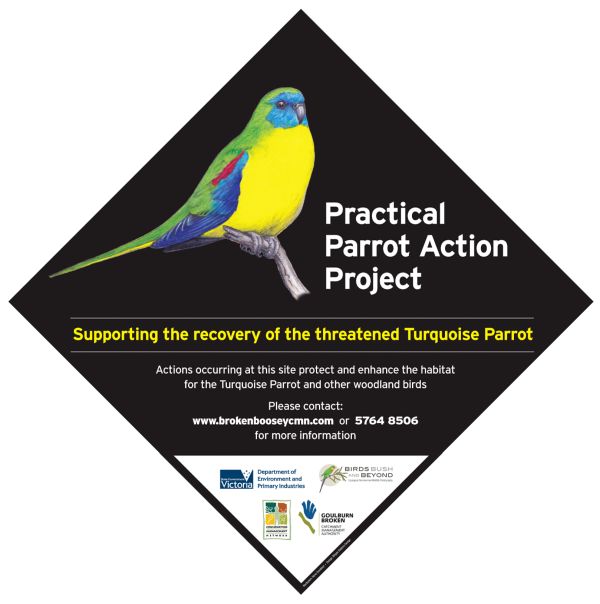 This project is managed by the Goulburn Broken CMA, through the Broken Boosey Conservation Management Network. The project focuses on the Turquoise Parrot in the Warby Ranges-Chesney Hills district, with an emphasis on understanding how and why it uses the sites where it occurs through regular monitoring, and working directly with farmers, landholders and schools to protect and restore key areas of habitat, especially nesting sites, on private land.

The project started in 2014 with a Threatened Species Initiative grant from DELWP for two years. During this time a baseline study was carried out, 150 nest boxes were built and located on private land, with some monitoring. The project involves significant landholder engagement, community talks and presentations, field days, media including ABC radio, nest box building workshops and a booklet ‘Turquoise Country’ by Chris Tzaros.

The project has realised a tremendous amount of community interest and support for conservation of the Turquoise Parrot. The project launch in May 2014 was attended by 94 people, workshops attract a similar level of attendance.  A field day had 105 attendees and other events have drawn a healthy attendance.

Landholders who wish to be involved When nest boxes are set up on private property, we encourage the landholder to get involved, as we need them to monitor and be responsible for the nest boxes.

Between 2014 and 2018 there has been six turquoise parrot-focused projects which the Broken Boosey Conservation Management Network has undertaken in the Warby Ranges area, the Chesney Vale Hills area, Everton/Chiltern area and Warby Ranges-Killawarra regions in North-east Victoria.

The total number of built nest boxes installed in the area will be 552 by the time this latest project is completed in 2020. Plus, a further 150+ ‘nest boxes’ that have been made from hollow logs that were salvaged from the 2014 Wunghnu Complex bushfires ‘clean up’.

Chris Tzaros carries out monitoring at a selection of sample sites and has recorded around 20 nest boxes which are known to have fledged chicks.

In North East Victoria, placement needs to be in the higher country preferably in known feeding  or nesting habitat such as mixed Blakely’s Red Gum and Red Stringybark woodlands.

Boxes should be within 100 m of forest or if positioned within the forest 100 m from open land. There needs to be adequate levels of shade and within 250 m of water with gently sloping banks.

It has been found the Turquoise Parrot moves about a lot looking for nesting sites. Therefore, boxes need to be located across as much suitable territory as possible.

Nest boxes can be attached to stumps, low on dead trees, live trees and ‘stand-alone’ using parallel star pickets can be used.  For attachment to live trees a large screw through the backing board is recommended. It has been found the ‘stand-alone’ method may reduce predation from climbing species.

It is important to monitor nest boxes prior to and during the breeding season (Autumn and Spring) to ensure they are free from unwanted pests and have enough saw dust/shavings etc. at the base for nesting.  If nesting detected avoid disturbance. Reports successful nesting to project co-ordinator.   Boxes need to be cleaned out at the end of the season and made ready for the next breeding season.

Chris Tzaros, Bushland Birds and Beyond.

Anonymous. (1987) Conservation in Victoria: 1. Plants and Animals at Risk. Department of Conservation, Forests and Lands, Melbourne.

Pizzey, G. And Knight, F. (1997) Field Guide to the Birds of Australia. Angus and Robertson, Sydney.