The Variegated Pygmy Perch is one of the less seen but very beautiful native freshwater fish of Australia. It only occurs in the Glenelg River system in south-west Victoria and a small number of sites east of Port Macdonnell in south-eastern South Australia.

The Variegated Pygmy Perch is one of the Percichthyidae or temperate perch family and is related to a small group of fishes referred to as Pygmy Perch (more recently considered to be within their own family Nannopercidae). This species was only recognised in 1986 and formerly known as Ewens Pygmy Perch due to its presence in Ewens Ponds in South Australia (Kuiter & Allen 1986).

All Pygmy Perches are small oblong shape fish having one dorsal fin with a deep notch and the lateral line divided into two parts. Detailed identification between species of Pygmy Perch include among other features, the counting of dorsal spines and pectoral rays which is elaborated in Kuiter et al. (1996).

The Variegated Pygmy Perch grows to about 60mm, colouring can vary from shades of green to dark brown above, to light brown and gold/yellow on the sides grading to a whitish or orange belly, it usually has a dark spot on the base of the caudal fin, and a series of dark spots that form two broken horizontal lines. 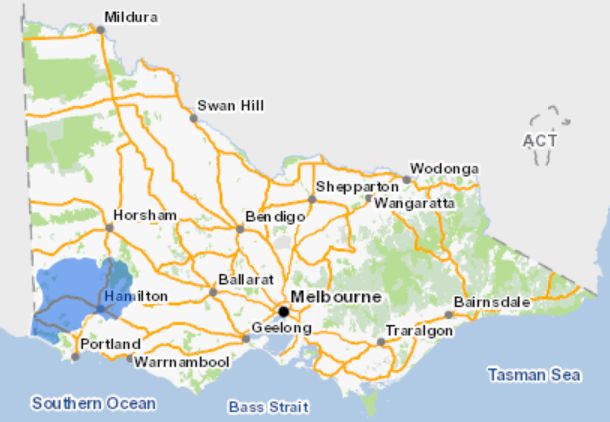 In Victoria, the Variegated Pygmy Perch is only found in the Glenelg River system, encompassing the Glenelg, Crawford and Wannon River catchments where a total of 13 sites have been recorded.

Other populations of Variegated Pygmy Perch occur approximately 25 km west of the Victorian populations in south-east South Australia where they are found in Karst Rising Spring systems; Deep Creek (including Stratmans Pond) and Eight Mile Creek (including Ewens Ponds). (Veale pers. comms. 2017, ALA 2017, Allen 1989a).

Variegated Pygmy Perch inhabit relatively shallow freshwater streams with a bias to sites with high levels of healthy aquatic vegetation, low levels of siltation and low salinity (660-2810 mg/L). Unlike the habitat preference for other Pygmy Perch it is found in areas with moderate to high water flow. Because the known populations are quite fragmented it is likely that remaining stocks are genetically discrete (Hammer 2000).

Remaining populations of Variegated Pigmy Perch are now confined to only a small percentage of what may have been its former range, this indicates that significant levels of environmental stress have already been placed on this species. Threats to remaining populations are similar to those faced by many species of native freshwater fish, however in the case of Variegated Pygmy Perch threats are magnified due to fragmented populations and increased risk of loss should environmental conditions deteriorate.

Competition and predation from introduced species

Whilst any one of the above threats is capable of  impacting on the Variegated Pygmy Perch, it can be difficult to gauge the level of impact on such a cryptic species. This may result in underestimating the level of a singular threat and complacency in regard to how the cumulative impact reaches a point where the species can no longer survive.  It is therefore extremely important to consider the whole range of threats and how these combine to influence the viability of Variegated Pygmy Perch in our waterways.

The Glenelg Hopkins Catchment Management Authority (GHCMA) has taken a lead role in protecting and enhancing known populations through improved habitat management and restoration conditions which support this species.

Part D of the Strategy

The type of management activities includes where approprite to each priority location:

Fishway installed on the Glenelg River assists native freshwater fish such as the Variegated Pygmy Perch to recolonise sections of the river from which they were previously cut off from. Image: Glenelg River fishway at Dergholm, Stephen Ryan GHCMA.

Surveys have been an ongoing program which has been conducted through GHCMA and the Arthur Rylah Institute which has significantly increased information about populations of Variegated Pygmy Perch and their health.

As well as sections of the Glenelg River, Crawford River, Wannon River, Glenaulin Creek and Stokes River other survey waterways include: 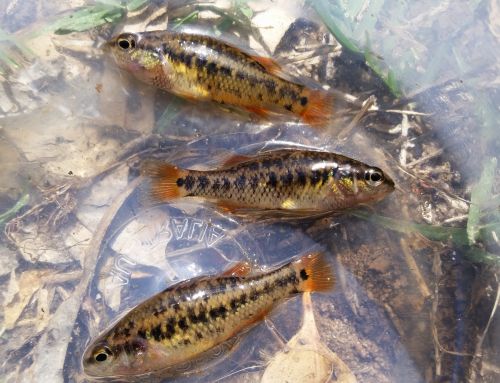 Fisheries Victoria to liaise with local angling groups to ensure predation by Trout and other non-indigenous fish is understood as an issue of concern and that this be taken into account in when considering stocking.

Reassess fire protection activities in the catchment to ensure harvesting or burning programs do not have a negative impact on the habitat of this species.

Forestry operations:  Continue to plan softwood and hardwood logging activities in accordance with the Forest Code of Practice to avoid threats to fish populations

Establish an Environmental Overlay in Municipal Planning Schemes to prevent inappropriate development or work in the sub-catchment which support Variegated Pygmy Perch.

The Glenelg Hopkins Waterway Strategy 2014-2022 builds on the old Glenelg-Hopkins River Health Strategy Overview 2004-2009.  This document included several areas relevant to Variegated Pygmy Perch conservation.  Mid Glenelg G3, G8, Crawford River, Glenaulin Creek, and the mainstem of the Glenelg River. Lower Wannan G9 and Grange Burn G13 sub-catchments as being important stream reaches for conservation of the Variegated Pygmy Perch.  A significant amount of work has been undertaken in these priority area by the GHCMA, community groups, landholders and the timber plantation industry. 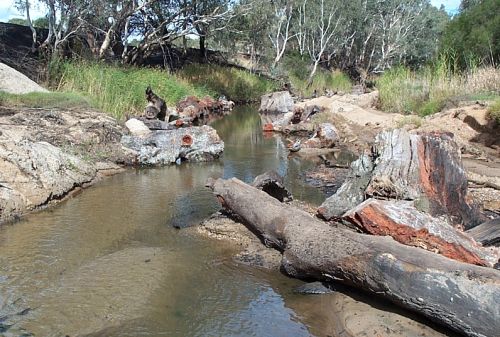 Instream habitat works on the Glenelg River, including the reinstatement of pools and microhabitat using logs secured into the river bed and banks. These features provide feeding and refuge areas for Variegated Pygmy Perch. Source: Stephen Ryan GHCMA.

Importantly there has been 150% increase in Variegated Pygmy Perch in the Glenelg system. GHCMA (Glenelg River Restoration project).

Livestock have been excluded from over 50% of the Crawford River waterway frontage.

Three barriers to fish passage on the lower Crawford River have been removed.

Environmental flows from Rocklands Reservoir have played an important role in increasing connectivity and maintaining habitat availability for Variegated Pygmy Perch in the Glenelg River since 2011. These conditions have allowed populations to recover, increasing in their abundance and spatial distribution in the Glenelg River. 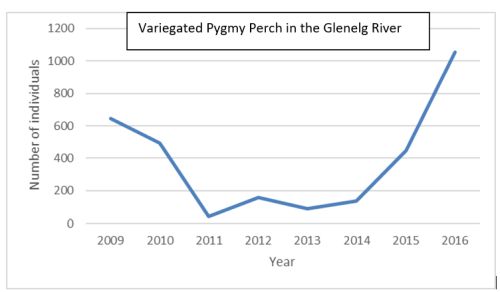 It should be noted the population decrease from 2009-2011 was most likely caused by drought conditions which reduced the river to a chain of pools. During this time, there was no evidence of recruitment recorded.

Hancock Victorian Plantation P/L have pulled back pine plantations from the creek frontage of Glenaulin Creek, effectively creating streamside reserves and carrying out revegetation of riparian zones. Over 8000 trees have been planted adjacent to the creek which has resulted in improvements to streamside protection and instream habitat for the Variegated Pygmy Perch.

Greening Australia have also had some significant projects along the Crawford River in partnership with Integrated Tree Cropping Ltd., regarding revegetation of the Kangaroo Creek and other sites in the upper Crawford River. Removal of stock from instream and streamside habitat combined with strategic revegetation to complement remnant vegetation and wetlands will assist in enhancing water quality and habitat for the Variegated Pygmy Perch.