The Wimmera Rice-flower Pimelea spinescens subsp. pubiflora is a small shrub 5-50cm tall which occurs on Buloke grasslands in the Wimmera region of Victoria.  Until recently it was presumed to be extinct having last been recorded from the Dimboola and Borung districts in 1901 however, rediscovery of this species occurred in Spring 2005 when a population was discovered on a roadside in the Natimuk area. Another population was also discovered in the Township of Minyip on Crown Land in 2007.

The two remaining populations are about 30 km apart and despite numerous searches based on old Herbarium records no further populations have been discovered to date.

There are two related sub-species of Pimelea spinescens both considered Critically Endangered and Listed under the Commonwealth EPBC Act 1999 and Victorian FFG Act 1988):

The leaves are oval shaped and are generally no bigger than 10 mm long x 3 mm wide. In contrast to most other grassland species, Wimmera Rice-flower typically blooms in mid winter. Between April and August, small creamy yellow flowers bloom profusely amongst the green leaves. As Wimmera Rice-flower blooms during the winter months, it is easy to spot amongst its surrounding vegetation.

During the summer months, the green or grey-green foliage may fade slightly or partially die back depending on the rainfall. However, the small green shrub can still be seen amongst the drier grasses and weed species. 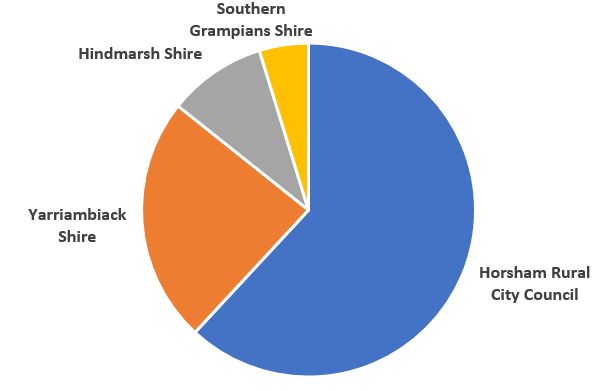 Key Local Government Areas for Wimmera Rice-flower based on the number of known records from each LGA. (Note: records in Southern Grampians Shire and Hindmarsh Shire are old Herbarium records). Data source: ALA 2017.

Both locations contain Buloke Trees Allocasaurina leuhmannii, many Wimmera Rice-flower plants are found at the base of these trees.

The Wimmera Rice-flower is thought to be slow growing and long-lived with plants reaching ages of up to 100 years (Mueck 2000).

Flowering occurs in mid-winter (April - August), in contrast to most other grassland species, with a profusion of small creamy yellow flowers. 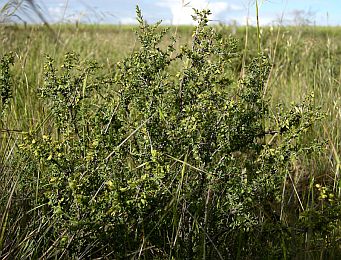 Recovery work on this species begun in 2005 following its rediscovery. Meetings with key land managers were held on site to discuss the short and long-term management requirements for the population.  These have included neighbouring landholders, and representatives from the Department of Environment, Land, Water & Planning (DELWP), Royal Botanic Gardens Melbourne, Parks Victoria, local Shire, Country Fire Authority, and the Australian Native Plants Society.

Other actions which have been implemented by DELWP include searching for new populations, identifying potential habitat, liaison with stakeholders, propagation of plants, establishment of a seed bank collection and monitoring to increase understanding of the species.  These will eventually form part of the Recovery Plan.

The Natimuk site in particular is also a good example of remnant grassland vegetation. Having survived the clearing and degradation that has occurred on many other roadsides, is a great example of how important it is to protect remaining native vegetation.

The Wimmera Rice-flower recovery project became part of the Wimmera Threatened Flora Project, which was funded federally by Natural Heritage Trust via the Wimmera Catchment Authority.

Since rediscovery of Wimmera Rice-flower in 2005 the known populations have been surveyed every year to check their health and identify any threats.  (Between 2009 to 2010 monitoring of the five 1 x 1 m quadrates at the Natimuk population didn’t detect any germinants and showed a small loss of 5 plants).

Surveys of surrounding roadsides and other potentially suitable areas have been conducted every year between 2006 to 2017, however no new populations have been discovered.

Since 2005, seed has been collected on a regular basis from both populations to facilitate propagation of plants for reintroduction.

Trials of in-situ germination from seeds has been trialled with limited success. Results indicate successful germination may not occur in the first 2-3 years. This species seems to be very reliant on successive good years of autumn rainfall for good seed germination and survival.

The Royal Botanic Gardens completed a genetic diversity study in 2013.

The possibility of undertaking a strategic burn through part of Natimuk population has been looked at as a method of weed control and stimulus to seedling germination. Further consideration is required by recovery partners.

An autumn ecological burn was conducted at the Minyip site in Autumn 2009 to try and reduce wild oats. Pimelea was recorded re-sprouting following the burn. A seed trial using a variety of treatments was conducted to investigate the effectiveness of the 2009 ecological burn in germinating seed. There was no positive germinants observed from this trial.

In 2011, a Community Action Grant for $18,700 was used by the Minyip Committee of Management to control weeds and begin a Grassy Groundcover Project.

Signs have been installed at both sites to increase awareness of the need to keep vehicles and machinery out of the areas. Bollards were erected to restrict vehicles / tractors entering the Natimuk roadside site.