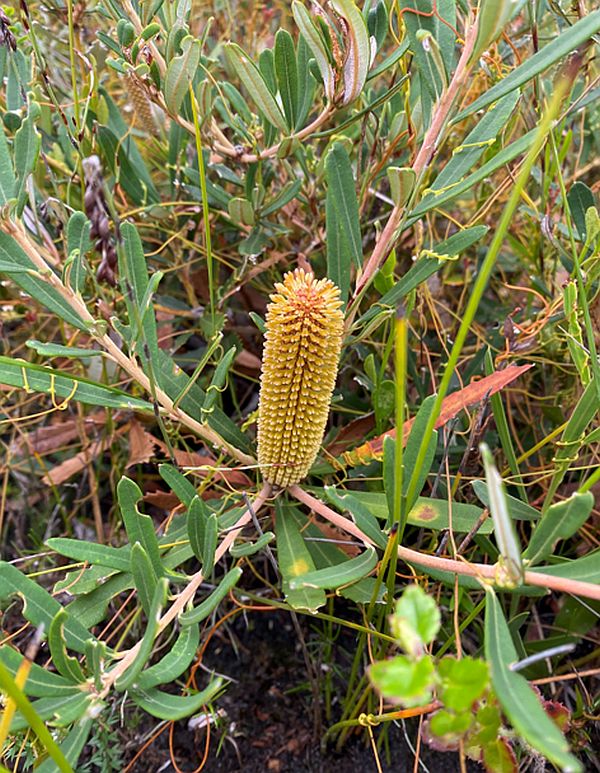 East Gippsland, Victoria, is unique in terms of its natural environments and biodiversity. Approximately three quarters of the land area comprises national parks and other public land reserves, and there are 125 species that rely on East Gippsland for 50-100% of their recorded range. Thirty percent of these species occur nowhere else on Earth.

Despite the importance of East Gippsland for biodiversity, surprisingly little environmental research has been undertaken in support of on-ground efforts to conserve, maintain and restore species and ecosystems in the region. Over 100 plant species in East Gippsland are listed as vulnerable or endangered at the national- or state-level, while the status of a further 90 remains uncertain. Many of these plants exist as small and/or localised populations and, for a great majority, their known distributions were severely burnt in the 2019/20 bushfires.

Together, Envite Environment, La Trobe University, the Friends of Mallacoota and partners have embarked on an initiative to secure the future of East Gippsland’s threatened flora through:

Facilitating the conservation of Banksia croajingolensis

The Gippsland Banksia (Banksia croajingolensis) is known only from a single drainage line South of Shipwreck Creek in the Croajingolong National Park, a site that was severely burnt in the 2019/2020 megafires. Very little is known about the biology of B. croajingolensis. There is even a question about its origin, with Flora of Victoria suggesting that it may be a hybrid between other species with which it co-occurs. We are undertaking surveys to assess the post-bushfire response of B. croajingolensis, combining this with genomic assessment of diversity and structure of resprouting and emerging plants.

The genomic uniqueness of the species will also be assessed relative to putative parental taxa (B. marginata and B. integrifolia), along with another taxon that is thought to be closely related (B. paludosa).  These genomic outcomes will lead to practical management recommendations including, for example, ex situ collections. In this space, propagation of seed and cuttings by the Friends of Mallacoota is underway to serve as an insurance population in case of future environmental catastrophes.

In October 2021, we surveyed the wild population of B.croajingolensis along two drainage lines either side of Shipwreck Creek, Croajingolong National Park, where the species was reported to occur. We counted 158 stems, which is substantially fewer than the 480 plants observed in the mid-90s (Molyneux 1995). Our output maps clearly show the entire known distribution of this species, which we now believe to be restricted to a single drainage line south of Shipwreck Creek. Besides some evidence of insect herbivory, wild plants seemed to be faring ok since the fires, with high incidence of new leaf growth from burned stems and flowering observed on two occasions. All plants found were resprouting with no newly emerging seedlings observed. Surveyed plants were tagged and leaf samples collected from 90 stems for genomic analysis. Representative herbarium specimens were collected for the La Trobe University Herbarium and will be made publicly available via the Australasian Virtual Herbarium.

The Betka Bottlebrush (Callistemon kenmorrisonii) is one of a handful of rare and endemic callistemons restricted to Far East Gippsland. C. kenmorrisonii is only known from two small populations growing on granite rock bars along the upper Betka River, one where the river intersects Stony Peak Road and one at Roger Track, in Wingan State Forest. Both populations were severely burned in the 2019/2020 Black Summer Bushfires, and have since also been impacted by numerous flooding events following abnormally high rainfall in the years following the fires. There are unanswered questions as to the origin of C. kenmorrisonii, with suggestions that the species may be a hybrid swarm involving C. citrinus and C. subulatus. The genomic analysis component of this work aims to help resolve this hybrid hypothesis, and to provide additional information to guide and inform management actions for C. kenmorrisonii.

In October 2021, we surveyed the two known wild populations of C.kenmorrisonii. A total of 93 surviving plants were recorded in situ, including 37 at the Stony Peak site and 56 at Roger Track. Individual plants were mapped, tagged and leaf samples were collected for genomic analysis from all plants. Herbarium specimens were also collected. We observed this species flowering on one occasion following the 2019/20 bushfires, with burned plants seeming to be recovering well through resprouting. No newly emerging seedlings were observed.

In Victoria, Spyridium cinereum is known to occur as two disjunct populations, one located in the Grampians National Park in the western part of the state and one in Mallacoota in Far East Gippsland. Prior to the 2019/20 Black Summer Bushfires, in Far East Gippsland, S. cinereum was described as rare but locally common in areas that had a higher frequency of disturbance (primarily slashing). All known S. cinereum in the region were severely burnt in the fires. Our aims through this work were to understand: (a) how the species is faring post-bushfires, and (b) how genomically diverse and distinct are the two Victorian populations.

In January – April 2022, detailed surveys of Far East Gippsland populations of S. cinereum were undertaken and leaf samples collected for genomic diversity analysis. Leaf samples for genomic analysis were also collected from the disjunct population of S. cinereum in the Grampians National Park in December 2021. Far East Gippsland surveys revealed the species to be regenerating prolifically between Bastion Point and Shipwreck Creek post the 2019/20 Black Summer Bushfires, including in areas where it was not previously recorded. S. cinereum was the dominant groundcover species at many of these sites, where it was observed growing in high densities of up to 10 individual plants per square meter. All plants appeared to have regenerated from seed and, by March 2022, were producing seed of their own.

Bolwarra, or Native Guava, (Eupomatia laurina) is a rare rainforest plant that is restricted to warm-temperate rainforest and moist places within more open forest, eastwards from Nowa Nowa in Victoria all the way up into QLD. Prior to the 2019/20 Black Summer Bushfires in East Gippsland, the species was threatened primarily by deer. However, these fires impacted many ecological communities that would not normally burn, including warm-temperate rainforest. The aims of this project were to survey fire-impacted warm-temperate rainforest for E. laurina, record the species’ presence and post-fire status, collect material for genomic analysis and to undertake work to support the species’ recovery on the ground.

In Victoria, Mirbelia rubiifolia is represented by a single population in Far East Gippsland, along the Heathland Walking Track and Old Coast Road north of Shipwreck Creek. Before the 2019/20 Black Summer Bushfires, M. rubiifolia was known to occur on and along track edges in this locality. The area was severely burnt in the fires and it was unclear how the species would recover. Our aims were to assess the post-bushfire status and genomics of the small, isolated Victorian population of M. rubiifolia.

In November 2021, we mapped and collected leaf samples from surviving M. rubiifolia plants in Far East Gippsland. Our observations indicate that the species has responded well to the 2019/20 fires. A total of 196 points have been surveyed to date (all plants within 2 m counted) for this species and many more seedlings have been observed growing further into the heathlands. Along the track, multiple large M. rubiifolia were observed flowering and producing seed. Working with the land manager in the area, Parks Victoria, we advised on an altered slashing regime which has been implemented to help M. rubiifolia to continue to recover at the site.

Location: Scattered across low East Gippsland from the Fairy Dell rainforest near Bruthen in the West to the Howe Range in the East.

Timing/duration: Previously funded by the Australian government via Landcare Australia (2020/21) Currently funded until Dec 2022 by the Ross Trust and seeking funding through to 2024/25.

Using a partnership-based delivery model the project seeks to build our overall understanding of the species current distribution/abundance and degree of genetic relatedness. With a view to providing post fire recovery management advice on surrounding land use, threat management interventions (weeds/deer) with possible translocation and insurance populations to maximise species persistence. Original records date back to the early 1970, but little is known of this fire sensitive and somewhat cryptic species current distribution post fire. If and where its survived.