This video conference was supported through resources and technology provided by the Department of Environment, Land, Water and Planning, Victoria. SWIFFT wishes to thank speakers for their time and delivery of presentations.

The first video conference for 2015 had a theme on Native Freshwater Fish.

Lauren introduced the topic by explaining the areas of south-eastern South Australia and south-west Victoria once comprised a vast wetland complex.  Since European settlement  there has been extensive drainage, land clearance and conversion to agricultural production with about a 90% loss of wetlands in south-east South Australia and a 60% loss in south-west Victoria. Some of the remaining freshwater coastal wetlands and streams are biodiversity hot spots containing nationally listed fish species such as the Yarra Pygmy Perch, Variegated Pygmy Perch and the Glenelg Spiny Crayfish.

Lauren explained the term karst refers to streams and wetlands that are supplied from groundwater as it pushes up through the limestone. 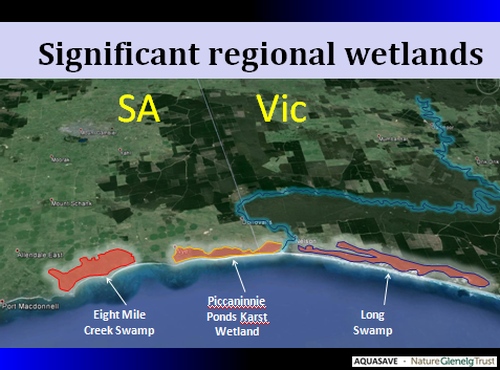 The Eight Mike Creek complex is comprised of a series of large deep pools which contain rich aquatic plant life. The system is connected to the sea by streams which have suffered a significant loss of riparian vegetation. 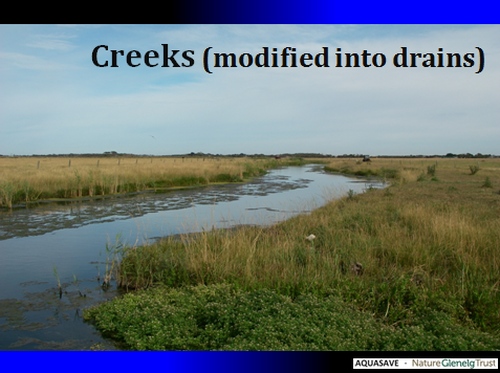 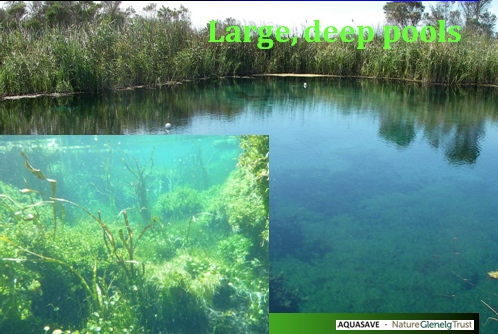 The swamp is considered critically endangered habitat  but there has been a decline in  threatened species.

Due to the low sea level of the wetlands any long-term, sea level rise poses the greatest risk to the system.

This wetland complex comprises three main areas; the main ponds, the eastern wetland and pick swamp to the west of the main ponds.

The area contains a number of rising springs with the main ponds having a depth up to 110 metres. The system is connected to the sea by two streams.

The eastern wetland had restoration works carried out in 2013 to reinstate a levee holding water for the swamp which has resulted in a significant expansion of wetland habitat. Lauren spoke about the increased distribution and abundance of Southern Pygmy Perch and Common Galaxias in response to wetland enhancements and improved connectivity with the sea through connections with the Glenelg estuary.

Piccaninnie Ponds now supports a diversity of habitats and a diverse fish community with 17 fish species; two are nationally threatened (Dwarf Galaxias and Yarra Pygmy perch). There are no records of introduced species at this site. Yarra Pygmy Perch have only been found in one spring. Monitoring over the past five years has found a severe decline in Yarra Pygmy Perch to the point where it is considered close to extinction at this site.

A special translocation project has been established to reintroduce Yarra Pygmy Perch into Pick Swamp. This project involves captive breeding in an aquaculture facility and release through involvement of schools at Millicent High School and Kingston Community School. 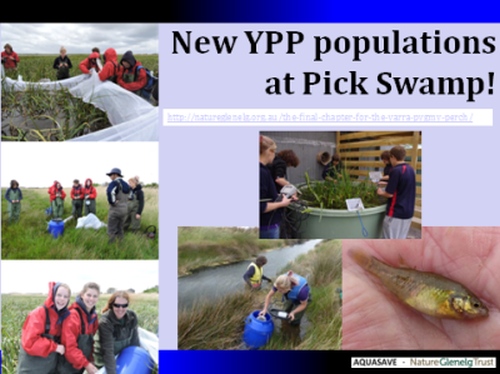 Results from monitoring indicate the fish are progressing well at Pick Swamp which means the project has successfully established a new population at Piccaninnie Ponds.

Lauren spoke about restoration works which involved blocking off drains which were created in the 1950's. This has enabled the water levels to rise,  expand the swamp area and increase connectivity throughout the swamp. Baseline monitoring was conducted in 2014 with follow up surveys planned for 2015.  Long Swamp supports a diverse range of fish species from freshwater to estuarine species. 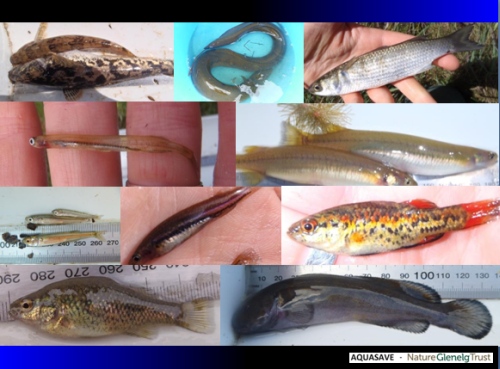 Zeb provided an overview of Macquarie Perch Macquaria australasica which is a medium sized freshwater fish (up to 465 mm) endemic to the Murray Darling Basin and a couple of populations on the eastern seaboard. It is a historically dominant species in the mid-upper reaches of streams north of the Great Dividing Range in  Victoria and forms an important recreational fishery. 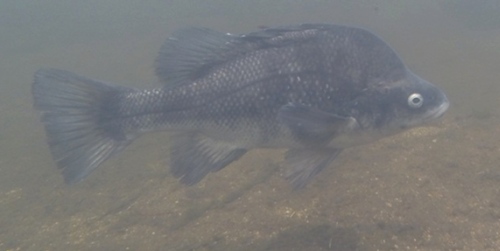 Distribution and status of Macquarie Perch

Listed as endangered under the EPBC Act 1999 and the Victorian FFG Act 1988.

There are eleven highly fragmented “populations” in Victoria with many populations in sub-optimal habitat which places their future in doubt. 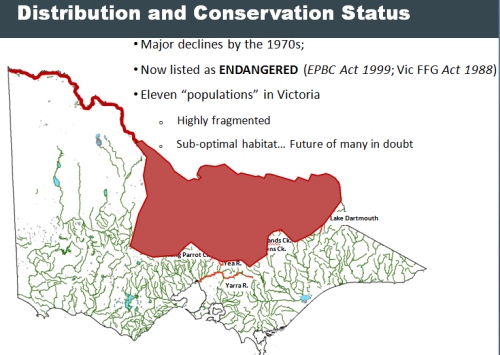 Macquarie Perch is primarily a riverine species but can establish populations in suitable lakes where fish undergo migrations to riverine habitats in Spring. Lake Eildon and Lake Dartmouth are important impoundments which have been the focus of research into this species.

Spawning habitat comprises pool / riffle sequences  where eggs are deposited at the base pools and are washed into riffle areas where they lodge in the substrate.

Connectivity of habitat for migration of adults and dispersal of juveniles from spawning sites requires areas of habitat and refuge pools with adequate depth. Boulders,  instream wood and an intact riparian zone of native vegetation are important.

Macquarie Perch is a long-lived species recorded up to 26 yrs of age (growing to 420 mm TL). Diet comprises aquatic and terrestrial invertebrates. It is a generalist schooling species which can form dense aggregations for several months during the spawning season. Peak spawning occurs in November when temperatures are above 16 °C.  There are a number of known key spawning sites where dense aggregations occur. The King Parrot Creek and the Yarra River have been studied during the spawning season.

Construction of dams and weirs which act as a blockage to fish migration has been a major factor in this species decline. In addition, discharge from dams often results in cold water pollution which nullify spawning condition.  Dams also prevent connectivity and dislocate populations above and below dams.

Heavy fishing pressure at aggregation sites meant Macquarie Perch were easily taken.  Zeb referred to a quote from Cadwallader & Rogan 1977.  “In 1959 and 1960, the Macquarie perch migration coincided with the opening of the angling season. The total catch from the Jamieson and Goulburn Rivers during the opening week of each season was estimated to be 2 – 3 ton of fish”

Objectives are focused on preservation of remaining populations, however it is highly likely that some  marginal populations will crash particularly in light of climate change projections.  Zeb emphasised it is very important to preserve as many of the current populations as possible while also undertaking  long term solutions with objectives focussed on increasing population resilience through:

This plan recognises the highly fragmented populations of  Macquarie Perch in the Goulburn - Broken Rivers system with a key objective of increasing the resilience of several populations by expanding populations downstream into Goulburn River and Lake Eildon through improving connectivity between  Hughes Creek, King Parrot Creek and Yea River.

Catchment managers from the GBCMA, engineers, geomorphologists, hydrologists, ecologists and landholder / local community have worked together to investigate and formulate means of improving connectivity.

This project is aiming to create a new self-sustaining population of Macquarie Perch in the Ovens River. The Ovens River once supported an abundant population of Macquarie Perch which had become locally extinct. The project proceed on the basis that the river is large, unregulated with good connectivity and habitat. The project is also supported by the North East Catchment Management Authority works programs and has good levels of community support.

Zeb spoke about the Lake Dartmouth population which had been in decline.  Monitoring since 2008 indicates the population has been reinvigorated as the lake has begun to fill. This presented a good opportunity to build a new population in the Ovens River.

The recovery of Macquarie Perch is difficult with a long road to recovery - a sustained effort by water and resource managers together with community support is needed.

Education is vital to achieve short and long term objectives.

Murray Hardyhead Craterocephalus fluviatilis are a small silvery fish growing to about 8cm. They tend to form schools are often referred to as minnows along with other small bodies species. They can be sometimes confused with the Unspecked Hardyhead which is similar in appearance and more common. 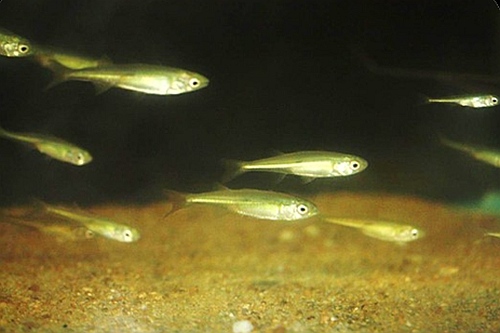 Iain said the species has suffered a severe decline in recent years. In 2000 there were approximately 17 populations by 2014 only 5 populations remained. This decline was attributed to the drought and there are grave concerns for the species when the next drought occurs.

Historically, Murray Hardyhead would have been a flood dispersing species where they would have survived on the fringes of the flood plain in isolated wetland systems that became salty. During a flood these systems would have reconnected allowing dispersal.

Most records come from salty lakes, irrigation basins, creeks, rivers and drainage channels with salinity up to 110,000EC in areas containing submerged vegetation e.g. Ruppia  Sea tassel . The Murray Hardyhead has not been recorded from the main part of the Murray River for a long time.

Iain said the Murray Hardyhead is distributed in the Murray, Darling and Murrumbidgee  rivers with the main stronghold being sections of the Murray River from Kerang to Swan Hill and down the Murray to the lower lakes.  The species has not been recorded very far up the Darling River (if at all) and not far up the Murrumbidgee with no recent verified records.  Populations in the Murray have become isolated with four genetically distinct management units. 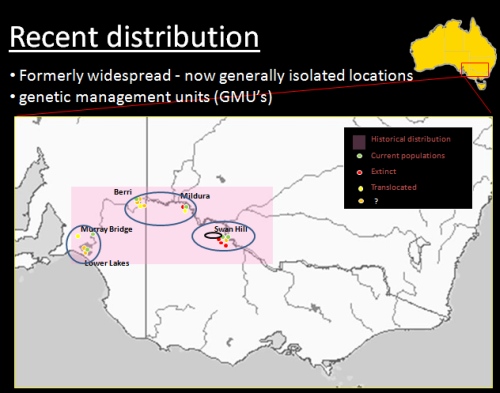 Iain spoke about a number of threats which become interrelated and basically revolve around changes to natural river flows.  Lack of regular flows with sufficient enough volume to reconnect fringing wetlands on the Murray floodplain with the main river is a major problem, this impacts on availability of habitat, connectivity and reproduction.  Weirs are barriers which impeed dispersal, they can also permanently alter fringing wetlands upstream of the weir by reducing salinity which favours introduced  species which are normally excluded in more saline wetlands.  In these environments introduced species  such as carp, redfin and mosquito fish Gambusia can easily out compete the Murray Hardyhead.

Iain said he has been studying the Murray Hardyhead since 2004, he is also aware of some earlier work by ARI in the Kerang area. There is also some monitoring being conducted in the lower Murray lakes by Nick Whiterod.

Murray Hardyhead are a short lived species less than two years old. They are regarded as an annual species which needs to reproduce each year for the population to persist. 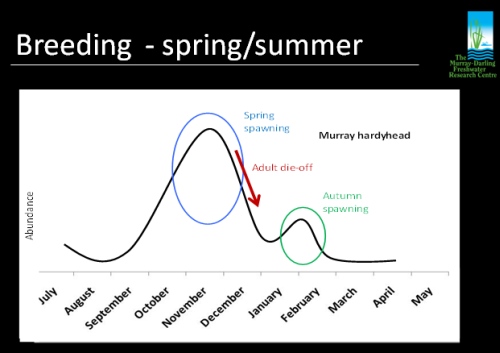 Breeding takes place during Spring/Summer, eggs are sticky and deposited on aquatic vegetation such as Rupia,  peak hatching takes place in November.  After spawning during December and January many of the adults die off and the population  declines. When conditions are ideal there can be a second Autumn spawning from the previous November spawning.

There is a current recovery plan for Murray Hardyhead which has been recently revised and is in the approvals process. The plan is essentially aimed at improving the status of Murray Hardyhead by preserving the known populations and increasing its areas of occupancy.

The recovery plan does not guarantee funding for the necessary actions and because the Murray Hardyhead is such a short lived species there is a high risk of dramatic population decline occurring while implementation of the recovery process is being sorted out.

Iain spoke about the difficulties of managing Murray Hardyhead populations which have multiple management agencies. Confusion over who is responsible and the approvals process can be long  meanwhile the population can be gone.

A post drought 'dis-urgency' has emerged as an issue where people are not mindful of the ongoing threats to the Murray Hardyhead, whereas during the drought more attention was given to maintaining key wetlands.

The recovery of Murray Hardyhead is aimed at getting this species off the threatened list, however even though the drought has passed and there has been more water about the species is still in rapid decline.

Iain said we need to be pro-active by looking at recovery across the range of the fish to improve natural dispersal rather than just keeping a few pockets of fish alive until the next drought when there will be a high chance of losing them.

Iain acknowledged relevant organisations and the dedication of people who have worked and volunteered their time towards conservation of the Murray Hardyhead. 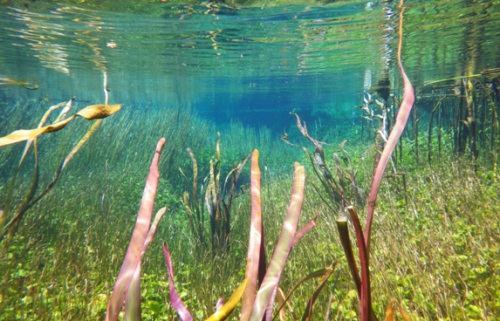 Agenda for the next SWIFFT video conference