Now you see us

The Alphabet Bird Project, is an environmental art initiative, for year four students from across Geelong, to create art works that feature 26 waterway and wetland birds threatened in the Geelong Region.

A selection of these artworks will be displayed during the Geelong Nature Forum from 28 March to 3 April 2020 at the National Wool Museum (NWM) Geelong.

More about the Alphabet Bird Project

Jane Burns’ new body of work 'Listed' presents harrowing imagery of endangered Australian species in a state of disappearance as a part of ART + CLIMATE = CHANGE 2019.

Jane is an artist, educator and environmentalist. She holds a bachelor degree in Sculpture and post graduate certificate from the Victorian College of the Arts. Over thirty years, she has worked in a variety of media including photography, printmedia, textiles, installation and homeware designs. She has exhibited in leading independent galleries and craft outlets in Melbourne, Australia and received support from state and national arts funding bodies.

As an artist she is interested in exploring ways to communicate the rapid change on climate systems and on nature.  At a time when extreme weather threatens our health, food and water security and life on Earth - Jane asks the question, why was talking about the weather ever deemed as ‘small talk’?.

Australia is facing an extinction crisis. We already have the worst extinction rate in the world for mammals, and other groups of animals are not far behind.

In south-eastern Australia, more than 25 animal species are teetering on the brink of extinction due to habitat loss, feral animals, landscape fragmentation, disease and climate change. Amongst these is the iconic Tasmanian Devil, and Victoria’s animal and bird emblems, the Leadbeater’s Possum and the Helmeted Honeyeater respectively. These are local species, from tiny frogs to wallabies, and each animal regardless of their shape, colour and size deserves nothing less than a secure future.

The art work was largely inspired by Zoos Victoria who are committed to fighting extinction with captive breeding and recovery programs to secure the survival of these priority species before it is too late. 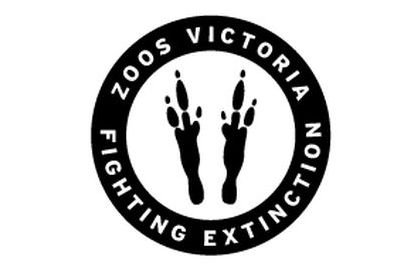 Such as the Orange-bellied Parrot, Australia’s most endangered bird species with an estimated fewer than 50 left in the wild. These small birds annually migrate across Bass Strait from their breeding site in remote south-western Tasmania to the south-eastern coast of the mainland. Crucial to the survival of this species is the protection and expansion of habitat on known feeding sites and captive breeding programs for reintroduction into the wild. Such conservation programs, research projects and community conservation campaigns are at the frontline of trying to prevent animals such as the Orange-bellied Parrot to disappear altogether.

The work shows animal subjects in a state of disappearance. The weft threads of linen fabric are pulled away, leaving a ghost on the remaining warp threads. Up close, the image fragments into the form and texture of line and ink, unspooled from my fingers.

Public Art project based on the 84 species of threatened birds in the City of Greater Geelong. Now You See Us

Mary-Jane wanted to highlight the scale of this threat by focusing on just the birds, in the first instance, creating a large murmuration of sculptural birds based on the 84 species affected.  This would be made by a collective of selected local artists and would be displayed in a public place with the birds both standing and in flight depending on the species for maximum impact.

In preparation of this work Mary-Jane began creating the sculptural birds using new and recycled paper. The first bird created is the first on the list, the Australasian Bittern, an endangered species rarely seen by people.

New additions to Now You See Us

The Now You See Us project is going to be on exhibition at The National Wool Museum, Geelong from February 15 2020. Mary-Jane’s studio is moving into the museum for three months as part of as artist in residence program, allowing the public to join in the making of the birds. The importance of highlighting the plight of our threatened species has never more urgent.

As artist in residence at The Geelong College in 2016 for Arts Week, Mary-Jane created in conjunction with the senior students a large installation of 2D and 3D birds in a murmuration.

Mary-Jane Walker is both a scientist and an artist.  She has a doctorate in Molecular Genetics from the University of Edinburgh and graduated in art from RMIT University.

She worked at the London Design Centre and is on the Curatorial Team for the Geelong Design Week program 2020, as part of Geelong’s role as a UNESCO City of Design. She is also on the Audience and Engagement Committee of the Geelong Gallery.

Mary-Jane is the founder and director of The School of Lost Arts in Geelong, a workshop and event space for art, creativity and sustainable living.

Mary-Jane has exhibited extensively in Melbourne and Victoria and has three times been a finalist in the Australian Contemporary Textile Award as well as the Art for the Environment exhibition.  Her work has also toured Europe as part of an International Climate Change Exhibition and is held by private collectors in England, Canada and Australia.

More information: Now You See Us

This project involves art as a means of raising awareness of Australia and New Zealand as the major destination for migratory shorebirds of the East Asian-Australasian Flyway, as they spend the greatest single portion of their migratory cycle on our shores (Sept./Oct. – April/May).

The project invites artists to seek out their local habitat and document their personal response to it, making it visible to others and create an intricate and personal map of our precious shorebird habitat.

How to be involved

View more of the prints on project's website ‘The Overwintering Project’

Most Australians live in the larger cities and get only glimpses of the natural world on TV. Conservation issues rarely enter their lives or their children's lives. Even educated people in cities seem to view species conservation as a rural concern.

We see ourselves as separate from the rest of nature yet we cannot exist without it. Science requires logic, repeatable testing of theory and hard data, but it's not really designed to communicate or convince. The arts however play with emotion and feeling and can be simultaneously entertaining and persuasive. Art can provide a spring-board to expanding interest in species/ecosystem conservation. 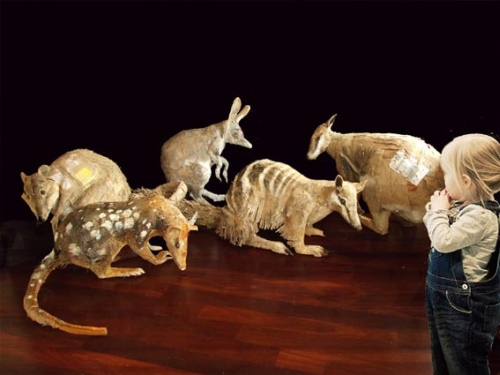 This sculpture project attempts to spotlight marsupial species threatened with extinction due to introduced predator impact and habitat loss, but also references the inherent threat human ‘requirements’ pose to their continued existence. 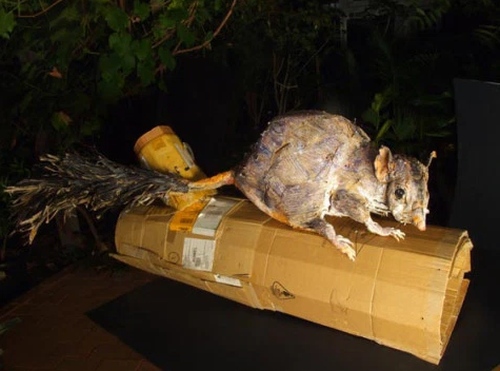 ARTEFACT is a collective of scientists and artists that are dedicated to exploring new ways of communicating conservation science.

By bringing together the creative imaginations of artists with the logical reasoning of scientists, we work to create a bridge for people to learn about conservation.

The Beeac Brolga Pathways project is a partnership between the students and staff at Beeac Primary, plus environmrental artist Peter Day. The project also has input from Inca Veltheim (Brolga PhD researcher).

Peter introduced art to the students via sculptural pieces using natural materials such as bark, grasses and paperbark where students could weave over wire frames of brolgas, creating life size art works. Other art activities included screens of brolgas placed into the landscape as well as brolga crossing road signs placed on local roads.