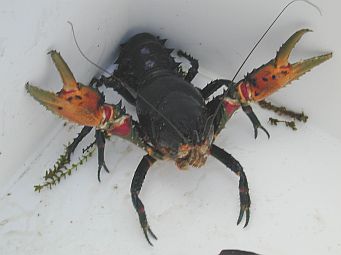 This SWIFFT seminar was conducted online via Microsoft Teams (87 participants).  SWIFFT wishes to acknowledge support from the Department of Environment, Land, Water and Planning, Victoria in organising the seminar and thank speakers for their time and delivery of presentations. Thanks to Michelle Butler who chaired the session from Ballarat and acknowledged the Elder’s past and present on the lands covered by the meeting.

Waterbugs, why I study them and how you could too

Waterbugs, why I study them and how you could too

John presented from Margate in Tasmania. He introduced the National Waterbug Blitz which started as a means of providing people with an understanding about the more readily observable waterbugs in waterways.

John spoke about what sparked his interest in waterbugs, especially the incredible diversity of waterbugs which can be found by simply dipping a net into a river.

John pointed out that his interests have spanned the animals themselves, ways of telling the animals apart, the taxonomy, how they can be used in ecological assessments and ways of communicating and educating people in the science associated with waterbugs.

Water Tiger (Dytiscidae) larva have an ability to use their antennae to detect movement and chemical gradients in the water. In this video, powerful mandibles are used to grab the prey (in this case a tadpole) digestive enzymes are then pumped into the prey to form a fluid mix which can be sucked out for feeding. John pointed out that the Water Tiger is an air breather so it has developed an ability to breathe through one end of its body at the surface whilst it feeds with its head being submerged.

The study of waterbugs can reveal a whole new world of life in our waterways which is easily accessible to anyone with a dip net.

Waterbugs as an indicator of river health

Scientists have been measuring the abundance and occurrence of various species of waterbugs as an indicator of waterway health for many years. The National Waterbug Blitz has been used as a means of undertaking citizen science collection and assessment of waterbugs at historic sampling sites. New information can be used to determine changes to waterway health which have occurred over time within the environment.

The National Waterbug Blitz is a citizen science project, covering the whole of Australia. It uses waterbugs to assess waterbodies, just like Waterwatch / Streamwatch / Rivers of Blue etc. but with a focus on waterbugs.

The level of National Waterbug Blitz activity tends to be related to funding and alignment with funded waterway projects. A recent partnership with Federation University, Centre for eResearch and Digital Innovation (CerDI) resulted in creation of a database from which mapping of sites could be undertaken right across Australia.

John spoke about development of the Waterbug app which has been undertaken on a very limited budget. The app is a key means of identifying waterbugs. The app can also be used as an ecological assessment tool.

The Waterbug app has been developed to apply taxonomic keys which can be used in the field on live animals. The app also has a feature called ‘Speedbug’ which uses silhouettes of waterbugs to assist in identification in a short timeframe. Using the app also helps to showcases the diversity of waterbugs within a waterway.

John discussed the concept of discarding taxonomic identification in the laboratory in favour of field identification.  Features of Agreed level taxonomy:

Three Families of Mayflies commonly found in Australia. All have 3 tails and short truncated body forms. If these specimens were dead in a petri dish preserved in ethanol, they look similar, but viewed live, their movement characteristics are quite distinctive which can be used for taxonomic identification using the app.

John spoke about how freshwater ecologists have built up an understanding of what waterbugs occur in degraded environments and which ones are found in high quality or more pristine environments.

The data portal contains datasets dating back 20 years as well as new information.

Using Citizen Science to undertake waterbug assessments, people can gain an understanding of waterway health which includes information for project design, works and monitoring the effectiveness of remedial actions. Waterbug assessments can also help to locate where changes in waterway health occur e.g., identifying where a healthy stream becomes a degraded stream so that threats can be identified.

John provided a number of examples of maps and how the SIGNALT scoring system can be used in better understanding waterway health and the contributing factors which degrade waterways.

John acknowledged the assistance and partnerships from people involved in the National Waterbug Blitz.

A documentary by John Gooderham ‘Build me a river’ learn about what makes up a river, the way humans change rivers and most of all learn about the waterbugs.

The coloured dots on the maps are an indication of human impacts on the environment; the red dots being degraded streams which can be the result of changes to the landscape e.g., remove vegetation – increases sediments flowing into rivers, agriculture – possibility of increased nutrients, land development and high density living – increased stormwater runoff and pollutants.

It is hard to separate one impact from another given in most cases there are multiple factors impacting on a waterway which act in unison e.g., increased sedimentation and reduced water quality goes with changes in the landscape. Although, it is possible to identify what proportion of impacts are contributing to a degraded waterway.

Waterbug surveys are traditionally done in Spring and Autumn but the National Waterbug Blitz is not confined to these seasons.

Quality control is carried out on Citizen Science data submitted via the app.

Deirdre acknowledged traditional custodians of the lands where she works - the Wadawurrung and Eastern Maar traditional owners and paid her respect to elder’s past, present and emerging.

Deirdre introduced her presentation by talking about waterway Citizen Science, what it means, the reasons people get involved and the role it can play in water quality monitoring programs such as Waterwatch and EstuaryWatch. With new biological assessments now available using eDNA citizen science projects can provide a snapshot of the distribution of cryptic freshwater critters that would otherwise be difficult to detect. These programs provide important long-term information about the condition of waterways.

At present there are 6922 waterway volunteers in Victoria, across 1019 sites. Within the Corangamite Catchment Management Authority (CCVMA) area there are 123 active volunteers at 197 sites in Waterwatch and EstuaryWatch programs.

Deirdre mentioned that in a recent survey of Corangamite CMA citizen scientists, most have an interest in partnering with Traditional Owners to understand the cultural value of water.

The goal of the Corangamite CMA’s Citizen Science program is to establish a connection between community members and with waterway and catchment management through community participation in engagement events and monitoring programs.

Waterwatch has been operating since 1993 with the help of citizen science volunteers across Victoria. It is a long-term water quality program which follows standardised methodologies set out in field manuals to ensure Waterwatch produces credible data of a known quality.

Data that is collected is loaded to the Waterwatch Vic data portal and can be viewed spatially across the State.

Clicking on a site will take you to the site overview where water quality data is summarized.

Information from the portal including graphs and statistics which can be downloaded.

EstuaryWatch has been operating in Victoria since 2006, monitoring estuary health. The EstuaryWatch program was established at the Corangamite CMA in 2006 in response to a groundswell of community interest and a lack of long-term data on the condition of Victoria’s estuaries. There are currently 11 estuaries monitored in the Corangamite region as part of EstuaryWatch.

Citizen scientists can investigate how healthy their local waterways and wetlands are, simply by exploring and identifying what waterbugs they contain. The type and numbers of waterbugs detected can be used as an indicator of waterway health.

Deirdre spoke about two apps that are used by citizen scientists to monitor platypus:

Deirdre spoke about a number of eDNA projects which are carried out by Landcare networks across the Corangamite region. Species monitored using eDNA include:

River detectives is an education initiative of Catchment Management Authorities inspiring teachers and students to understand, appreciate and care for their local waterway through engaging, cross-curricular, citizen-science activities.

Registered schools can fully utilize the website – enter their data and link up with other schools through billabong banter.

Deirdre thanked all the waterway environmental volunteers not only in Corangamite CMA but across all of Victoria who do an amazing job for our environment.

Due to time constrains questions were answered in the chat.

Shea welcomed everyone to Country as he presented live from Portland Bay. He introduced the session by talking about some of the traditional freshwater food resources and how considering both western science and cultural knowledge have contributed to the realisation that some traditional food species are currently threatened and require different consideration.

Shea discussed some of the main freshwater species used for food:

Shea & Jodie spoke about the work of Tarmo Raadik and his team from Arthur Rylah Institute, who rescued 30 mussels from the Crawford River as an insurance against the loss of the species due to a severe decline in water quality after the 2019/20 bushfires burned large areas the catchment.

Shea and Jodie presented information on the extent of the 2019-20 fires in Budj Bim which burned around Tae Rak (Lake Condah) and Killara/Gilgar (Darlots Creek). Gunditjmara fishsurveys were supported by DELWP funding under the Bushfire Recovery Program and by Tarmo Raadik from ARI. Surveys are conducted under DELWP requirements but are carried out in-house by Gunditjmara and informed by Gunditjmara values, knowledge & obligations.

As part of the fish and cray surveys it became apparent that there were periodic issues with water quality, particularly high nutrients and low dissolved oxygen in the water. These issues stem from catchment issues, so the project now includes water quality monitoring, looking at water quality from a catchment health perspective.

Continue Gunditjmara leading and undertaking the surveys, including:

Jodie and Shea noted that Nicky Hudson was also a key person in the work but was unable to be part of the presentation. They thanked the support and development of partnerships between GMTOAC, DELWP, ARI (particularly the involvement of Tarmo Raadik), Todd Walsh and the Glenelg Hopkins CMA; also the participation and support of Gunditjmara community members in developing surveys.