SWIFFT video conference notes are a summary of the video conference and not intended to be a definitive record of presentations made and issues discussed. Aboriginal and Torres Strait Islander's are warned that this page may contain images of deceased people.

This video conference was supported through resources and technology provided by the Department of Environment, Land, Water and Planning, Victoria. SWIFFT wishes to thank speakers for their time and delivery of presentations. Thanks to Craig Whiteford who chaired the session from Ballarat.

The fourth and final video conference for 2017 had a theme: Indigenous knowledge of ecology. 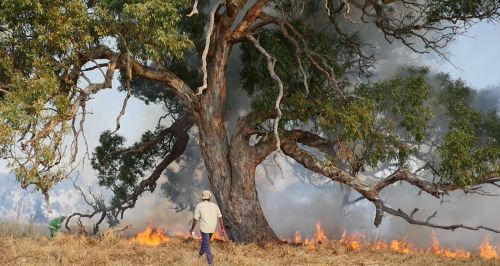 Apologies are extended to Trent for the technical difficulties which disrupted his presentation and prevented video and power point from being shown.

Trent spoke about the importance of traditional burning to his people. Training in traditional burning was undertaken at Wujal Wujal, Cape York. Practical training combined with local knowledge from Elders has enabled a return to Country which is an important part of the process. Burns have been conducted in the traditional way with monitoring of vegetation afterwards.

Trent explained, traditional burns are carried out not as a job but as a connection to heal Country, they are part of their community fellowship and are a very rewarding experience.

The traditional burning process has been an important means of getting Elders back on Country. Elders walk through Country before any burn, identifying sacred areas not to be burnt. A smoking ceremony is carried out to wake the spirits in the landscape. Burns are undertaken much slower and more hands on than typical agency type fuel reduction burns. The intent of traditional burns is to heal the landscape.

Video to be added soon

Traditional burning could be used in and around built up areas.

Future burns could be conducted across all seasons except mid-summer. The process is adapted for cooler months taking into account vegetation condition and fauna.

Species like the Brush-tailed Phascogale are monitored, ensuring patchy mosaic burns around trees with hollows to protect important nesting and shelter hollows.

Traditional burning is mainly done in partnership with Parks Victoria & DELWP at present with some CFA trials but into the future the Traditional burning approach could be used across all agencies involved in burning, particularly as it is a way of engaging with people.

Trial burning around wetlands is being looked at which also involves ensuring cultural heritage issues are taken into account.

Denis acknowledged the Traditional Owners present and past ancestors.

Denis is a project manager with the land Gunditj Mirring Traditional Owners Aboriginal Corporation located in south-west Victoria. Native title determination was granted in 2007 with Native Title rights on Crown Lands in the Budj Bim landscape. 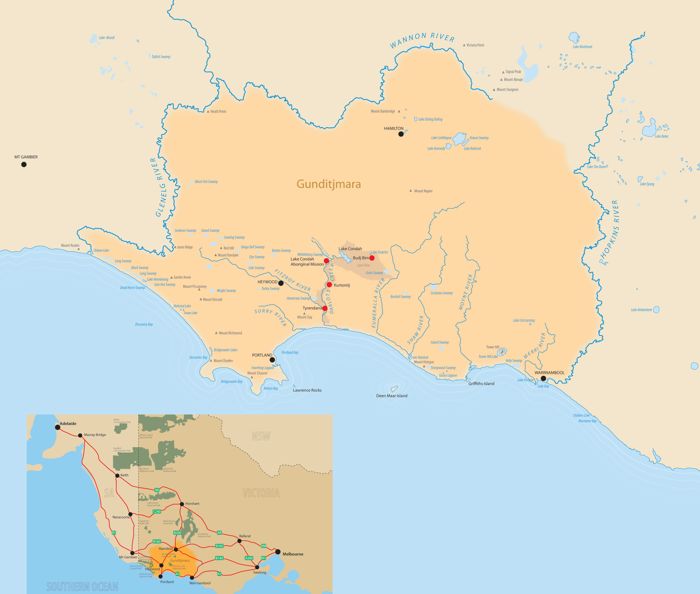 In 1984 the traditional owner group only had access and control of the Lake Condah Cemetery but after the Native Title determination in 2007 access to Country was achieved (the right to camp, hunt and take resources) on Crown Lands where Native Title had not been extinguished. Part of the determination stated ‘The Gunditjmara were able to prove their strong and unrelenting connection to this area where their ancestors farmed eels for food and trade at the time of European settlement and back through millennia’.

On 30 March 2008, one of the most important areas of Country, Lake Condah (Tarak) Land Title was handed back to the Gunditjmara.  Now there is also co-management of Mt Eccles National Park (to be renamed Budj Bim National Park). A number of properties have also been purchased under the Indigenous Land Corporation land acquisition program. 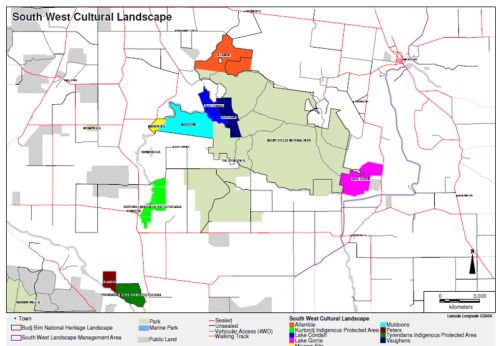 The Gunditj Mirring Master Plan provides guidance for how the areas are to be managed.

Denis spoke about a Word Heritage nomination for the Budj Bim Cultural Landscape which contains one of the oldest stone aquaculture systems in the World, over 6,600 years old. Lake Condah itself has over 80 fish trap systems around the lake. At present there are 10 indigenous rangers involved in management.

Cultural burning is being introduced to undertake small scale burns for specific purposes e.g. burning of Puunyart grass for regeneration (a grass is used in basket making). Burning to protect Manna Gums on one of the properties by carrying out small scale burns around the trees. Burning around wetlands is also being planned to help discover any stone fish traps which have been overgrown. Small scale fuel reduction burns are also being considered. Some of the burns are carried out with CFA and DELWP, burns are mostly carried out in Autumn.

Denis explained the Budj Bim Cultural Landscape is patterned by evidence of one of the world’s oldest known aquaculture systems. For at least 6600 years, Gunditjmara have constructed an extensive and technologically sophisticated aquaculture system on the Budj Bim lava flow. By manipulating seasonal flooding through the creation of stone channels they were able to farm and harvest large quantities of the migrating short finned eel while maintaining a sustainable eel population.

Prior to 2010, Lake Condah was highly modified with a drain right through the middle of the lake. 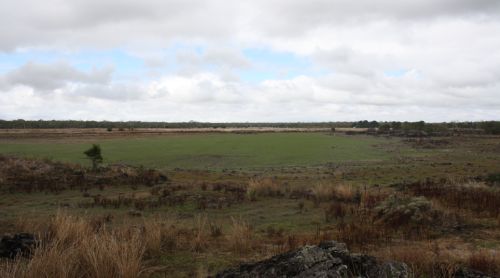 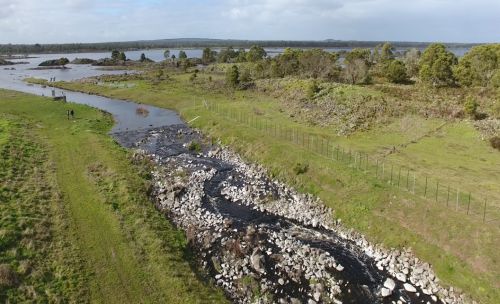 In 2010 a weir was built to reinstate water. Subsequent rains filled Lake Condah to a level that was considered acceptable to the Elders. 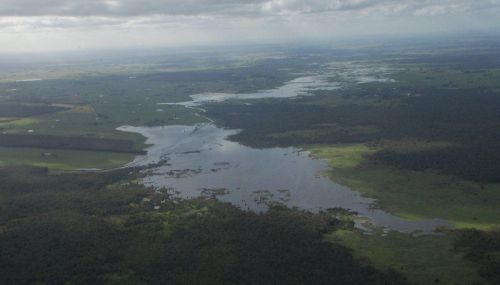 As part of the Lake Condah restoration a number of management plans were prepared;

Denis spoke about the benefits of combining modern research with traditional knowledge. He spoke about a very successful eel migration study published in Freshwater Biology Vol. 59 Issue 8, 2014. A report on the eel study from ARI also stated ‘Given the mutual benefits, further opportunities for involving members of the Indigenous community in natural resource management activities and ecological research should be actively pursued’.

At present there is no carp problem in Lake Condah but monitoring for Carp is being done as it was identified as a potential threat to the system. Redfin were noted early 2017.

There have been recommendations to restore water into the Tyrendarra wetland system but this has to be worked through with neighbouring properties which could be impacted.

Burning around wetlands is done in conjunction with pre burn surveys and only a small selection of wetlands is burnt at any one time to ensure adequate habitat remains in the area for birdlife.

Restoration of Lake Condah has enabled the revival of traditional eel fishing for the Gunditjmara community.

The establishment of a Aboriginal commercial eel harvesting facility on the lake is currently being looked at.

Employment opportunities have been created through increased management of the Budj Bim Cultural landscape.

The work of the Budj Bim project and Lake Condah restoration was acknowledged as being a great achievement from one of the East Gippsland Aboriginal Community, Bairnsdale participants who reinforced the fostering cultural knowledge and understanding by involving the younger generation.

The two-way sharing of traditional knowledge with modern management can be very beneficial in developing partnerships, working together and creating a better understanding of Aboriginal culture.

Mike acknowledged the traditional custodians of the land on which we met. He asked Aboriginal people to recognise their Elders past and present and honour their culture as the first peoples of this land!

Mike spoke about the significance of scarred trees to Aboriginal people because they are beacons in the landscape which tell a story, be it canoe tree, boundary markers, traditional trading and song lines.

Mike spoke about this inaugural program which was a community led partnership, approaching different ways to work on Country. The project fosters ways in which our communities are forever changing and the individuals who are innovating cultural practice today. The program depicts the rich and varied cultural practice from the past to the present.

A cultural journey through time.

The Bark Canoe Project focused on traditional watercraft, building the connection between landscapes – people – fisheries. Watercraft was an important part of Aboriginal life, having the skills to create watercraft from bark, fishing lines from natural fibres and hooks from bone.

Mike mentioned the importance of two way sharing and the fact that both indigenous and non-indigenous students have been involved in learning about Aboriginal culture and interactions with Elders. The project enabled learnings about land and water management building opportunities to develop new skills and engagement with Parks Victoria, DELWP and the Mildura Catchment Management Authority.

The Bark Canoe project has enabled a much stronger connection to culture and Country. It has a life well beyond the initial project and is used a part of a cultural exhibition in Mildura, it also leads the annual NAIDOC week ceremonies as well as various cultural events. 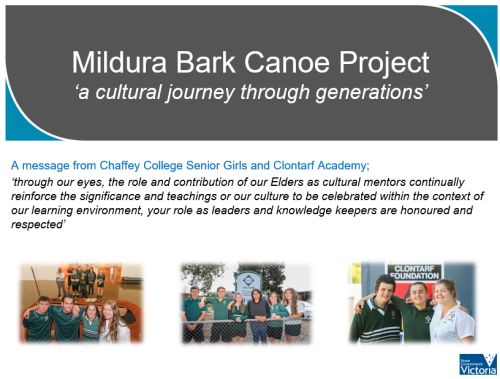 Collecting bark for the project 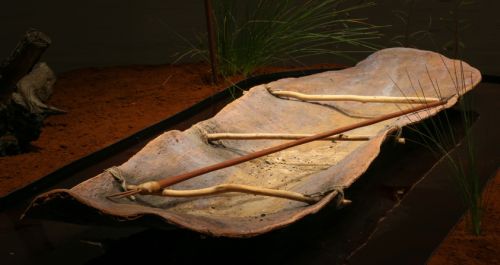 Bark Canoe – this is a practical working canoe which has been used on river. It is also floating on display as a testament to past watercraft.

Telling our story - ‘a cultural journey through generations

Mike spoke about how Indigenous people have had a very long connection with saltwater and freshwater habitats. They had knowledge of fisheries and the aquatic environment and were the first guardians of species in aquatic and surrounding habitats.

Recording traditional customary fishing practices in Victoria provides opportunities for all learners to deepen their knowledge by engaging with the world’s oldest continuous living cultures. This knowledge and understanding will enrich their ability to participate positively in the ongoing development of Victoria’s fisheries.

Mungo Man will be returned from a Museum in Canberra back to his traditional land of Lake Mungo, Mungo National Park on 18 November 2017.

Managing the endangered Spiny Freshwater Crayfish is an issue which has been raised by Traditional owners. Early work is being undertaken at the Native Fish Hatchery regarding captive breeding.

This is an update on Traditional burning at Teesdale, Victoria.

Two burns were carried out at Teesdale in Autumn 2017. One burn was conducted by the CFA and the second burn conducted as a traditional burn.

Craig spoke about Indigenous involvement in discussions which are happening to frame future work which will ensure traditional knowledge is built into Biodiversity Response Plans.

Craig spoke about a book written by Bruce Pascoe; Dark Emu: Black Seeds - Agriculture or Accident? published by Magabala Books. This book looks at Aboriginal life pre-colonisation of Australia with insights showing how Aborigines had a rich and developed culture far in advance of the perception of being simple hunter gatherers.