This page is set up to share information about biodiversity; potential impacts and recovery related to flora and fauna, including collating a list of post fire research projects in areas which have been impacted upon by the January 2020 bushfires in North East & Gippsland, Victoria.

There are many opportunities to contribute to the bushfire recovery efforts through data for wildlife projects, environmental volunteering or looking after your private land.

Members across the community are asked to report sightings of six key species within fire-affected (and neighbouring) areas;

See how to report sightings.

Contribute your images to help researchers understand how species recover from the 2019-2020 bushfire season.

This project brings citizen science wildlife monitoring to four selected regions in East Gippsland over the next 3+ years. It will provide important data on wildlife recovery in high conservation priority areas after the extensive 2019-2020 bushfires. VNPA are partnering with local community groups and landowners, DELWP's bushfire biodiversity recovery program and independent scientists to help fill gaps in knowledge and contribute to strong wildlife recovery and habitat conservation outcomes in the region. From mid-January, 2021, we will be recruiting volunteers to assist with data collection across Autumn and Spring fieldwork seasons. Please get in touch the NatureWatch Coordinator, Sera Blair, to register your interest in joining us for this amazing opportunity or visit https://vnpa.org.au/programs/naturewatch/

There are thousands of nature volunteer groups across Victoria. Use the Environmental Volunteering Opportunities - Interactive Map to find out what projects are near you!

Register your interest in supporting the environmental recovery from the bushfires.

Resources to help and owners navigate recovery after bushfires, including agriculture, weed management and supporting wildlife.

Plant a garden that supports your local wildlife. Additional food and nesting resources can support native species while their habitats recovery.

The January 2020 fires in the North East and Gippsland areas of Victoria have burnt approximately 1.3 million hectares and continue an occurrence of fire in the landscape which has covered almost the entire eastern portion of Victoria over the past 20 years.  Many areas have been subject to repeated fires over the past 20 years, some with short intervals between fires which is likely to have long-term impacts on the ecology of an area, changing species habitats and the ability of some species to sustain healthy populations.

Note: The following maps were compiled from Visualising Victoria's Biodiversity using a layer from The State of Victoria, Department of Environment, Land, Water & Planning FIRE_HISTORY data which represents the spatial extent of the last fires recorded, primarily on public land. The layer stores details of the last time an area was known to be burnt by wildfire or prescribed burning.

The following is a combined listing of threatened species in 6 Local Government Areas (Alpine Shire, East Gippsland Shire, Mansfield Shire, Towong Shire, Wangaratta Rural Shire and Wellington Shire) declared to be in a State of Disaster (3 January 2020) in the fire areas of North East and Gippsland, Victoria. The Mount Buller, Mount Hotham, Falls Creek and Mount Stirling Alpine Resorts are also included in the State of Disaster area.

This list includes all threatened species across the 6 Local Government Areas in eastern Victoria, fortunately some species will have little or no impact due to their habitat or ability to move from fire areas.

* Species not likely to be impacted by fires in North East & Gippsland, Victoria

See also: separate lists of threatened species for each of the 6 Local Government Areas declared to be in a State of Disaster (3 January 2020).

Note: Species geographic range maps are derived from the Victorian Biodiversity Atlas, 2020 and represent all known historic records and do not imply that the species is still present.

A number of Critically endangered native fish have been rescued as part of the East Gippsland Water-life Rescue project. The project is designed to reduce the risk of a species becoming extinct, particularly in cases where their habitat has been impacted by ash and sedimentation entering streams from the fires. By rescuing enough individuals of each species and holding them in a secure aquarium facility it hoped reintroductions can be undertaken when stream conditions become suitable. Other species include; Yalma Galaxias (north of Orbost) and Shaw’s Galaxias. Macquarie Perch have been rescued from the Buffalo River near Abbeyard.

The Mallacoota Burrowing Cray, and Gippsland Freshwater Mussel have also been part of the East Gippsland Water-life Rescue project.

Impact of the Victorian fires on biodiversity - Summary

Impact of the Victorian fires on biodiversity. - Detailed report 23/1/2020 pdf

ARI conducts research into the responses of flora and fauna to fire.

Conservation response to the 2019-20 wildfires

After the catastrophe: a blueprint for a conservation response to large-scale ecological disaster

Research and monitoring of flora & fauna in fire affected areas

Please contact SWIFFT so we can compile a list of who is undertaking what projects on this page.

This study suggests that the 2019–20 bushfires had minimal impact on the immediate (6-months) post-fire occurrence of all assessed native species, including Long-footed Potoroos, in far East Gippsland. However, there was evidence that the severity of the fire did impact site occupancy in 2020. Lace Monitors appear to be the most impacted by the fires with both Long-nosed Potoroos and Long-nosed Bandicoots also being detected at fewer sites post-fire. Long-footed Potoroos were more likely to occur at sites with low fox densities. There was no relationship between the presence of feral cats or wild dogs and the occurrence of any of the monitored species. View full rport

Despite the importance of East Gippsland for biodiversity, surprisingly little environmental research has been undertaken in support of on-ground efforts to conserve, maintain and restore species and ecosystems in the region. Over 100 plant species in East Gippsland are listed as vulnerable or endangered at the national- or state-level, while the status of a further 90 remains uncertain. Many of these plants exist as small and/or localised populations and, for a great majority, their known distributions were severely burnt in the 2019/20 bushfires. More about the project.

Report sightings of six key species within the 2019/2020 fire-affected (and neighbouring) areas.

More about the project.

Weed control can be a very important factor for consideration after a bushfire. There is a brief window of opportunity after fire to have a big impact on many weeds including some early invaders.

The Weeds at the Early Stage of Invasion Project has prepared a feature in the Early Invader Update; ‘Weed management and fire’ pdf. This pdf contains a synopsis of useful weed/ fire related projects and reports which could assist in undertaking weed control programs after fire events.

View the four sessions on SWIFFT YouTube, recorded from 25 Novemebr to 16 December 2020. 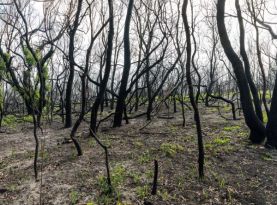